Title: Constraints on the cosmic expansion history from GWTC-3

Status: Submitted to the Astrophysical Journal; Available on Arxiv

The LIGO and Virgo Collaborations recently released their most updated Gravitational Wave catalog, GWTC-3, featuring over 90 confirmed compact binary mergers involving pairs of black holes (BBH), neutron stars (BNS) or a neutron star and a black hole (NSBH). In today’s paper, the collaboration combines information from all these detections to shed light upon important cosmological questions such as the rate of expansion of our universe.

The expansion of our universe causes signals coming from a distance source, be it light or gravitational waves, to be redshifted. The cosmic history of our universe is determined by accurately measuring the distance and redshift of faraway objects using independent methods. These two quantities are related by the Hubble parameter, the value of which is hotly debated thanks to the many uncertainties in distance measurements.

The strength and evolution of gravitational waves emitted by a given pair of colliding compact objects is unique, varying only with their distance as we detect them here on Earth. Hence, they present a distance measurement to cosmologically distant events completely independent of the cosmic distance ladder which relies solely on electromagnetic observations.

In the same way as the constant luminosity of Type Ia supernovae makes them standard candles – their apparent brightness reveals their true distance, compact binary mergers form standard sirens, since detecting the ripples in space-time they produce is akin to listening to sounds. Indeed, LIGO-Virgo’s gravitational wave ‘chirps’ are recorded in audible frequencies!


The gravitational wave (GW) chirp signal morphology primarily depends on the masses of the two merging compact objects. At the detector, we receive an already redshifted signal, and hence infer the redshifted detector frame masses from it. These are greater than the source masses, making the measured signal louder and changing its phase evolution (see Figure 1). 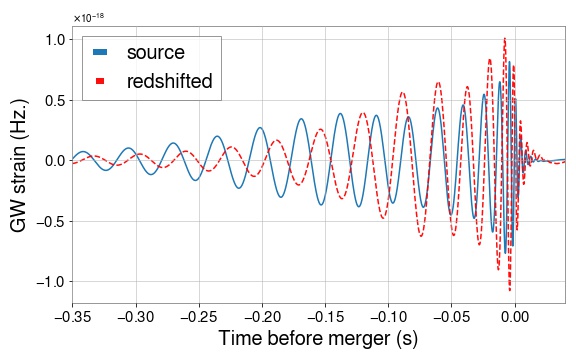 However, as opposed to electromagnetic spectral lines which can be measured in a lab, there is no way of knowing the “true” source masses for a given signal, without knowing how much it has been redshifted.

One way to achieve this is by having an independent, direct observation of the redshift of a gravitational wave source, through an electromagnetic counterpart. This has been done only once, with GW170817, the first binary neutron star detection. Electromagnetic counterparts likely do not occur in binary black hole mergers, while none has been detected in mergers involving neutron stars in this latest set of results.

But even without direct redshift measurements, the sheer number of GW signals allows LIGO and Virgo researchers to string together an increasingly refined estimate of cosmological parameters such as the Hubble constant using two methods: source mass distribution and galaxy catalog matching.

In contrast to electromagnetic redshift measurements where known spectral lines from a source get shifted towards longer (redder) wavelengths, the effect of redshift on GW signals is not so clean.

This is where having a population of binaries can be useful. If we know that astrophysically, black holes in our neighboring universe follow a peculiar (source) mass distribution, then particular features of that distribution will also be altered as we detect the redshifted masses. Since the redshift determines the increase in source masses at the detector, we can flip the argument and the change in these mass distribution features to infer the typical redshifts seen in our population of events.

Owing to our lack of understanding of the initial source population distribution, estimates of the Hubble constant using this method have large uncertainties (see Figure 2).

The other method of determining the redshift of a bunch of GW events, is to try and figure out from which galaxy they might have originated in by referring to the GLADE+ galaxy catalog.

Each GW source comes with uncertainties in its 2-dimensional sky localization. Accordingly, every known galaxy in this part of the sky is assigned a probability of hosting the GW source. Since the redshift of all galaxies is observationally known, the GW distance measurement can be used to assign a statistical Hubble constant distribution to each event. 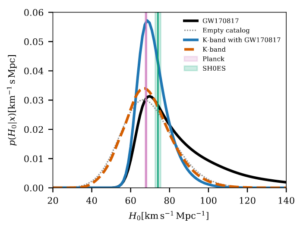 Figure 2: Hubble constant estimation from the Galaxy matching method (dashed orange line), and when combined with the GW170817 BNS observation (solid blue line). The estimates from the first method based on mass distributions is given by the dotted line. Fig. 8 in the paper.

This approach comes with several caveats, such as completeness of galaxy catalogs and their consistency across various observational bands, as well as errors in measurement of their redshifts. The estimation of the Hubble constant by combining the statistical distributions from all events is given in Figure 2.

Not long since the first GW detection was made in 2015, we are now diving steadfast into the GW Astrophysics era, where we use populations of neutron star and black hole binaries to answer fundamental questions including the cosmic history of the universe. This is a soup that will only be enriched with more ingredients, and the addition of events from future observing runs will surely give us tighter, tastier constraints on cosmological parameters.