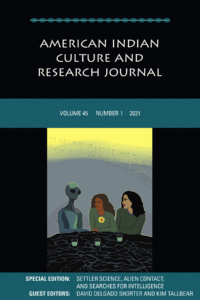 Astronomers have long sought to answer the question, “are we alone?” But, how can we effectively and ethically search for extraterrestrial life, when contact among “intelligent” groups and species on Earth has such a disastrous history? The American Indian Culture and Research Journal (AICRJ) released a special volume in December 2021 focused on astronomy and space sciences, especially the Search for Extraterrestrial Intelligence (SETI). Many of the authors also took part in a Zoom webinar in February 2022 to discuss their work. The volume was inspired by four of the authors’ experiences as the Indigenous Studies Working Group reporting to Breakthrough Listen (BL), a major SETI collaboration. BL posed the question, “What would you most want SETI scientists to know about potentially making contact [with extraterrestrial life]?”

In May of 2018, Sonya Atalay, William Lempert, David Shorter, and Kim TallBear shared their response to this question. All four are involved in academic work involving indigenous studies, while only Atalay and TallBear are themselves members of indigenous communities. Focusing on BL’s self-description and website, the working group analyzed the ethics of ongoing SETI research. They expressed concern regarding BL’s lack of discussion of the ethics and protocols for contact. They also note the complexity of terms often used in SETI, like “advanced civilizations” and “intelligence,” which are both very contextual and subjective concepts. Ultimately, the working group recommended the creation of a statement of goals and best practices for SETI/contact. Such a statement would include:

Atalay also emphasized that intent does not equal impact, and avoiding harm must be a priority, and Lempert discussed the history of violence in “contact” scenarios on Earth which resulted in violence and colonialism.

Shorter’s piece On the Frontier of Redefining “Intelligent Life” in Settler Science discussed the language of SETI, in the context of the terms’ histories in colonialist endeavors. NASA’s High Resolution Microwave Survey, a major SETI observing program which was canceled only a year after its start, launched intentionally on the 500th anniversary of Columbus’ arrival in America in 1492, signifying the colonialist motivations behind space exploration. The constant use of terms like frontier, pioneer, and even manifest destiny in these fields harkens back to a violent past. By using these terms in the context of positive progress, SETI implies that this colonialism is a good thing and a goal to aspire to in space. Ultimately, SETI scientists must look beyond our anthropocentric and Eurocentric notions of “intelligence,” “advancement,” and even “life” in order to realistically and ethically search for extraterrestrial life. Intelligence can be measured in many different ways, none of which are objective, and advancement on one axis does not mean advancement in all aspects of society.

“By directly addressing the history of colonialism, and by making good relations with the original communities and nations of our planet, we can ethically explore space and perhaps contact life on other planets.” – David Shorter

Lempert’s From Interstellar Imperialism to Celestial Wayfinding: Prime Directives and Colonial Time-Knots in SETI drew from the historical HMS Endeavour journey to measure Venus’ transit in 1769, as a striking example of how imperialism is often intertwined with science. The journey was praised for its scientific success, but the captain, James Cook, was under covert orders from the British monarchy to annex as much land as possible in the Pacific. This article emphasizes that scientific missions, whether intentionally or not, often contribute to imperialist conquest. Referencing Star Trek’s “prime directive” and the many times the crew broke that rule, Lempert explores SETI’s “prime directive” of “just listening.” For now, we are only listening, but if/when ET life is discovered, we cannot control how humanity might react/respond.

“This is not to say that science is inherently harmful, but rather that it has and remains deeply intertwined with imperial power.” – William Lempert

Rebecca Charbonneau’s Imaginative Cosmos: The Impact of Colonial Heritage in Radio Astronomy and the Search for Extraterrestrial Intelligence addressed SETI’s complicated history and relationship with colonialism. Along with SETI’s colonialist language, the history of radio astronomy is riddled with telescopes built with military ties and on stolen land (e.g. Arecibo Observatory). Some SETI scientists, such as Carl Sagan, have made efforts to incorporate interdisciplinary viewpoints, but much more work must be done in this area. Charbonneau also studies SETI as a reflection of humanity, and how practitioners perceive themselves and their species.

“Astronomers’ simultaneous embrace of this historical projection and unease with its implications illustrates the unsettled nature of the physical, social, and disciplinary grounding always implicit in their search” – Rebecca Charbonneau 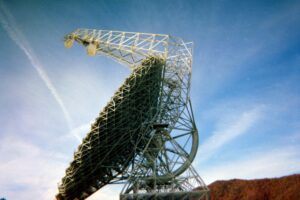 David Maile’s piece On Being Late: Cruising Mauna Kea and Unsettling Technoscientific Conquest in Hawai‘i comes from personal experience, as a Kanaka Maoli (Native Hawai’ian) scholar and activist. Maile is a proponent of “writing the land back,” or using scholarly work to support direct action. The construction of the Thirty Meter Telescope has been planned for Mauna Kea, the mountain most sacred to Indigenous Hawai’ians, since 2009. See this Astrobite and the follow-up Astrobite for more information on this conflict. Maile explores the colonialist history of astronomy in Hawai’i and the Kanaka Maoli resistance against settler science, focusing on lateness. Protests on Mauna Kea have been considered “late” as some telescopes already exist on the mountain, in contrast with the way native Hawai’ians have successfully forced additional delays and costs on TMT construction.

“It’s okay to be late to the struggle.” – David Maile

Who’s jurisdiction do aliens fall under?

Fantasia Painter explored the government’s role in ET contact and jurisdictional considerations in G-Men, Green Men, and Red Land: Extraterrestrial Miscreants, Federal Jurisdiction, and Exceptional Space. Who decides how to proceed if ET life arrives on Earth? The FBI’s records of cow mutilations (which many attributed to aliens/UFOs) occurring across the country in the 1970s show the struggle over federal jurisdiction, as the FBI initially avoided the issue, and local police forces did most of the investigation. The bureau ultimately decided that they would only investigate the occurrences on reservation lands. This leads to interesting considerations regarding jurisdiction in the case of ET life landing on Earth. Colonial conquests in America have been highly bureaucratic and legal, while imaginations of ETs paint a very different picture of a rapid and chaotic colonial takeover. Painter emphasizes that contact and colonization are both long-term processes, not instantaneous events.

“What happens the day after the apocalypse?” – Fantasia Painter

Indigenous vs. Settler Attitudes About the Unknown

In the volume’s commentary section, Suzanne Kite contributed “What’s on the earth is in the stars; and what’s in the stars is on the earth”: Lakota Relationships with the Stars and American Relationships with the Apocalypse. Kite explores how the fear of the unknown, which many American settlers hold, leads to conspiracy theories, highlighting the ties between nuclear warfare and UFOlogy. Leveraging these fears of aliens and supernatural beings, colonizers are able to idealize themselves as instead the colonized, in a “move toward innocence.” These attitudes are in sharp contrast with the Lakota’s respect for the unknown. Respect rather than fear of the unknown is instrumental in ethically interacting with potential ET life.

Kim TallBear concluded the volume with a creative nonfiction piece, Close Encounters of the Colonial Kind, which depicted the tenuous relationships between indigenous scholarship and settler-based fields.

“He believes two things simultaneously, that a civilization that sends signals is advanced, yet not fully alive. ETs too are his noble savages.” – Kim TallBear

The AICRJ issue introduces some very important ideas regarding contact with potential ET life, and SETI researchers and other space scientists must consider indigenous perspectives deeply in order to move forward in our fields. Ultimately, answering the question “are we alone?” ethically and accurately requires a deeper look into who “we” even are.