A puppy chasing its tail: The Event Horizon Telescope’s observations of Sgr A*, part 2

Title: Focus on First Sgr A* Results from the Event Horizon Telescope (papers I-VI from the EHT’s observations of Sgr A*)

Waiting for cool scientific results is hard, but combining data from telescopes scattered across the globe is harder. Unfortunately, to take a picture of a supermassive black hole, that’s exactly what you need: an ensemble of radio telescopes on four continents. The Event Horizon Telescope (EHT) Collaboration has spent the past five years doing just that, using a selection of radio telescopes to take data from a host of supermassive black holes and then combining that data to form images. Their first results, on the black hole at the center of the galaxy M87, were released in 2019, but yesterday the collaboration released a new image: a picture of Sagittarius A*, the black hole at the center of our galaxy. In our last post, we discussed how the EHT works and what it expected to see. Now, let’s discuss the challenges behind imaging Sgr A* and what the group actually found.

Even before the two supercomputers the EHT uses, at MIT and the Max Planck Institute for Astronomy, could perform analyses, the data had to be physically transported from the observatories. 5 petabytes of files aren’t something that can be sent electronically; instead, the half-ton of hard drives that stored them had to be flown across the world. This was even more challenging for the data collected at the South Pole Telescope, where the chills and snow of winter mean planes are stuck in Antarctica until from February until October of each year. While data was gathered in April of 2017, it didn’t all arrive at the supercomputers until the following winter.

The team then began the long, painstaking process of combining several nights of data from eight observatories into images, using several different algorithms. This was particularly difficult for Sgr A*, which is about 1000 times less massive than M87*. This means that the gas swirling closely around it completes an orbit much more quickly, so the emission varies on timescales on the order of minutes to hours, not the days to weeks taken by matter orbiting M87*. Chi-kwan Chan, an EHT astronomer from the University of Arizona, compared the challenge to taking a picture of a puppy chasing its own tail. No wonder, then, that it’s taken five years to get an image. 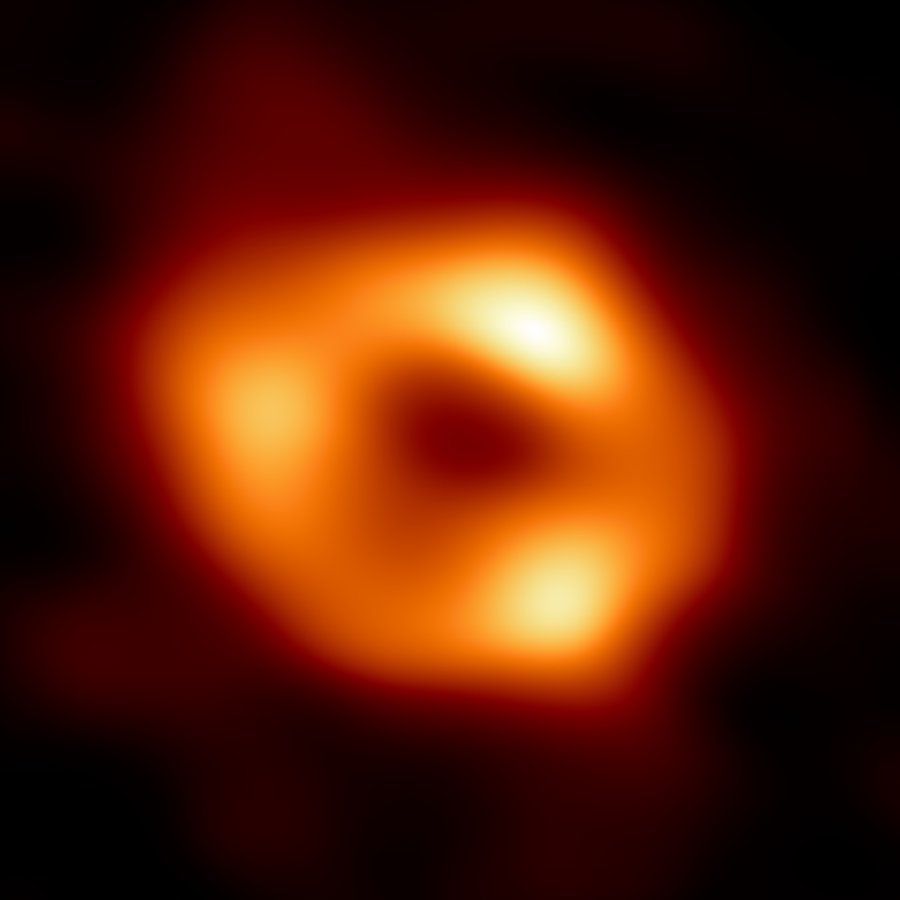 Figure 1: This is the long-awaited image of Sgr A* created by the Event Horizon Telescope. The photons from matter close to the black hole are visible as a doughnut-shaped ring, while the shadow is prominent. Three bright knots are visible, which may be the result of strong regions of the magnetic or may be imaging artefacts. Image credit: The Event Horizon Telescope Collaboration.

And what an image it is! As with M87*, the EHT’s observations of Sgr A* show a doughnut, tracing the projection of the black hole’s photon sphere. (Given the variability of Sgr A*, this is actually a time average of what the telescopes saw.) However, there are some differences. For example, the M87* image shows an asymmetry arising from the rotation of the black hole and a phenomenon called Doppler boosting, but the Sgr A* image appears to instead include three bright knots. These might be real – we expect some bright spots due to variations in the strength of the magnetic field – but they also might simply be observational artefacts due to the position of the telescopes that make up the EHT and the image processing methods used.

The image alone is beautiful, but the EHT team was able to glean so much more information from their data. They provided new constraints on its mass, placing it at 4 million solar masses. Their models also showed that the black hole’s rotation axis happens to be pointed close to us, which is surprising, and that it is rotating, which is unsurprising – we do expect that all black holes spin at least a little, which can complicate models but yield a host of interesting information. Unfortunately, the team was unable to perfectly model the variability of the light curve of Sgr A*. This could be due to any of a number of factors: slow, long-term variations, complications in the structure of its magnetic field, or simply improper assumptions about the physics used in the models.

What comes next? Well, the collaboration has data from three more observing runs and counting, along with any remaining unpublished observations from 2017. The addition of more telescopes should allow for better images, possibly accompanied by “movies” showing the black hole’s emission changing over various timescales. Perhaps we’ll gain more insight into the knots surrounding Sgr A* – or perhaps we’ll see something unexpected around it or M87*, or one of the EHT’s many other targets. Regardless, though, the Event Horizon Telescope’s results are mindbogglingly impressive – a testament to the power of international scientific collaboration

90 years in the making: The Event Horizon Telescope’s observations of Sgr A*, part 1

A tale of three Rs – Radio, R-process and collapsaRs!