90 years in the making: The Event Horizon Telescope’s observations of Sgr A*, part 1

Title: Focus on First Sgr A* Results from the Event Horizon Telescope (papers I-VI from the EHT’s observations of Sgr A*)

The question of what lies at the center of the Milky Way has taken the better part of a century to answer. In 1932, Karl Jansky conducted observations that detected radio waves every time his telescope swept across part of the constellation Sagittarius. In the early 1950s, Jack Piddington and Harry Minnet localized this emission to the Galactic center, encompassing a large region known as Sagittarius A. A stronger radio source near the middle, Sagittarius A* (Sgr A* for short), was discovered by Bruce Balick and Robert L. Brown in 1974. Astronomers began to postulate that this object was a supermassive black hole, an idea later supported by the Nobel Prize-winning work of Andrea Ghez and Reinhard Genzel, who showed that the source must be a compact object by observing the motion of stars around it. These are only a few of the thousands and thousands of people who have played a role in this 90 year-long quest. 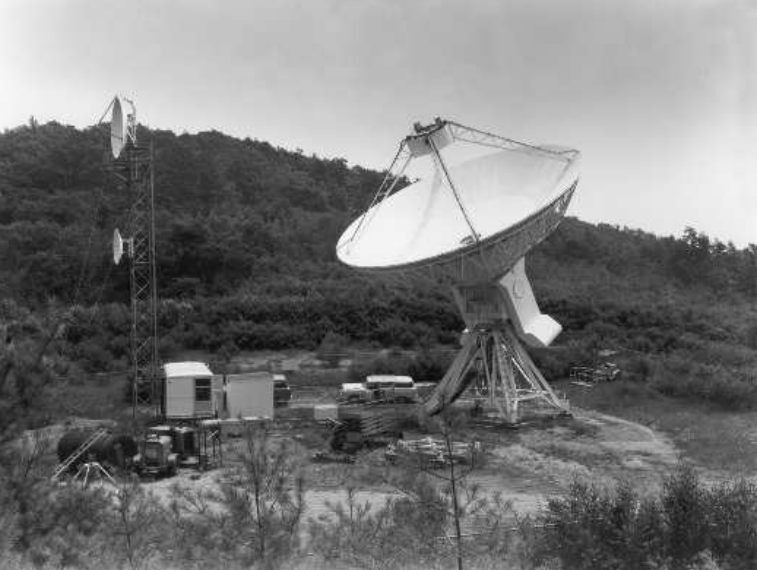 Figure 1: In 1974, Bruce Balick and Robert L. Brown used this 45-foot radio telescope in Huntersville, West Virginia, as an outrigger for the interferometer in Green Bank 35 km away. This 35-km baseline improved the interferometer’s angular resolution, allowing the astronomers to discover and localize Sgr A*. Image credit: Fig. 2, Goss et al. 2003.

Yesterday, the world learned that the Event Horizon Telescope Collaboration had taken another step forward. Using radio telescopes observing at wavelengths of approximately 1.3 mm, the group created the first ever images of Sgr A*. When viewed in false color, they show a knotted, doughnut-shaped object surrounding a dark central hole. Today, in a two-part bite, we’ll discuss what the Event Horizon Telescope is, why the black hole at the center of our galaxy looks like a doughnut, and what we can learn from it.

We’ve grown to believe that, like the Milky Way, most galaxies host one or more supermassive black holes at their centers. These beasts can range in size from millions of times the mass of the Sun to potentially tens of billions of solar masses. Sgr A* is fairly tame; it falls at the lower end of this mass range, at about 4 million solar masses, and it isn’t accreting anywhere near as much as the supermassive black holes at the centers of active galactic nuclei (AGN). Understanding Sgr A* and its cosmic counterparts is key to developing models not just of AGN, but of how galaxies themselves form and evolve. So how can we make precise, detailed observations of these supermassive black holes? Enter the Event Horizon Telescope.

The Event Horizon Telescope, or EHT, isn’t actually a single telescope; instead, it’s a collection of radio telescopes scattered across the globe. The first EHT observations, conducted in 2017, involved eight observatories on four different continents. Since then, the menagerie has only continued to grow, with the collaboration now encompassing over 350 researchers from over 100 institutions. Why bother with such a complex system? Why in the world would astronomers need to coordinate observations between telescopes in Antarctica, Hawaiʻi, Spain, Chile and beyond? 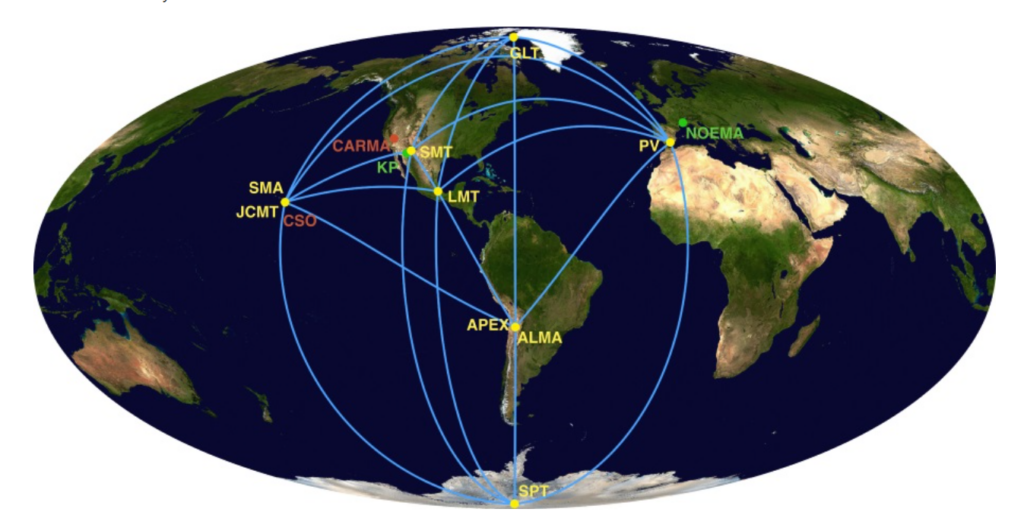 Figure 2: The Event Horizon Telescope uses observatories around the world. In yellow are telescopes used in 2017 and 2018, in green are telescopes added since or soon to be added, and in red are legacy sites no longer used by the EHT. The blue curves represent the imaginary baselines between telescopes which determine the angular resolutions the EHT can reach. Image credit: Fig. 1, The Event Horizon Telescope Collaboration et al., 2019 (the second EHT paper on M87*).

The answer comes from one of the many demons of astronomy: angular resolution. Due to diffraction, any single-dish telescope can only discern angular separations above some scale determined by the dish’s diameter and the wavelength it’s observing at. If you’re trying to observe a point source, like a pulsar, this isn’t really a problem, but if you want to take high-resolution images of an extended object, it can be a significant barrier. To get around this problem, astronomers sometimes build sets of many dishes called interferometers, like the Very Large Array (VLA) or the Atacama Large Millimeter Array (ALMA). The angular resolution of an interferometer is limited by the longest distance between any two of its constituent dishes, not the size of individual dishes. In this way, smaller dishes can be separated by tens of kilometers and reach resolutions which would otherwise require impossibly large single-dish telescopes.

Normal interferometers are usually suitable for relatively high-resolution radio imaging. However, supermassive black holes have small angular sizes; Sgr A* appears about as small to us as a doughnut on the Moon. This makes it impractical to try to resolve them using even the VLA or ALMA – building dishes tens of kilometers apart is no longer enough. To reach angular resolutions small enough to see the inner region around these black holes, the EHT team needs to use existing telescopes scattered thousands of kilometers apart across the world, reaching the resolution achievable by a single-dish telescope the size of Earth. (In fact, ALMA itself is one part of this global ensemble!) 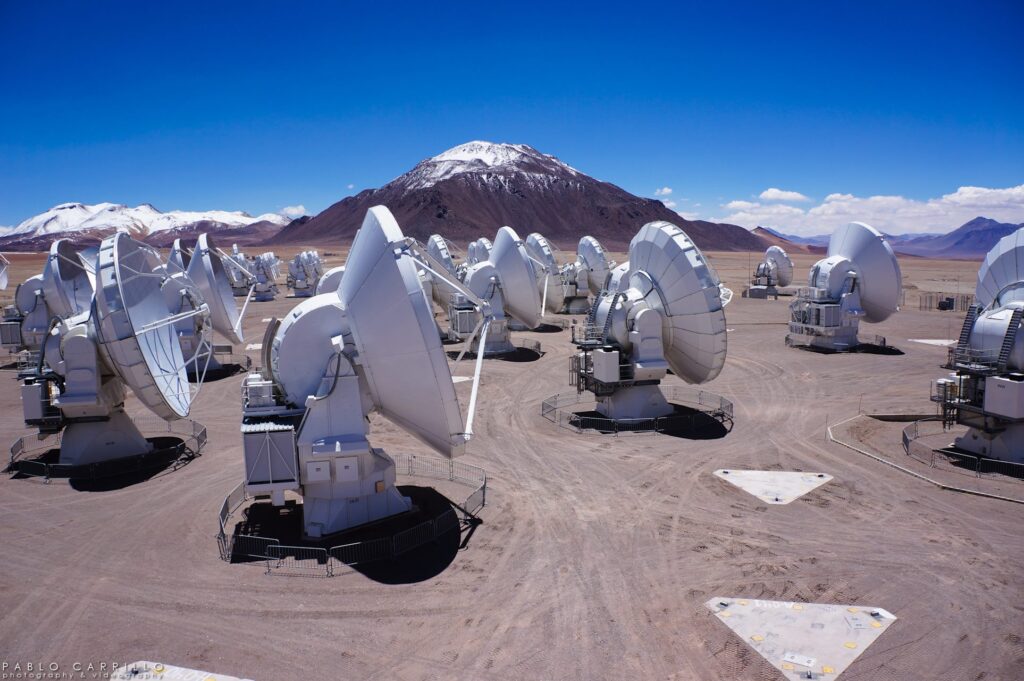 Figure 3: The Atacama Large Millimeter Array, in Chile, is both an impressive instrument in its own right and a key component of the Event Horizon Telescope. Image credit: NRAO/AUI/NSF.

The Event Horizon Telescope collaboration was formed about a decade ago after years of white papers and exploratory observing campaigns. It made its first set of observations over the course of a week and a half in April 2017, using eight telescopes to study Sgr A* and several other supermassive black holes. In the five years since, the EHT has added even more telescopes and embarked on three additional observing runs, in 2018, 2021 and 2022. The vast majority of this data is still being analyzed, but in 2019, we were treated to the first results: images of the black hole M87*, lying at the center of the active galaxy M87. This magnificent object appeared differently than you might have expected: a bright doughnut with a dark center. What gives?

Supermassive black holes are usually surrounded by swirling structures of extremely hot gas. The dynamics of this gas are influenced by what is referred to as the innermost stable circular orbit, or ISCO, which lies 3 Schwarzschild radii from the center of the black hole. Parcels of matter which venture inside the ISCO cannot orbit stably and will take trajectories that likely end up at the black hole’s event horizon. Along the way, the gas will emit photons, just like matter in the accretion disk. Thanks to the powerful gravitational pull of the black hole, this light will travel in dramatically curved paths through space. As the inspiraling matter approaches 1.5 Schwarzschild radii, some of these paths bend all the way around the black hole more and more times. At this distance lies the photon sphere, the distance at which photons can orbit the black hole – or, put another way, the distance at which photons could circle the black hole an infinite number of times.

This is what produces the bright ring we see in the images from the Event Horizon Telescope: many, many photons corresponding to the many, many paths that circle the black hole many times, originating from matter outside the photon sphere – not light from the black hole itself. Due to general relativity, the ring appears to lie at approximately 2.6 Schwarzschild radii instead of 1.5 Schwarzschild radii, the actual radius of the photon sphere. Light emitted from within the photon sphere, on the other hand, is more and more likely to end up at the black hole’s event horizon instead of any outside observer. Therefore, we see fewer photons within the projection of the photon sphere, and the ones we do see experience severe gravitational redshift. This means the region inside the projected ring is extremely dark – which is why it’s dubbed the black hole’s “shadow”. The actual images we see don’t show a thin ring, but instead a smeared-out, doughnut-shaped object. This is because the EHT, while spectacular, doesn’t have perfect angular resolution and isn’t perfectly sensitive at all angular scales. 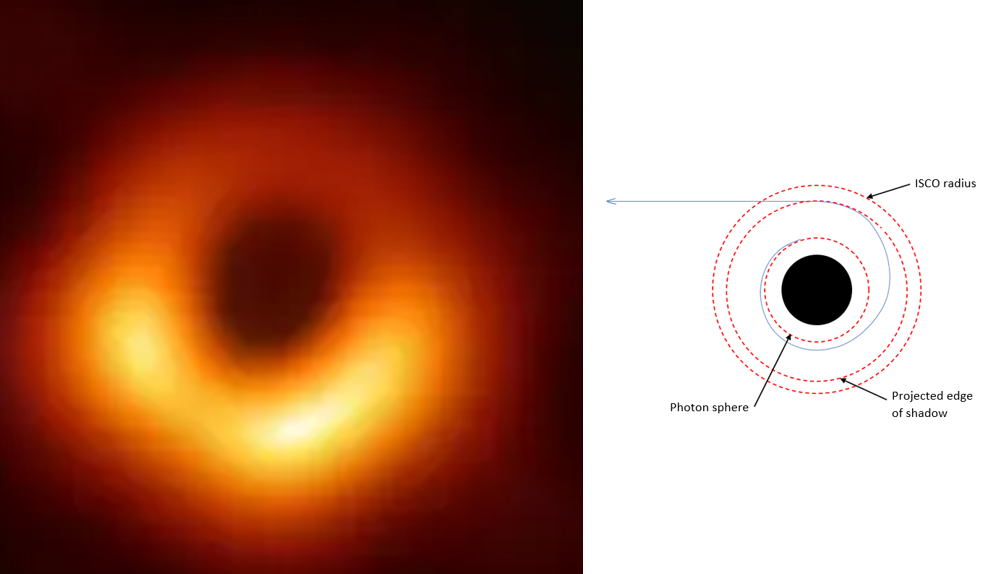 Figure 4: The bright ring we see is a projection of light from just outside the black hole’s photon sphere. Within the innermost stable circular orbit, infalling matter usually reaches the photon sphere, at which photons orbit the black hole. Just outside this, photons reaching Earth often circle the black hole many times, meaning we see photons from many paths, leading to a bright projected ring. Due to the finite resolution of the telescope, the ring actually appears much wider than it really is. Image credit: Diagram created by the author using the image of M87* taken by the Event Horizon Telescope Collaboration.

Last year, the EHT revealed another set of images of M87*, using the polarization of its light to trace the black hole’s magnetic field. These images were sandwiched in between the publication of results on the powerful jets emitted by supermassive black holes from two other active galaxies, 3C 279 and Centaurus A. All the while, however, the world waited with bated breath for news about the observations of Sgr A*. The black hole at the center of our galaxy appears the same angular size as M87*; while M87* is farther away, it is also much more massive and therefore physically larger. Both of these sources have larger angular sizes than the other black holes the EHT studied, which appear too small for us to see their shadows. Only Sgr A* could reveal a second doughnut – and so we waited.

Just as the world had to take a break, so too will we. In our next post, we’ll talk about the EHT’s observations of Sgr A* and the image we waited five years to see.

A puppy chasing its tail: The Event Horizon Telescope’s observations of Sgr A*, part 2