Status: Accepted for publication in the Astrophysical Journal, available on arXiv

Current theories suggest that most galaxies — if not all — contain a supermassive black hole in their centre, with masses anywhere from millions to billions of times that of our Sun. This theory was bolstered in 2019, when the Event Horizon Telescope took the first ever photograph of a black hole in the centre of the nearby elliptical galaxy M87, and in 2020, when Reinhard Genzel and Andrea Ghez were awarded the Nobel Prize in Physics for discovering a supermassive black hole at the centre of our own galaxy.

With their enormous density and gravitational fields, black holes are some of the most extreme objects in the Universe. Consequently, material that is pulled towards a supermassive black hole can be accelerated almost to the speed of light. If enough material is present, it can form an accretion disk — an incredibly hot structure that feeds material into a black hole and converts this mass into energy, which is emitted as light. A supermassive black hole surrounded by an accretion disk is known as an Active Galactic Nucleus, or AGN, as shown by the artist’s impression in Figure 1. 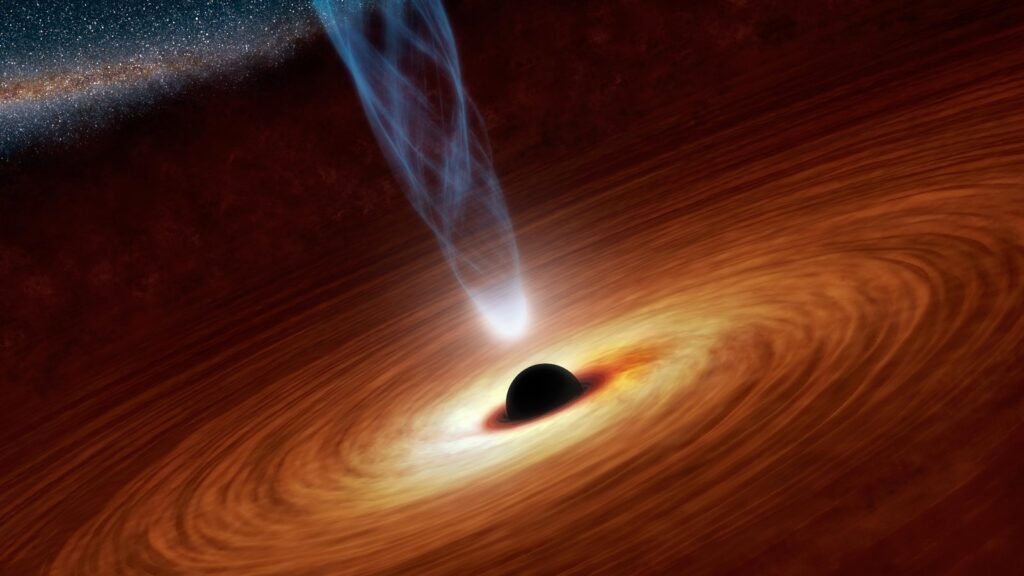 Figure 1: Artist’s impression of an AGN, with a central black hole surrounded by a flat, rotating accretion disk. Some AGN emit narrow, powerful jets of material — this can be seen above the black hole. Credit: NASA/JPL-Caltech (link).

AGN are incredibly efficient engines. Around 10% of the mass that is accreted by an AGN is converted into energy (this efficiency is about 0.7% in nuclear fusion, and just one billionth of a percent in typical combustion). As a result, AGN emit huge amounts of light, and are some of the brightest objects in the Universe. But, like all engines, AGN need an ignition: a trigger that can cause a dormant supermassive black hole to start accreting material and become an AGN. Today’s paper explores one mechanism, which could be responsible for switching on AGN in galaxy clusters.

Galaxy clusters are huge objects containing up to several thousand galaxies. Between these is a sea of hot gas, the intracluster medium (ICM). As galaxies sail through this ocean, drag forces from the ICM can cause gas in the galaxies to be stripped away, leading to tails of gas streaming out in their wake. This process is known as ram-pressure stripping. In this work, the authors investigate whether these stripped galaxies are more likely to have an AGN in their centres.

To do this, they use observations of 115 galaxies that are currently undergoing ram-pressure stripping within clusters, taken from multiple different astronomical surveys. These galaxies are compared to a control sample of 782 star-forming galaxies taken from field regions (i.e. not in clusters) of the MaNGA survey. These galaxies are then tested to see whether they contain AGN, by looking at their emission of light at different wavelengths and placing them on a BPT diagram (a commonly used method for identifying AGN).

There are two main findings in this paper. Firstly, ram-pressure stripped galaxies are roughly 1.5 times as likely to host an AGN in their centre, compared to the control sample (see Figure 2 for two example galaxies). Additionally, larger galaxies are far more likely to contain AGN, particularly those with stellar masses greater than 1010 solar masses. The authors find that 27% of their stripped galaxies contain AGN, compared to just 18% of the field galaxies. When just looking at large galaxies, AGN are found in 51% and 35% of their stripped and control samples, respectively. 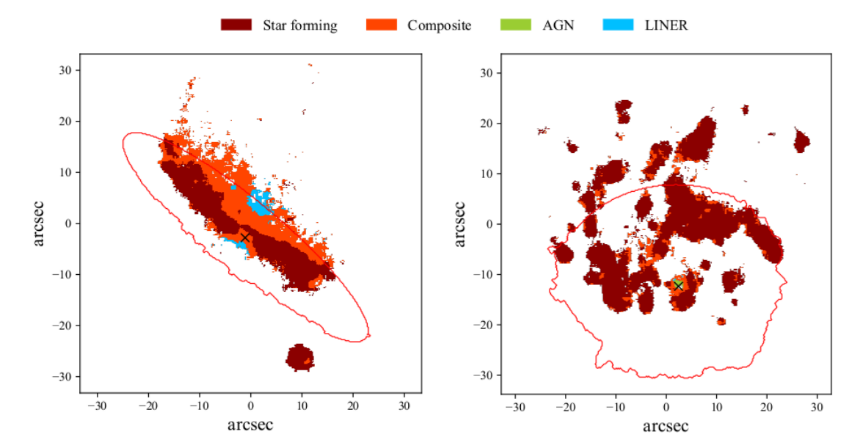 Figure 2: Examples of two ram-pressure stripped galaxies from today’s paper. The gas in these galaxies is shown in red and orange, and the AGN regions are shown in green and blue — some AGN are identified indirectly by LINER emission. The red contours show the edge of the galactic disks, demonstrating how the gas has been stripped away and is trailing behind the galaxies. Adapted from Fig. 1 in today’s paper.

These results are exciting, and tell us that there is a close connection between AGN and ram-pressure stripping. One potential explanation comes from the fact that the ICM, which causes the stripping of a galaxy’s gas, can also increase the external pressure on a galaxy. This pressure can compress the gas in the galaxy, triggering star formation and causing gas to spiral inwards towards the galaxy centre, resulting in the formation of a luminous accretion disk. Furthermore, triggering an AGN can result in gas being thrown out of a galaxy, leading to the tails of jettisoned gas that are attributed to ram-pressure stripping.

There are several caveats in this paper. For example, this work only compares field galaxies to a very specific type of cluster galaxies — those with clear signs of ram-pressure stripping. The authors address this, and explain that future studies involving larger numbers of galaxies will be able to constrain their results even further.

Clearly, ram-pressure stripping isn’t the only possible cause of AGN ignition: one third of the non-stripped galaxies also contain AGN, showing that there are plenty of other factors at play here. However, the impact of ram-pressure stripping shown in this paper is a valuable clue, and will help us move towards a better understanding of what causes these huge cosmic light bulbs to switch on.