For 5 days in April of 2017, 8 radio telescopes on 4 continents all pointed in concert at Sagittarius A*, the supermassive black hole at the center of our galaxy. During this observing campaign these 8 telescopes effectively became one Earth-sized radio telescope, the Event Horizon Telescope (EHT). Using hydrogen maser atomic clocks to track the difference in the arrival times of the radio signal at the various telescopes, the far-flung array can emulate a single telescope with an effective diameter equal to that of our planet, a technique called very long baseline interferometry (VLBI). Figure 1. The Event Horizon Telescope network. The nodes are the individual radio telescopes that make up the network, and the connections are the baselines between them. (Image Credit: ESO)

The goal of the EHT project is to directly image the immediate environs of a black hole, a region that has been inaccessible with light thus far. The unprecedented angular resolution achieved by the EHT is approximately 50 micro arcseconds (approximately the resolution needed to see an apple on the surface of the moon from your house), not coincidentally the same angular size on the sky as the event horizon of Sgr A* and that of the super-massive black hole at the heart of the elliptical galaxy M87. While M87 is much farther away than the Galactic Center, the mass of its central black hole is

solar masses, about 1500 times more massive than Sgr A*. Since the size of the event horizon scales linearly with the mass of the black hole, the angular sizes subtended on the sky by the event horizons of Sgr A* and M87’s black hole end up being comparable.

Alongside the recent successes of gravitational wave astronomy, the EHT is another way to probe the  ‘strong-field’ gravitational regime and provide long-awaited answers to questions about general relativity. Specifically, the EHT uses mm-wavelength radio astronomy to trace the extremely hot gas that is believed to inhabit the area directly outside the event horizon of the black hole. General relativity predicts that a silhouette, or ‘shadow’, will be seen imprinted onto the image of the hot gas, the distinct signature of the black hole’s event horizon (See Fig. 2). Today’s paper looks at ways to test general relativity, alternative theories of gravity, and the quantum structure of space-time by studying the size and shape of this shadow. 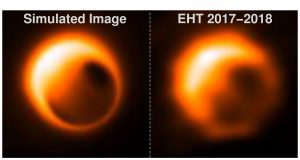 Figure 2. At left: A simulated image of Sgr A* showing the hot accretion flow. The light coming from the hot gas is lensed by the strong gravity and forms a ring that encircles the distinctive shadow of the black hole. The ring is brighter on the approaching side and dimmer on the receding side due to Doppler effects. At right: The expected performance of the EHT array during its 2017 observing run. [arxiv:1409.4690]

In general relativity, the event horizon of a Schwarzschild (non-spinning) black hole should be perfectly circular and its radius should scale with the black hole’s mass as

is mass of the black hole,

is the speed of light. In the more astrophysically realistic case where a black hole has spin, described by the Kerr metric, the event horizon will still look very circular unless the spin is exceptionally large and the inclination angle is high (line-of-sight is near the axis of rotation). However, in beyond-GR theories the event horizon can be asymmetric, and the size can vary.

In this paper the authors study the observable effects of what they call ‘soft quantum modifications’ on the black hole shadow. What this really means is that instead of the space-time being smooth and well described by general relativity, it takes on a jittery quantized behavior at certain length scales. A bumpy space-time may sound strange, but is not completely uncalled for, and such an approach is well motivated by a variety of outstanding issues (see Bites on: hairy black holes, quantized gravity, and the black hole information paradox).

Figure 3. Possible shapes of the event horizon that can result from small perturbations to the black hole’s structure. Left and right show different phases of the same perturbation mode. One should imagine the black hole pulsating back-and-forth between these shapes. The blue circle shows the shape of the event horizon in the regular non-spinning general relativistic (Schwarzschild) case. (Figure 5 in the paper)

The authors allow small changes (perturbations) to the structure of the black hole space-time (the metric), of the sort that might be allowed in a reasonable theory of quantum gravity. They then calculate what the shape of the horizon looks like under these perturbations (Fig. 3), and the effect that this has on the path that light takes around the black hole.  The authors find that introducing these small changes to the structure of the black hole space-time can have significant and time-dependent (not to mention beautiful) effects on the shape of the shadow that is cast onto the image of the bright gas (see Fig. 4). If these effects exist, they could in some cases be easily distinguished from their cousins, the more staid classical black hole shadows. However, they observe that in their model the dynamical variations in the shadow have a characteristic time-scale that is proportional to

the mass of the black-hole. In other words, the less massive the black hole, the more time that will pass between noticeable variations in the black hole’s shadow.  This period ends up being just too long for observations of Sgr A*. That is, while the observations of Sgr A* taken in April may be able to resolve strange, non-circular shapes (if there are quantum gravitational perturbations at all!), we will not be able to see the shape of the horizon changing. However, because M87 is so much more massive, its characteristic pulsation period is short enough to capture in a typical EHT observation. 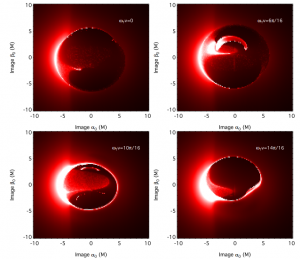 Figure 4. A simulated image of the effect of the quantum perturbations on the light coming off the hot gas near the black hole. (Figure 9 in the paper)

This paper is a worthwhile and fun exploration of possible effects that a quantum structure of space-time could have on black hole shadows, but there are some limitations. The ‘soft quantum modifications’ were made only for non-spinning (Schwarzschild) black holes. Extending these methods to the spinning case is not trivial, but there are reasons to believe that the results will be at least qualitatively similar. Most importantly however, those searching for hints of a theory beyond General Relativity in black hole shadows now know what to look for.

While the EHT observations were performed in April, the results are not out yet. VLBI techniques require significant data processing, and the team only just received the data taken by the South Pole Telescope (the node that provides the longest baseline) via the sneakernet. There are no flights out of the South Pole during the austral winter and too much data to send via the internet (even if it wasn’t the strictly bandwidth limited TDRSS network that provides the South Pole station’s connection!). While it remains to be seen, it’s possible that the first direct image of the event horizon of a black hole is sitting in the data, just waiting to be pieced together, and with it possible clues about the quantum structure of space-time.