Students on the Hunt for Black Holes

This is a guest post from astrobitos by Ana Torres Campos.

Inside the Large Millimeter Telescope Alfonso Serrano (LMT), at an altitude of 4500 meters above sea level, Queen’s “Don’t Stop Me Now” can be heard in the background while a group of people cheer and shake hands after successfully concluding an observation run for one of the most important astronomical projects in the last years: The Event Horizon Telescope (EHT). This project aims to obtain, for the first time ever, the image of the projected shadow of the supermassive black hole at the center of our galaxy, as well as the one in M87.

In this post I share my personal experience as a guest of the team responsible for the observations of the EHT that were taken with the LMT in April of this year. 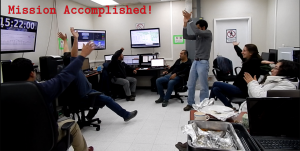 Why should you care about the Event Horizon Telescope?
The New York Times and National Geographic, among others, have written articles about the EHT, so don’t be surprised if one of these days your relatives or friends ask you about the project. Its greatness lies in not only being the first opportunity to observe an unknown event, or proving Einstein’s general relativity at never- imagined scales, but in demonstrating that, in times of discord, a close collaboration among a large number of nations is essential for scientific advancement.

The Event Horizon Telescope is a network of eight millimeter-wave radio observatories located on four continents and representing over 20 nations. These observatories work together as a single Earth-sized telescope using the Very Large Baseline Interferometry (VLBI) technique. One of these facilities is the LMT, a 32-meter single-dish millimeter-wavelength telescope led by the Instituto Nacional de Astrofísica, Óptica y Electrónica (INAOE, Mexico) and the University of Massachusetts Amherst (UMass, U.S.A.). Each night, the LMT synchronized (with a precision higher than 10-12 seconds) with the other telescopes using a hydrogen maser and recorded approximately 30 Terabytes of data which were stored in Mark 6 data systems developed by the Massachusetts Institute of Technology (MIT) Haystack Observatory. 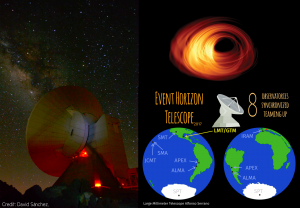 Figure 2 (Left) LMT while observing at Sagittarius A* for the EHT project. Credit: David Sánchez. (Top-Right) Simulated image of an accreting black hole. The event horizon is in the middle of the image, and the shadow can be seen with a rotating accretion disk surrounding it. Credit: Thomas Bronzwaer, Jordy Davelaar, Monika Moscibrodzka, Heino Falcke, Radboud University. (Bottom-Right) The EHT is formed by eight telescopes around the world: the Submillimeter Telescope (SMT), the Submillimeter Array (SMA), the James Clerk Maxwell Telescope (JCMT), the Atacama Pathfinder Experiment (APEX), the Atacama Large Millimeter Array (ALMA), the South Pole Telescope (SPT), the Institut de Radioastronomie Millimétrique 30-m Telescope (IRAM) and the LMT.

The observing run at the LMT
The observing run was set to begin on April 4 with a 10-day window to accomplish five observing sessions. Some of the EHT team members got to the telescope site days before to check on the instruments (a 1.3-mm receiver, the backend system and the hydrogen maser) and get acclimated to the high altitude and time change (since the observations were to be performed at night time). My adventure began on May 31 when I met the EHT-LMT observing team, led by Dr. Gopal Narayanan (UMass researcher and the developer of the 1.3-mm receiver). I was really surprised that the crew consisted mainly of PhD students; Sandy, Aleks, and Michael are in their first years and Katie is a Computer Science PhD candidate. The first thing that came to mind was: how come young students are in charge of such an important task?! I got the answer to my question after spending a few days with them. Not only they are outstandingly capable but also they know how to work as a team.

Since the observing sessions were to be ~17 hours long, the team split into two groups: Group 1 (David, Lindy, Aleks and Michael) began the observing session at 5:30 pm and ended at 2 am, and Group 2 (Edgar,Gopal, Katie and Sandy) started to observe at 1 am and finished at 10 am. This schedule allowed all of the team members to sleep for at least 6 hours, join with the Command Center (and the other observatories) at the 2:30 pm video conference for the go/no-go decision (given the weather conditions at the different sites), and having a one hour overlap in between observing groups’ shifts. 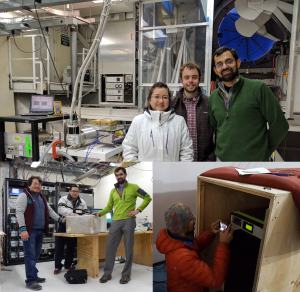 Both groups had an expert telescope operator (Edgar or David), but in one group was the backend system expert (Lindy) while in the other was the receiver expert (Gopal). This made the students a little nervous at first because if any problem arose then they would have had to face it alone before calling the expert (whom would very likely be sleeping at Base Camp).

The first target of the observing run was a binary black hole called OJ 287. This object is scientifically interesting all on its own, but because it is a deeply studied object, it will instead be used to calibrate the observations of the project’s primary observing targets. These are Sagittarius A* (Sgt A*), the supermassive black hole at the center of our galaxy, and the supermassive black hole in M87, the most important object of the first night since Sgt A* observations were planned for the following days.

Along with the observations came the uncomfortable situations that nobody talks about but that every observational astronomer has suffered from: power failure, difficulty to perfectly focus the telescope, and coffee shortage, the last one being the most stressful of them all. The good thing was that the exceptional skills of the telescope staff (including the operators) managed to quickly fix these inconveniences and halfway through the observing run reinforcement arrived: Antonio (a PhD student at IRyA/Université Toulouse III – Paul Sabatier) and Sergio (a postdoc at MPIFRA). Nevertheless, tiredness increased every day, but the 24-hour interactions among the team members helped them feel relaxed, increasing the moments of laughter and jokes. 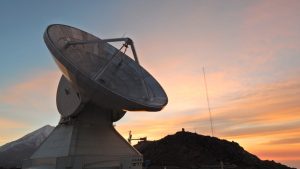 Figure 4 Sunrise at the LMT while observing at Sagittarius A*. Credit: Ana Torres Campos.

In my personal opinion, one of the keys to the EHT success is the excellent communication between the project team members, based not only on frequent videoconferences, emails and chats on Slack, but also a very well organized web or “wiki” where you can find the manuals of the instruments, tutorials on the observing run procedures, and even contact telephone numbers.

What I learned from the EHT-LMT team
1. An observing run will only be successful if the team works efficiently.
2. It is necessary to be capable of occupying different roles on a team.
3. Being assertive when listening and giving instructions will save you time.
4. Relaxing and fun moments will improve the job performance of the team.
Finally, I would like to thank Gopal, Katie, Michael, Sandy, Lindy, Aleks, David, Edgar, Antonio, Michael and Sergio for sharing with me such an incredible experience and to the LMT site and Base Camp crew for the outstanding job they do.