Not all black holes that wander are lost – and now, some may have been found.

How do you make a black hole billions of times the mass of the Sun? Even for the planet-building Magratheans, this seems like a tall order. Plenty of mechanisms have been proposed to explain the formation of these supermassive black holes (SMBHs) found at the centers of most galaxies. Some involve the mergers of “seeds”, massive black holes (MBHs) weighing in at merely hundreds to hundreds of thousands of solar masses. A simple way to test these theories is to search for relic MBHs, and low-mass dwarf galaxies are excellent targets. Since dwarf galaxies haven’t undergone many mergers, any MBHs they harbor should have avoided being gobbled up by growing SMBHs.

Today’s paper studies 13 possible MBH candidates in dwarf galaxies, some of which may have wandered to the edges of their hosts. What’s up with that – and are they really MBHs? Let’s dive in!

Here’s a question. Since SMBHs are usually found near the center of their galaxies, why might we expect some MBHs in dwarf galaxies to lie further out? The answer has to do with gravity: since dwarf galaxies are much less massive, their gravitational potential is lower, making it easier for MBHs to “wander” away from their centers. This means that if you see a radio source that appears far to the side of a dwarf galaxy’s center, it could be an MBH – or it could be an active galactic nucleus (AGN) lying in a galaxy far, far away, accreting matter and sending energetic jets into the cosmos, that by chance simply happens to lie behind the dwarf galaxy. These unwanted interlopers can pose a challenge for identifying MBHs.

Another issue with finding MBHs is that they’re dim. While they go through periods of accretion like normal AGN, their low masses mean that they don’t accrete as quickly, reducing their luminosities. By the early 2000s, only two accreting black holes had been found in dwarf galaxies. Fortunately, this changed with the advent of sky surveys like the now-famous Sloan Digital Sky Survey (SDSS), which has been running since 2000 and has amassed detections of close to 1 billion unique sources. 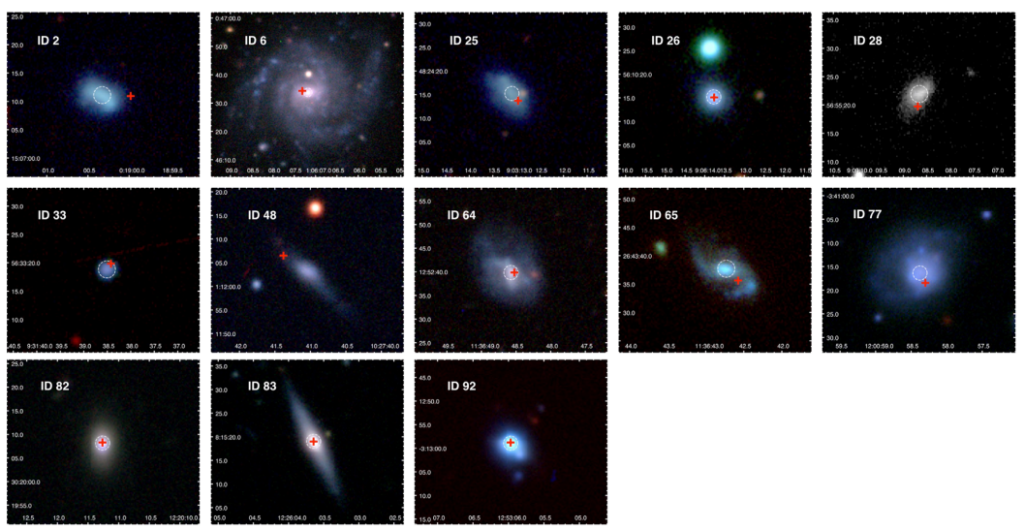 Figure 1: The 13 dwarf galaxies hosting possible MBH candidates, as seen by the Dark Energy Camera Legacy Survey at optical wavelengths. The red crosses show the location of the compact radio sources that may be MBHs. While some appear close to their host’s center, others are significantly farther away. Image credit: Fig. 7, Reines et al. 2020.

The 13 candidates in this paper were assembled by some of the same astronomers in a paper from 2020. They sifted through 43,707 low-mass dwarf galaxies from SDSS, looking for sources that had been detected at radio frequencies by the Very Large Array (VLA). After keeping the matches and eliminating the radio sources that were background AGN or could be explained by star formation-related processes, they ended up with 13 MBH candidates, many of which aren’t aligned with the centers of their host galaxies.

In this more recent paper, they performed follow-up observations using the Very Long Baseline Array (VLBA). The VLBA is an interferometer, using radio telescopes thousands of kilometers apart to reach high angular resolutions, allowing astronomers to see fine details. Unfortunately, the VLBA was only able to detect four of the 13 candidates – and those four, because of their luminosity and position, seemed most likely to just be interlopers, active galactic nuclei in galaxies far beyond the dwarfs they team was targeting. 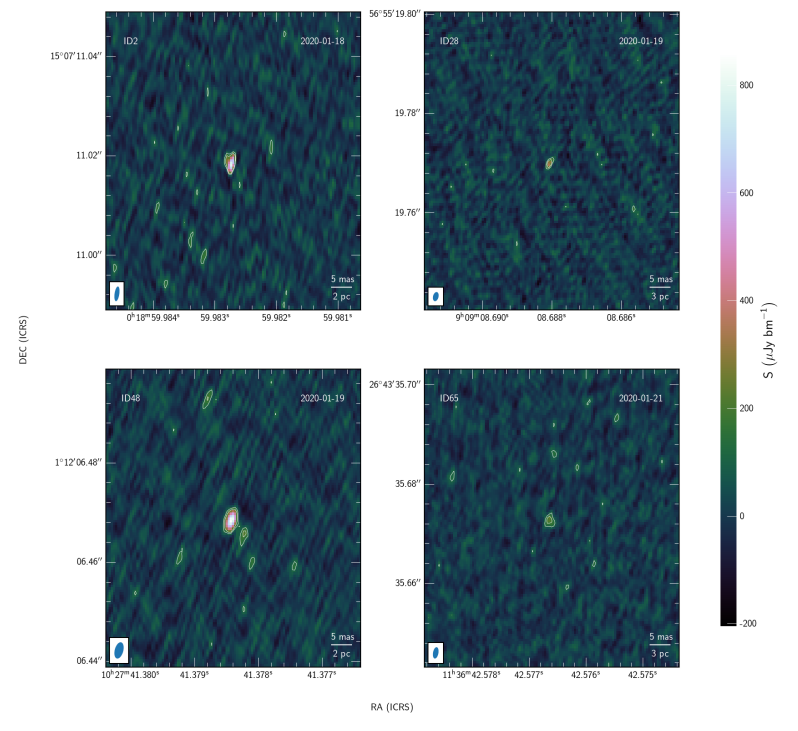 Figure 2: The four sources the team was able to detect with the VLBA. Here, S is flux density, a quantity that describes the intensity of radio emission. As these sources are actually background AGN, rather than MBHs in the targeted dwarf galaxies, the physical scales in the lower right are inaccurate. Image credit: Fig. 1 from the paper.

This might seem like an enormous problem! Only four detections, all of which appear to be imposters? Fortunately, the situation isn’t as dire as it might seem. While the VLBA is good at resolving sources on small scales, in the configuration used, it’s not good at resolving sources on large scales – and the radio emission from accreting black holes might be in part from larger structures like radio lobes, rather than central point sources.

Multiwavelength observations confirmed that two of the remaining nine are likely accreting MBHs near the center of their host galaxies. The other seven remain unknown. Five of those are too bright to be from star formation and, based on their positions, could be either more background AGN interlopers – or, tantalizingly, wandering MBHs.

Where do we go next? Follow-up observations at other wavelengths could be useful. The group suggests the Hubble Space Telescope in particular as a means of figuring out what those seven sources truly are. Given the difficulties involved in detecting MBHs, even one more could prove valuable as astronomers try to understand the formation of the largest black holes in the universe.