Feedback doesn’t just appear on your homework or as the horrible screeching noise in poorly assembled speakers, it also helps shape the evolution of a galaxy. Feedback consists of wind or jet-driven motion of gas and dust within or without a galaxy from many different sources: supernova explosions, radiation from stars or outflows from active galactic nuclei (AGN). Winds driven by these sources blow throughout the galaxy enriching its gas with metals and regulating its star formation. Stellar sources were, until recently, believed to dominate feedback processes in dwarf galaxies, largely because it was thought such low mass galaxies couldn’t host AGN. Over the past decade, however, there have been hundreds of detections of AGN within dwarf galaxies. Motivated by this plethora of detections, today’s authors set out to identify the dominant source of feedback in nearby dwarf galaxies and report some of the first direct detections of AGN-driven outflows.

As a starting point, today’s authors make use of this wealth of detections by focusing on papers that identified AGN in the infrared and optical parts of the spectrum. Outflows from either star formation or an AGN will ionise the surrounding gas and leave distinct patterns in the host galaxy’s spectrum. As a first step in constructing their sample, the authors employed the BPT diagnostic (named after its creators Baldwin, Phillips & Terlevich). It compares the ratio of two optical emission line pairs to determine whether the host galaxy’s spectrum is dominated by AGN processes, star-formation processes or is a composite of both. Using this today’s authors constructed two galaxy samples: those dominated by AGN emission and those dominated by star formation processes. Within each of these samples, the authors prioritised spatially extended galaxies which allowed them to measure the galaxy’s spectrum at various positions along its axis. An illustration of this is shown in figure 1. With these criteria, the authors construct a sample of 29 AGN and 21 star formation dominated galaxies and used the Keck telescope to measure spectra at discrete positions along its axis. Additionally, they took an average spectrum across the full extent of the galaxy.

Figure 1: Illustration of the direction of spectral measurement on a selection of the galaxy sample used in today’s work. The white lines represent the orientation of the spectral slit. Adapted from figure 2 in today’s paper.

Finding the Flow of an Outflow

Emission lines in these spectra were fit using two approaches shown in the top row of figure 2. In the left-hand panel, each peak in the doublet is fit using a single Gaussian whereas the right-hand panel uses a broad (orange distribution) and narrow component (green distribution) to fit each peak. The χ2 value, in the top-left hand corner of each panel, measures the difference between the observed and fit distributions, so the much lower value in the right-hand panel tells us that using two distributions produces the most accurate fit. By fitting two distributions to a peak, the authors can track both the gas bound in the bulk of the galaxy using the narrow component and capture any potential outflows with the broad component. Outflows are generally described as gas moving out of the galaxy, thus at different velocities relative to bound gas in the galaxy. Motion from outflows would appear in the spectrum as Doppler broadening, so any detectable broadening or shift in these components relative to one another would be indicative of a potential outflow, as can be seen in the bottom panel of figure 2. 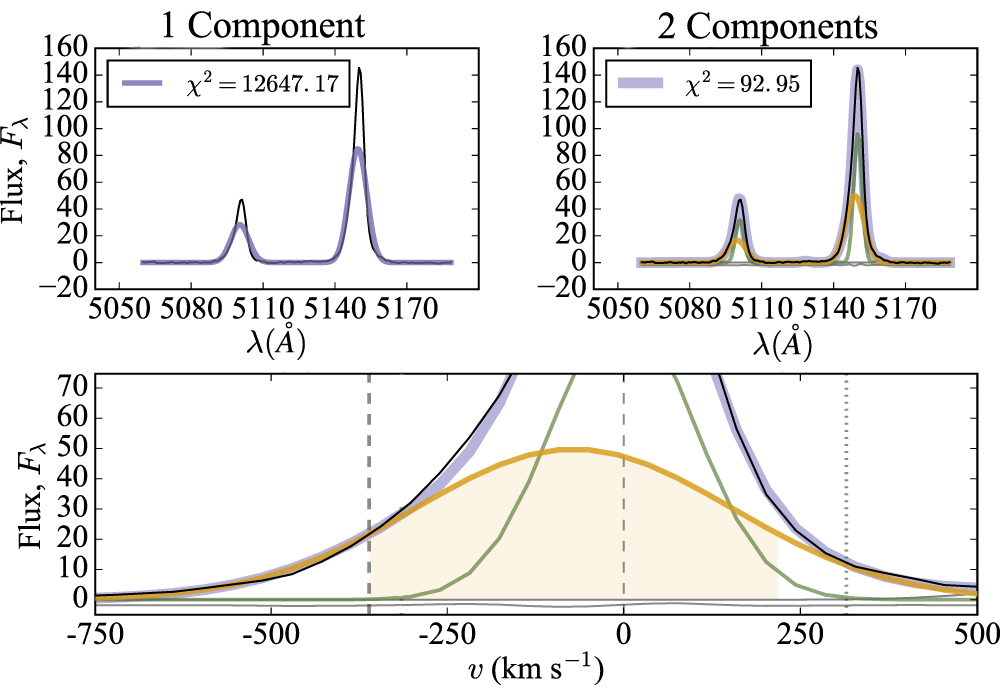 Figure 2: Illustrating the fitting process to the [OIII] doublet. The top panel shows that using two Gaussian distributions to fit each line produces a better fit to the doublet, shown by the reduced χ2 value. The bottom panel highlights the different characteristics of the narrow (green) and broad (orange) distributions. As discussed in the text, fitting two distributions allows the authors to measure the velocity and intensity of the outflow using the broad, orange distribution. The broadening and offset from the narrow distribution suggests we are seeing outflow activity. Adapted from figure 3 in today’s paper.

Of the 50 galaxies in their sample, 15 had detectable broad components indicative of gas moving independently of the galaxy. For these 15 galaxies, the spectral fitting process was repeated using the spectra measured at various points along the extent of each galaxy. 13 of these 15 galaxies had broad components at all radii and thus considered to have outflows. Using the best fit model from the averaged spectra, the BPT classification was determined for both the narrow and broad components, and plotted in figure 3. From this the authors determine the primary source of ionisation for the bound gas (smaller, fainter symbol) and the source of the outflow (larger symbol). The authors find 9 galaxies are dominated by AGN emission, of which 7 have AGN-driven outflows. These are among the first direct detections of AGN-driven outflows in dwarf galaxies. 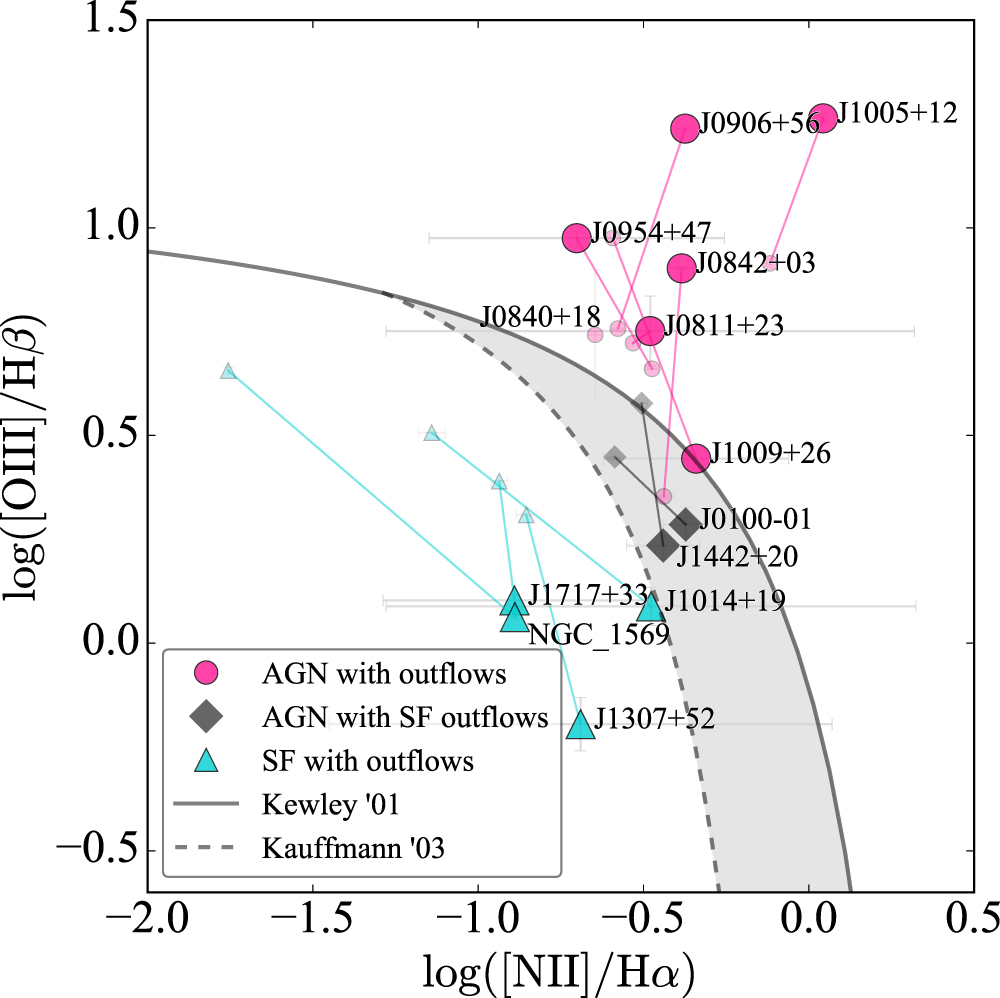 Figure 3: BPT diagnostic characterising the primary source of ionisation in gas bound in the galaxy (small, fainter points) and that driving the outflows (larger, brighter points). The points that fall into the top-right region are galaxies and outflows dominated by AGN, the bottom-left region has galaxies and outflows dominated by star formation and those in-between are a composite of both. This is figure 5 in today’s paper.

The Nature of the Flow

Averaging the broad components for star formation and AGN-driven outflows highlights some crucial differences. Figure 4 shows that AGN outflows are, on average, blueshifted compared to the narrow component. Since AGN generally lie in the denser centre of a galaxy, any material moving away from the observer, and hence redshifted, would be obscured, leaving a net blueshift. AGN-driven outflows also carry a greater proportion of the flux relative to star formation driven outflows. This suggests that AGN-driven winds could remove larger amounts of gas from the galaxy than those driven by star formation. Thus, AGN are likely to play a significant feedback role in dwarf galaxies. 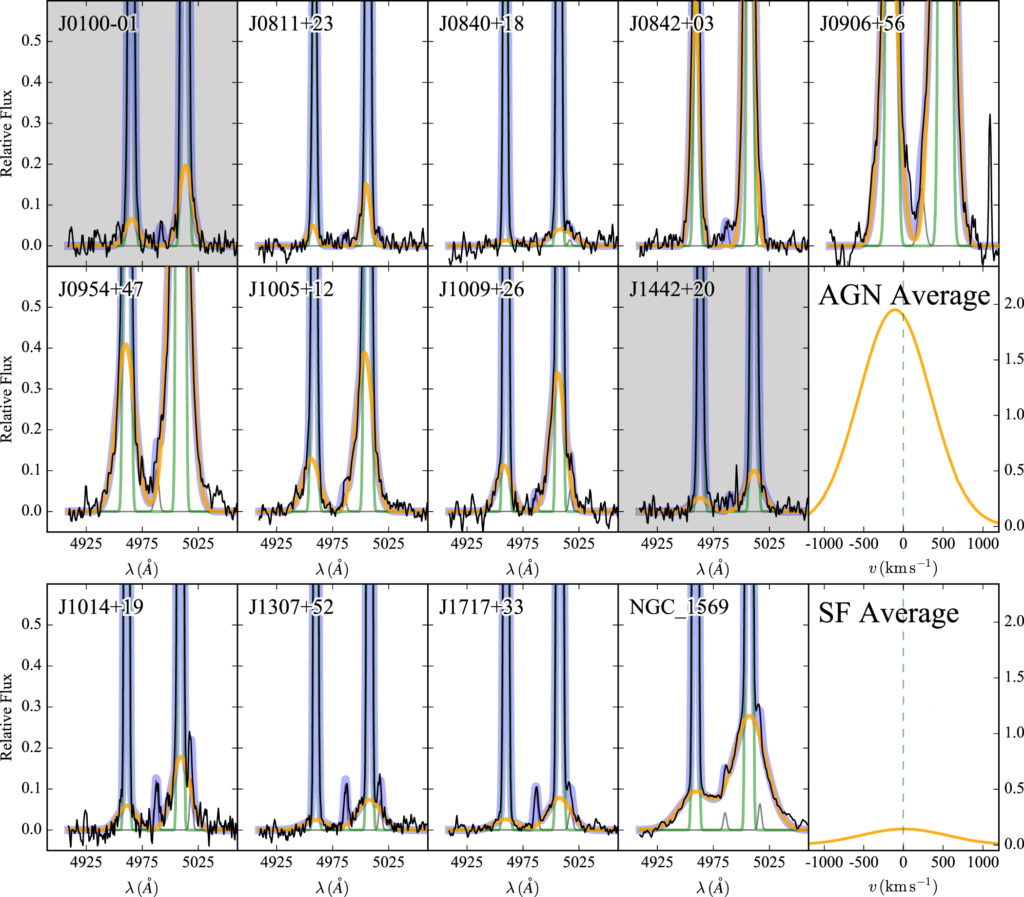 Figure 4: Results of the fitting for the BPT-classified AGN-driven (above) and star formation driven outflows (below). Averaging the broad components shows clear differences between the nature of these flows. Greyed out panels were not included in the ‘AGN average’ panel as these are the galaxies believed to host AGN but shows signs of star formation driven outflows. Adapted from figure 6 in today’s paper.

Today’s authors have utilised the plethora of new AGN found in dwarf galaxies to make the first direct detections and measurements of AGN-driven outflows in these low mass hosts. Despite their small sample, the authors have established a set of vital constraints that will help inform future galaxy feedback simulations. Alongside an ever-increasing number of AGN detections, this work highlights the significance of AGN in the evolution of dwarf galaxies.