Supermassive black holes (SMBHs) are a quiet bunch. Most of their time is spent sitting silently at the centre of their host galaxy as it rotates around them. However they are known to come out of their shell occasionally. During the host galaxy’s life, gas and dust can find its way into the centre and be devoured by the SMBH. As with any greedy diner, indigestion can strike and, for an SMBH, it’s explosive. Radiation from across the electromagnetic spectrum belches from the SMBH as it transitions, temporarily, into an active galactic nucleus (AGN). Today’s paper seeks to understand whether galaxy mergers could drive gas into the centre and trigger this transition from SMBH to AGN.

To investigate this phenomenon, today’s authors use spectroscopic data from the SDSS DR7 & GAMA surveys. Combining these surveys allows them to construct a comprehensive galaxy sample: the SDSS provides a huge number of galaxies within the nearby universe and GAMA contains data for the more distant universe, spanning a much greater range of redshifts. To search for mergers, the authors need to classify the shapes of all these galaxies, but this sample is too large to do this all by eye. Instead they make use of a novel convolutional neural network (a type of machine learning algorithm) to perform this task. The network was trained on images of merging galaxies identified in Galaxy Zoo, which were then used to classify mergers in the SDSS and GAMA samples. Two sets of data were collected from the algorithm with a 1) looser and 2) stricter definition of a merger considered. Next, to classify AGN, the authors used the optical BPT diagram, however this technique is known to miss obscured AGN, so a Mid-IR (MIR) colour check was also applied to the data.

Investigating the effect of mergers

First the authors tried to determine whether mergers could trigger AGN by comparing the fractions of AGN found in merging and non-merging galaxies. However, to do this they had to carefully construct a control sample of non-merging galaxies. An AGN found within a merger was only included in this experiment if at least 10 non-merging AGN hosted in galaxies of similar mass and redshift could be identified. Figure 1 shows the results of this experiment. Whether identified with optical or MIR techniques, merging galaxies show an excess of AGN, up to about 1.5 times greater than non-merging galaxies. Such an excess of AGN in mergers suggests the act of merging does help transfer gas into the central black hole, rather than simply being a coincidence that these properties align.

Figure 1: Summarising the results of the first experiment, with the larger percentages highlighted, showing mergers make up a significant proportion of the AGN population. Adapted from table 2 in today’s paper.

Mergers are a fact of life for evolving galaxies. The most massive galaxies in the universe are believed to grow through the merging of smaller ones. Thus, the authors were also interested in seeing whether the AGN population is higher for merging galaxies than non-merging ones. The AGN and the corresponding control sample were constructed using the same criteria as before. However, this time the control sample consisted of galaxies without AGN. Figure 2 shows the results of this analysis for the optically selected GAMA AGN as a function of host galaxy mass, redshift and strictness of merger definition (top and bottom rows). As expected, we see an increase in merger fraction with host galaxy mass across all redshifts. However, a clear excess of AGN is visible in the most massive galaxies (i.e those with greater stellar mass), regardless of the strictness of merger definition. Thus, these higher mass galaxies are the most important environments for triggering AGN through mergers. 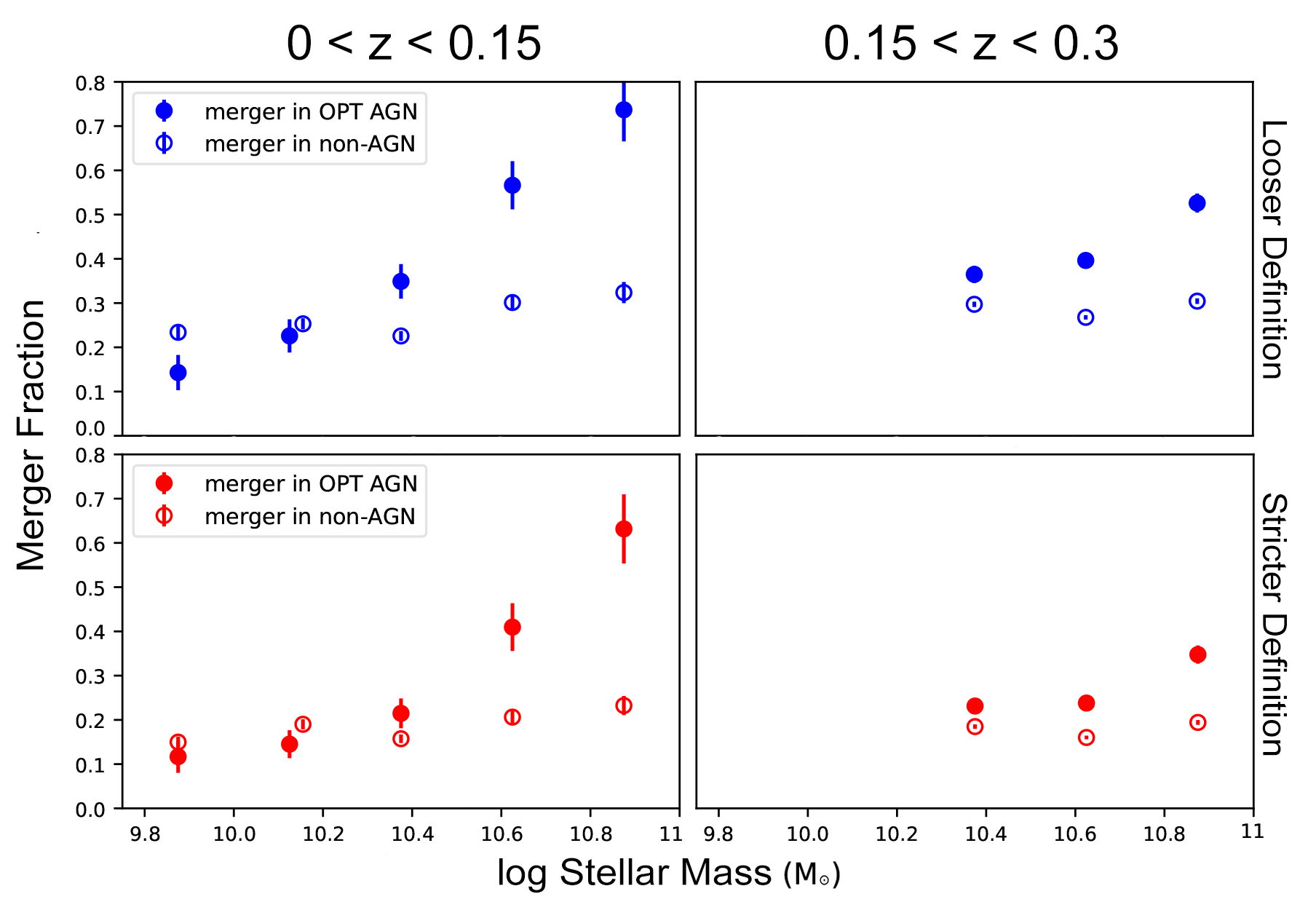 Figure 2: Investigating the merger fraction as a function of stellar mass, redshift and strictness of merger definition for optically selected GAMA AGN. Adapted from figure 9 in today’s paper.

How the results shape up

With these results, the authors suggest that mergers between galaxies do play a role in triggering an AGN.  However, this field is highly controversial. Not least because merging galaxies are tricky to define. They can approach and orbit each other several times before beginning physical interaction. All the while, material could be exchanged and trigger AGN activity. Unlike today’s work, which uses machine learning, a significant number of AGN-merger studies are based on visual classification, which is often biased towards more obvious mergers so the results can be difficult to directly compare. In some cases, this approach produces a much larger AGN excess than calculated here. In others, the opposite is true: I recently wrote a bite of an AGN-merger study using a small sample of visually classified quasars which found no excess of major mergers. It is evident that how you define your merger sample can affect the results and makes this question very difficult to definitively answer. Even the algorithm used in today’s work is only 91.5% accurate which when applied to the huge numbers of galaxies in this study could lead to numerous false classifications.

Despite the difficulties faced by the field, today’s work sets out an interesting new approach to classifying mergers and studying their effects on the galaxies and SMBHs involved. Whether the results turn out to be accurate is not as important as outlining a method by which a plethora of pictures can be processed, and the results interrogated. If work is done to improve the algorithm accuracy then this approach could prove instrumental in helping disentangle the effects merging has on AGN.