In this series of posts, we sit down with a few of the plenary speakers of the 240th AAS meeting to learn more about them and their research. You can see a full schedule of their talks here, and read our other interviews here! 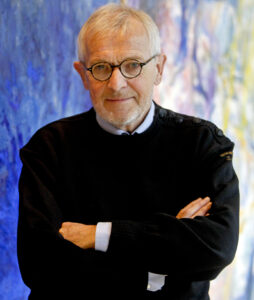 Dr. Francis Halzen is many things: he is the Hilldale and Gregory Breit Distinguished Professor at the University of Wisconsin-Madison, the Principal Investigator of the IceCube Neutrino Observatory at the South Pole, and the winner of the American Astronomical Society’s 2021 Bruno Rossi Prize “for the discovery of a high-energy neutrino flux of astrophysical origin,” an honor which he shares with the international group of scientists making up the IceCube collaboration.

With such a sparkling CV, one might be forgiven for focusing just on his many achievements. Equally interesting, however, are all the things he is not.

“You have to understand that I’m not an astronomer—although I kind of pretend to be one” was one of the first things Professor Halzen said to me. Halzen instead describes himself as a particle physicist specializing in neutrinos. Neutrinos are some of the most abundant particles in the Universe, similar to electrons but with much smaller masses. Neutrinos are particularly interesting since their (lack of) mass is in slight tension with the Standard Model of particle physics, hinting at new and interesting physics.

Despite not being an astronomer, Halzen has been thinking about neutrino astronomy since at least the mid-80s, when he and then-postdoc Dr. Enrique Zas went through all the possibilities on how to build a neutrino detector. “This is a particle physics problem, right—you don’t build a telescope, you build a neutrino detector. And we went through all the possibilities and, actually, at the end of this, we decided that this is what we wanted to do. This, meaning what’s now IceCube.” This is how Halzen got interested in cosmic physics, astronomical sources of neutrinos, and subsequently, multi-messenger astronomy.

Although he ended his undergraduate career as a math and physics student, a natural segue to theoretical physics, Halzen started off as something else. “In fact, my first semester was engineering. Because my father had a construction company and that’s what I was heading for,” he said, before noting with a smile that he actually always knew it wasn’t for him. And yet, he eventually had to get involved in the construction of IceCube and its predecessor, AMANDA, from about 1996 until 2011. So, in the end, he did end up being tangled in his father’s field, completing a full circle.

What is the key to engineering a neutrino detector? Submerging photomultiplier tubes in water. Occasionally, a neutrino will interact with a water molecule, producing light. Though there is a shower of neutrinos running through the Earth at all times, they interact so weakly that this interaction is still rare and results in very little radiation. Photomultiplier tubes are devices capable of detecting such radiation—a few photons at a time! They are easy and cheap to produce, leaving only the technical issue of how to submerge them. Prior experiments were attempted in ocean waters, but fighting the water proved too logistically difficult. Then, at a conference in Poland, Halzen talked about a different approach—and was surprised not to be laughed out of the room. “The original idea actually was that it would be easier to put photomultipliers kilometers deep in ice than to put them in water, in ocean water—this is counter-intuitive, but it turned out to be right. And the big thing about IceCube is that once you figure out how to do it, [it] was relatively easy to build, and once you build it, it’s totally stable.”

“I’ve never done an experiment in my life, I’m still a theoretician,” continued Halzen, the Principal Investigator (PI) of the IceCube experiment. “I always thought it was a bad idea to have a theorist as a PI. But the experiment actually started with three people, and the two others were Berkeley graduate students. And, by then, I was like in my 40s I knew how to write a proposal and they didn’t, and so I wrote the proposal and this, kind of, nobody ever took over.”

Despite Halzen’s misgivings, IceCube and its predecessors have been fantastically successful, currently making up a collaboration of over 300 people in 14 countries. This, Halzen notes, is the real key to success: “the reason it went well is because, just like in science, I’ve always found fantastic collaborators. When we set up the project in Madison we found all the right people. You know, this was an incredible, talented group of people who designed the hot water drill and then actually made it work. We found the right people and fantastic project directors and engineers, so that was also partly luck but partly I worked at it, cause I knew I wasn’t going to do it.” So, one more thing that Halzen is not: lacking amazing collaborators.

Advice for [Not] Astrophysicists

When asked whether he had advice for budding astrophysicists at the start of their careers, Halzen came prepared. “Yeah, and my advice is always the same. I think […] that the most important thing is that you do things you are interested in: don’t follow money, don’t follow personalities, follow your own interests.” He elaborated that the first two may be a way to build a career, but won’t serve to build a happy life. He also recalled reading that around 90% of physicists spend their life working only on the topic of their thesis, a number that baffled him. “How can you do that? There must be other interesting things that come up in a lifetime, right? So that’s the other advice: don’t hesitate to switch topics. In your field, or even outside.”

To hear more about how IceCube hunts for astrophysical neutrinos, tune into Prof. Halzen’s prize lecture at 8:10 AM PT on Wednesday, June 15 at #AAS240!