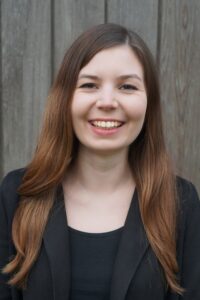 This guest post was written by Fabienne Nail: “I am a first year PhD student at the University of Amsterdam, intrigued by exoplanetary atmospheres and the idea of finding aliens. In my research, I simulate the interactions between planetary and stellar winds and their observational signatures. I have recently taken up pole dancing, a sport that is very challenging and unfortunately has bad biases. I encourage my readers, regardless of gender, to take a trial class. It’s fun!”

How cool would it be to find aliens? Maybe they exist, and maybe there are already countless interstellar graffiti with the meaning “I was here,” but we, the human species, are unable to see them. Indeed, it seems that we are well on our way to finding signs of extraterrestrial life: we are getting better at understanding the atmospheres of exoplanets, a key in the search for extraterrestrial life. There is just one thing that astronomers tend to steer clear of… magnetic fields.

Magnetic fields make things just super complicated. However, their impact on the evolution and habitability of a planet is enormous. For example, consider atmospheric loss. Did you know that the Earth’s atmosphere is losing about 3kg of hydrogen per second? It is important to understand how quickly the atmosphere is depleted in an exoplanet to get a time scale on which the emergence of life would be possible. Or could you imagine living on a planet without an atmosphere?

So far, the focus in exoplanet research has been on hydrodynamic escape. Planets absorb the radiation of the central star high in their atmospheres.. The atmospheric gas heats up, expands, and escapes the planet’s gravity. But reality is much more complicated! For example, what about highly energetic particles from the host star’s stellar wind that hit the upper atmosphere of the planet? The work presented here takes a step in the right direction towards unraveling the effects of stellar winds on atmospheric loss.

The authors model the outflow of a hypothetical planet that is orbiting a star which is less massive than the sun (only 8% of the solar mass). The atmosphere of this planet is considered to be hydrogen-rich, as they aim to mimic the planet’s teenage years. As a prototype, the researchers decided to take the properties of TRAPPIST- 1. This system is promising to find extraterrestrial life, as it contains 3 planets that are orbiting in the star’s habitable zone. The hypothetical planet has the properties of TRAPPIST-1e, so its size is close to the Earth. The stellar wind is nothing else than ionized particles (plasma) moving along a magnetic field. To simulate the interaction of this particle storm and the planet’s atmosphere, the authors include the magnetic and plasma environment along the orbit of the planet based on prior predictions of the TRAPPIST-1 system. 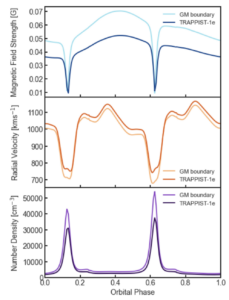 Figure 1: Stellar wind conditions to which the planet is exposed during its orbit, derived from simulations of the host star TRAPPIST-1. The boundary of the global magnetosphere (GM) is representative of the planet’s environment. The strong variations in magnetic field strengths (top) and their influence on the velocity of the plasma (middle) and its density (bottom) are clearly visible.

The variations of this environment along one orbit can be extreme – like a ride on a roller coaster (see Figure 1)! A reduction in the magnetic field strength slows down and compresses the local plasma. In addition, the geometry of the magnetic field changes along the orbit, which means that the plasma is pulled in different directions. Based on the properties of the plasma environment, the authors choose 4 characteristic points and model the outflow of the planet’s atmosphere using a 3D magnetohydrodynamics code. This kind of code can simulate the behavior of plasma under magnetic forces.

Stellar winds blow away gas from the planet’s atmosphere, and a tail is formed around the planet, like that of a comet. The shape of this tail is determined by the strength and geometry of the magnetic field in the planet’s environment. You might be wondering if it is possible to observe the tail? And can we see the impact of the stellar wind?

The authors try to find an answer to these questions and mimic transit observations of the Lyman-alpha line. This line is often used to trace atmospheric escape, as it has its origin from a neutral hydrogen transition and hydrogen is quite abundant in the planetary wind. When the planet is transiting the star, a part of the stellar light is absorbed by hydrogen atoms in the planet’s atmosphere. This absorption takes place at the characteristic Lyman-alpha wavelength of 1215.67 Angstrom. If you are observing the transiting system, you can compare the depth of this absorption line in your spectra before, during, and after the transit. The comparison allows conclusions about the amount and velocity of hydrogen in the planet’s atmosphere at different orbital positions. You see, this tool is pretty useful to characterize the planet’s tail. 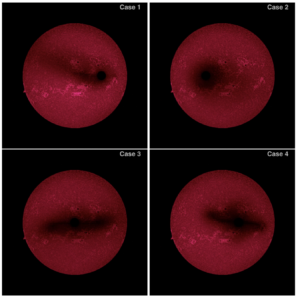 Figure 2: Illustration of the evaporating planet passing the stellar disk from left to right. The stellar disk is represented by a Solar Dynamics observation in the 1600 Angstrom band. The different cases show the shape of the planetary tail for different orbital positions, i.e., different stellar wind conditions.

Stellar Wind Conditions – The Engines of the Roller Coaster

As can be seen in Figure 2, the simulations show that for random orbital phases, the tail of the planet can have completely different shapes. Sometimes the outflow is narrower around the planet (case 2), and sometimes it looks more like long hair blown away by the wind while riding a super-fast roller coaster (case 1). The authors found that the variations occur in periods of a few hours. Moreover, the stellar wind changes over a few orbital periods from our perspective. This makes it super difficult to make good predictions for observers. It is generally difficult to interpret the spectra correctly if you have no idea what to expect.

How does this affect a transit observation?

The observation of the Lyman-alpha absorption line during a transit of such a planet would show highly temporal variations. We should be careful in its interpretation, especially when we stack several observations of different time stamps. However, the shape and position of the Lyman-alpha absorption line profile allows us to draw conclusions about the outflow’s characteristics.

How does this affect the evolution of the planet?

If the planet is hosted by a magnetically active star, atmospheric outflow could be accelerated, leading to faster atmospheric depletion. These planets are probably not a good place to find life.