Frank Drake’s Equation & Legacy in the Search for Extraterrestrial Intelligence

In remembrance of Frank Drake (May 28, 1930-September 2, 2022), today’s classic paper summary covers his eponymous equation, as it originally appeared in a chapter of the 1965 book “Current Aspects of Exobiology.” Drake’s chapter explores the chances of success in the Search for Extraterrestrial Intelligence (SETI) from two angles: how common communicative civilizations are in the Galaxy and which search techniques are most likely to succeed.

“Contact with another sapient species will have the most profound impact on terrestrial science and philosophy.” – Frank Drake

The Drake Equation is an effort to estimate the number of communicative civilizations in the Galaxy, defining such a civilization as one “of intelligent beings having and applying a technology sufficiently advanced to permit detection of the civilization over interstellar distances.” The equation is as follows:

where the variables are defined as:

= the rate of star formation in the Milky Way,

= the fraction of these stars which host planets,

= the average number of habitable planets in each of these systems,

= the fraction of these planets that develop life,

= the fraction of these planets where intelligent life evolves,

= the fraction of these planets that become communicative, and

= the average lifetime of a communicative civilization.

Drake initially presented this equation as a discussion starter at the Space Science Board-National Academy of Sciences Conference on Extraterrestrial Intelligent Life, held at Green Bank, West Virginia, in 1961. 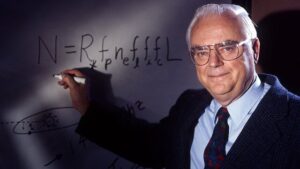 Frank Drake posed in front of a white board with his eponymous equation. (Source: SETI Institute)

At the time, only the star formation rate (

) parameter had an observational estimate (on the order of 1 star per year), and the rest were primarily up to speculation. Planet formation theory suggested that

(the planet occurrence fraction) may be roughly ½, but no exoplanets had yet been detected. Based on the Solar System, Drake estimated that

(average number of habitable planets per planetary system) may be roughly 2-3.

(the life development factor) is almost 1. Citing the power of evolution, Drake estimates

(the intelligence evolution factor) as also nearly 1. Though some speculated that

(the communicative civilization factor) would also be 1, Drake notes recent studies of dolphin intelligence. This brings up the concern that intelligent life may not always develop communicative technology; however, it also reminds us that multiple intelligent species may evolve on the same planet. So, Drake settles again on roughly 1 for the variable. These estimates bring the equation to:

This leaves the most difficult variable to estimate:

, the lifetime of a civilization. Without knowing humanity’s longevity, there are zero data points for this estimate, besides a lower limit. After discussing the complications involved, Drake explores the results for a “conservative” estimate of 1,000-10,000 years. This suggests that the mean distance between communicative civilizations in the Galaxy would be on the order of 1,000 lightyears. Drake concludes the section with a discussion of what he considered, at the time, the most uncertain variables in the equation (

) and what future study may help constrain them, including the detection of exoplanets (which has since happened!) and searching for life on Mars (no detections yet, but the search isn’t over).

Much of the rest of the chapter focuses on the feasibility of a variety of communication techniques. Drake describes three main categories: rocketry, nuclear particle radiation, and electromagnetic radiation.

Drake describes the discouraging results of studies on the physics of interstellar rockets. The main issue is the vast distances between star systems, and even vaster distances between the estimated frequency of communicative civilizations. He concludes that interstellar rocketry may be possible with incredible fuel quantities and perhaps with technology more advanced than our own, but based on the resources required, it is expected to be relatively rare. He follows a similar economically-based argument to conclude that electromagnetic radiation should be favored over a more resource-intensive particle radiation method.

While electromagnetic radiation seems to be the most feasible method of interstellar communication, this is still a very broad range of possibilities. For a continuous narrow-band signal, Drake focuses on natural limitations, rather than those of human technology, to find the wavelength that best balances many factors in determining sensitivity. Ultimately, he found that several centimeters (3.2-8.1 cm depending on sky location) would provide the best balance between the all-sky radio background, and physical limitations for transmitter size and tolerance.

Alternatively, Drake describes Barney Oliver’s argument that short pulses of broadband emission may also be effective. Bandwidth and minimum pulse width are inversely proportional, but cancel out their effects on radio sensitivity for equipment at the time. So, there isn’t a sensitivity motivation to choose between narrowband continuous wave and broadband short-pulse transmissions, or any middle ground between them. However, Oliver himself raised 2 criticisms of this idea: electrons in the interstellar medium smearing the pulse over time and limits on instantaneous transmitter power for very short, powerful pulses.

Next, Drake explores the use of naturally significant frequencies as an optimal communication frequency. Specifically, the 21-centimeter hydrogen line (and its harmonics), the most striking natural radio line, which should be universally recognizable. This was proposed by Giuseppe Cocconi and Philip Morrison in the first formal SETI publication, as well as in Drake’s Project Ozma which began 6 months earlier but was published later. Project Ozma used the 85-ft Tatel telescope at Green Bank to search for 21-cm transmissions from 2 nearby Sun-like stars, Tau Ceti and Epsilon Eridani. 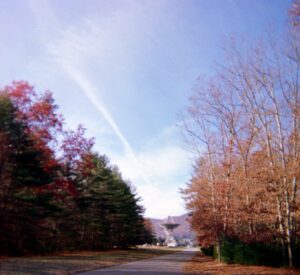 In the final section of the EM transmission discussion, Drake points out that we humans don’t intentionally send out any messages of this sort. Perhaps we should not assume that others would. This means that the most effective approach to SETI may be to look for emission created by normal life activity on the planet, rather than intentional interstellar messages. (Since this time, humans have sent a few such messages but not many.) This argument also indicates that human technology may be detectable, even without the use of intentional messaging.

In the last section of the paper, Drake describes a couple of other search methods that he considers much less plausible: the use of “stellar markers” to create artificial spectral lines and the search for direct contact on Earth, which could only be proven by a physical artifact.

Drake’s Legacy as a SETI Visionary

Ultimately, Drake’s conclusion on the SETI effort is an optimistic one: “We now have the technology to detect reasonable signals over the distances we feel separate communicative civilizations.” He describes the technology required to effectively search the full radio window, noting that it is quite a large undertaking and the people-power of the field is quite limited. In a sentiment shared by Freeman Dyson, who called it the “First Law of SETI,” Drake concluded with the following paragraph:

“Our experience with Project Ozma showed that the constant acquisition of nothing but negative results can be discouraging. A scientist must have some flow of positive results, or his interest flags. Thus, any project aimed at the detection of intelligent extraterrestrial life should simultaneously conduct more conventional research. Perhaps time should be divided about equally between conventional research and the intelligent signal search. From our experience, this is the arrangement most likely to produce the quickest success.”

Frank Drake’s legacy as the creator of the first ever SETI search, one who refined ideas and methods in the field for decades, and one with great hope for humanity’s search for our celestial neighbors will not soon be forgotten in the astronomical community. As the designer of the Arecibo message and co-designer of the Pioneer plaques and Voyager Golden Records, his legacy lives on, traveling though the Galaxy in search of another planet’s astronomers.

Astronomers continue to use the Drake Equation framework in the search for extraterrestrial life, and science journalist Nadia Drake (Frank’s daughter) wrote a great article about this legacy just last year. The discovery of thousands of exoplanets in the past two decades have revolutionized our understanding of the

factors. Perhaps JWST or other missions in development will soon finally detect an exoplanet with signs of life or technology, leading to a better understanding of

Looking for Alien “Lighthouses” in the Stars