Io 2: Searching for exomoons with a radio telescope

Status: Accepted to the Astronomical Journal, available on arXiv

If you have clear skies in your part of the world this weekend, take a look at the Moon. It’s only a few nights away from being full, and even with the naked eye, you should be able to see craters, maria, and other intricate surface details. With its ubiquity in literature, art, mythology, and cultures around the world, maybe we take it for granted that we can easily see the only moon orbiting the planet we call home.

Look elsewhere in the universe and you won’t be so lucky.

Since the time of Galileo, humans have mapped out the moons of the other planets in the Solar System. One major modern challenge, however, has been finding moons around exoplanets – dubbed “exomoons” – orbiting stars far from the Sun. Numerous techniques have been proposed and tested over the last couple of decades, with no confirmed exomoon detections. Today’s paper implements one particularly exotic idea: looking for radio signals from evaporating exomoons.

Io is easily the most violent moon of Jupiter. Tidal friction heats its core, powering volcanoes that pump out massive amounts of sodium dioxide. This gas is ionized by sunlight and then shaped into a torus of plasma by Jupiter’s magnetic field. As the moon moves, it creates waves of plasma, which in turn create an electric field. This electric field accelerates some of the free electrons caught along Jupiter’s magnetic field lines, which then emit radio waves. The emission process is called the electron cyclotron maser instability mechanism, or ECMI for short. 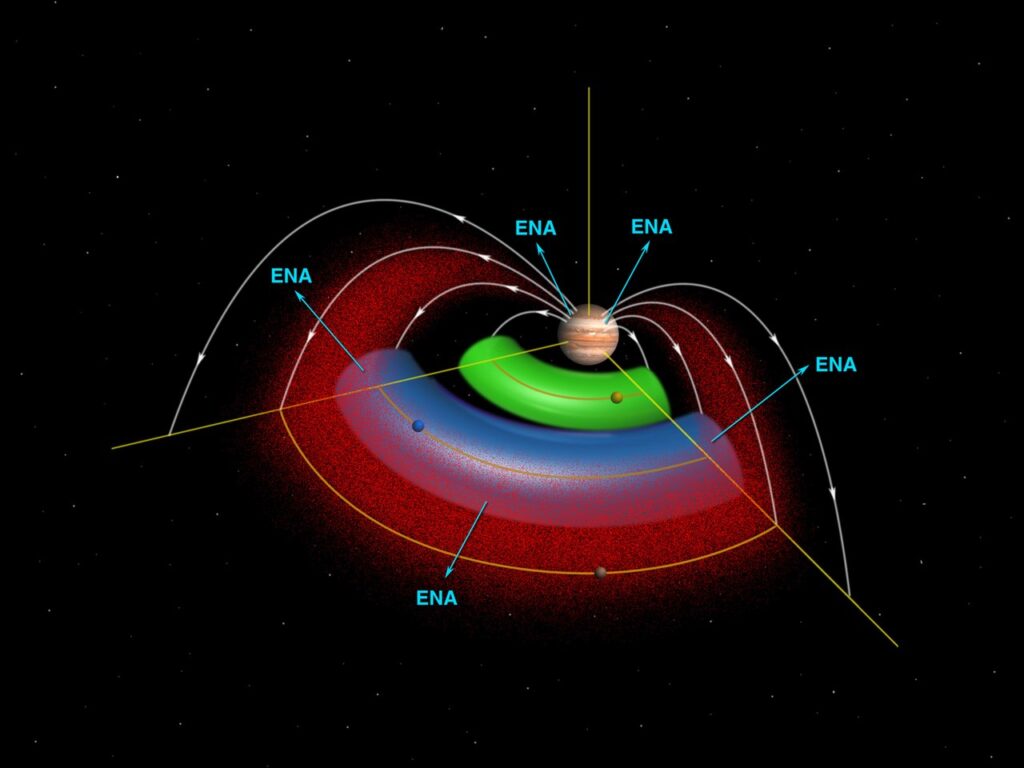 Figure 1: A diagram of the plasma toruses formed by Io (green) and Europa (blue) along with ions trapped in Jupiter’s magnetic field (red) from both moons. Europa’s plasma torus is less well understood, but the ejecta that forms it is thought to be produced through different interactions high in its atmosphere. Energy neutral atoms, or ENAs, can leave the system because they lack a net electric charge. Image credit: NASA/JPL/Johns Hopkins University Applied Physics Laboratory, public domain.

As has been proposed before, the same process could happen with analogous exomoons. A key signature of these hypothetical exo-Ios, as they’re called, would be signs of alkali metals, like sodium, in the atmospheres of their host exoplanets. In fact, astronomers have already found several exoplanets with alkali metals in their atmospheres: WASP-49b, HAT-P-12b, and HD 189733b. Today’s paper describes a search of radio emission from those systems created by ECMI from evaporating exo-Ios.

The authors used the Giant Metrewave Radio Telescope (GMRT) located north of Pune, India. They performed observations of WASP-49b at four different phases in its orbit, in case the host star itself affected the emission. They also retrieved archival GMRT data from observations of the other two exoplanets and searched the entire dataset for signs of ECMI. 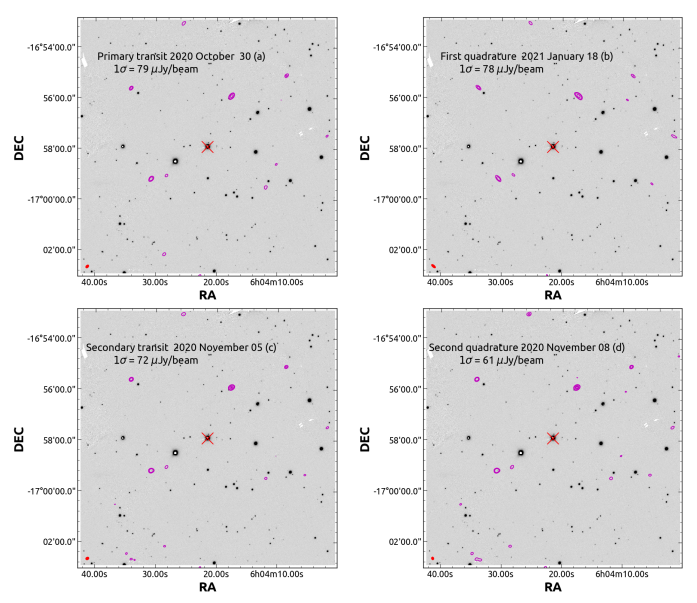 Figure 2: Composite images from the four nights of GMRT observations (purple) of WASP-49b laid over optical data from the Pan-STARRS program. The red crosses mark the location of the system; while there’s optical light from the host star, no radio emission is detected at that spot. Image credit: Figure 1 from the paper.

Unfortunately, the search came up short – no radio emission was detected. Fortunately, this doesn’t mean there aren’t exo-Ios in those three systems. The astronomers postulated several possible reasons for non-detections. The simplest is that the emission could simply be too weak for the GMRT to detect from Earth; after all, these three systems aren’t exactly our nextdoor neighbors. It’s also possible that the magnetic fields of the host planets are weak, which would lead to the ECMI emission occurring at lower frequencies beyond those probed by these GMRT observations. Finally, the emission could be variable or beamed in a specific direction not facing Earth, both of which are true of the radio waves produced by Io.

Where do astronomers go from here? Well, to increase the chances of a detection, the team advocates for performing low-frequency observations with specialized low-frequency telescopes like the Low-Frequency Array (LOFAR), or simply the GMRT itself at a lower frequency band. As more exoplanets are discovered and more spectroscopic studies are performed, other systems will be found that could host exo-Ios. Confirming exomoon candidates will never be as easy as simply walking outside on a clear night and looking up – but I think astronomers will be satisfied by finding them at all.