Status: Submitted to The Astrophysical Journal, available on arXiv

We live in the Local Group of galaxies, a fairly small group of galaxies, held nearby to one another by their gravitational pull. Three major galaxies make up the Local Group – Andromeda, Triangulum, and our home, the Milky Way – but there’s much more to our neighbourhood than just these three. In fact, dozens of smaller galaxies are scattered in between these, many of which are satellites of either Andromeda or the Milky Way, the two largest members of our group.

The total number of satellites orbiting around the Milky Way is not currently known. The two most massive, the Large and Small Magellanic Clouds, are visible to the naked eye, and have been known ever since humans started studying the night sky. However, this number has grown rapidly in the last 100 years, during which about 60 Milky Way satellites have been discovered. In fact, 80% of these have been found since the year 2000, thanks to huge surveys like the Sloan Digital Sky Survey (SDSS) and the Dark Energy Survey (DES), which can detect incredibly small, faint galaxies that were previously hidden from view (see Figure 1, below). 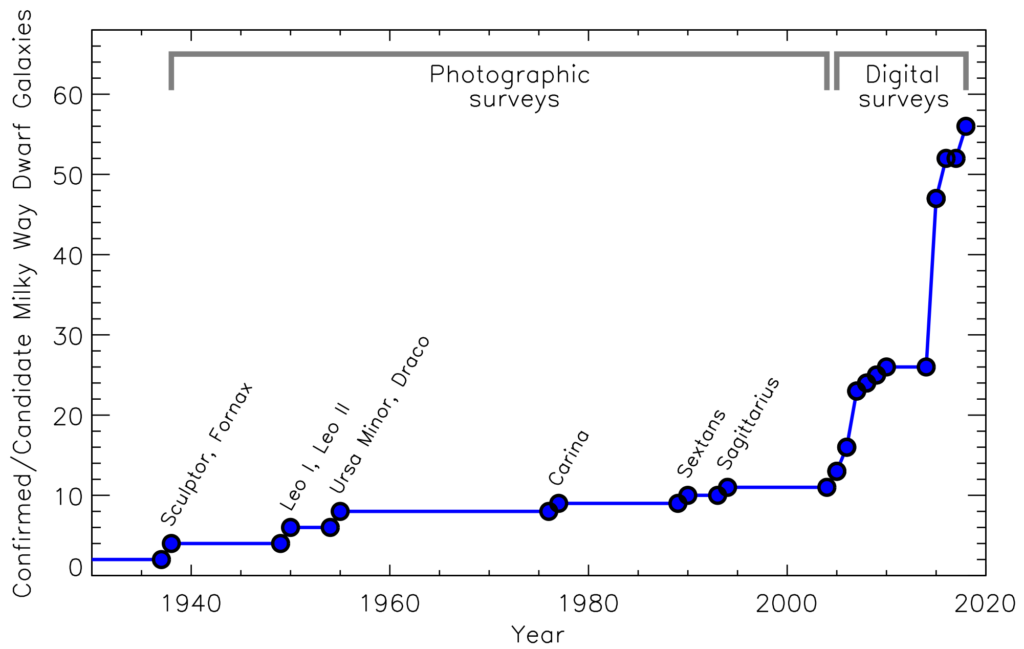 Figure 1: Plot showing the number of confirmed satellite galaxies of the Milky Way over time. Before the 1930s, only two were known (the Magellanic Clouds). This number grew incrementally until the mid-2000s; since then, SDSS and other digital surveys allowed the total number to skyrocket. Credit: Fig. 1 from Simon et al., (2019).

The new kids on the block

The six satellites were first found as “overdensities” in the DECam Local Volume Exploration (DELVE) survey, which are essentially areas of the sky with more stars than would be expected if the stars were scattered randomly. The DELVE survey is specially designed to search for ultra-faint galaxies, but finding out more about these objects requires more detailed data. For this paper the authors observed them a second time: two of them with a longer exposure on DECam, and the other four using GMOS-N, part of the Gemini Observatory.

They found that all six of these structures had a lot in common. Each is made up of old, metal-poor stars, indicating that they all formed at least ten billion years ago. They are all located between 40-100 kpc (130-330 thousand light years) from the Sun, roughly the same distance as the Magellanic Clouds. However, they are also very small, ranging from 10 to 50 pc in diameter, making them less than a hundredth of the width of the Large Magellanic Cloud.

Three of these are confirmed to be dwarf galaxies, which have intrinsic brightnesses far lower than galaxies like the Milky Way and Andromeda. However, the authors actually conclude that the other three objects are so small they don’t even fit the definition of dwarf galaxies! Instead, they class them as star clusters – these are smaller, lower luminosity, and more spherical than dwarf galaxies, and are thought to be leftover pieces of galaxies that previously approached and collided with the Milky Way. Figure 2, below, shows the size and brightness of these new discoveries, compared to previously discovered dwarf galaxies and star clusters. 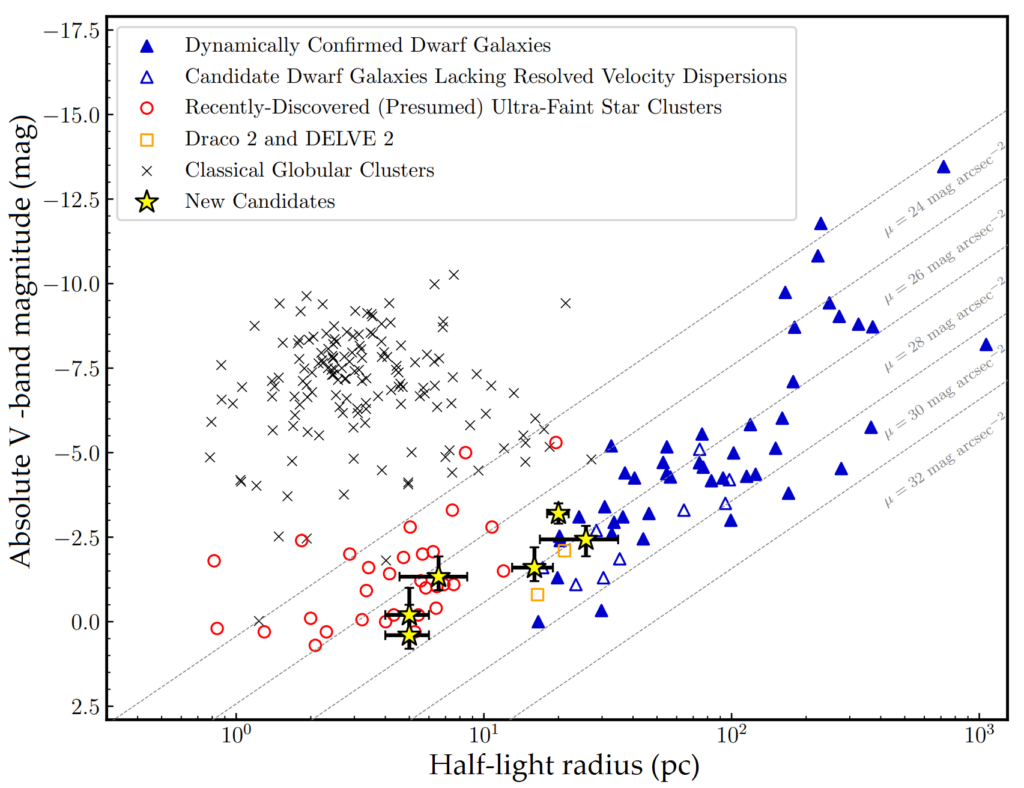 Finding these dwarf galaxies and companions around our galaxy is important for several reasons. As galaxies like the Milky Way can grow by merging with smaller galaxies over their lifetime, dwarf galaxies give us an idea of what structures were involved in these mergers. Similarly, star clusters (like those discovered in this paper) let us take a peek at what’s leftover from these past interactions.

Milky Way satellites can also be researched using astronomical simulations, but over time this has led to the “missing satellites problem”, where simulations predict far more satellites around the Milky Way than we actually observe. This problem may have a simple solution though: most of these satellites might actually just be so small that we’ve been unable to see them. Studies like today’s paper provide more evidence that these satellites are not “missing”. Instead, they’re just “hiding”!

It’s likely that many more satellites are still waiting to be found, and the paper concludes by referencing the Vera C. Rubin Observatory, a new telescope due to start operating in 2024, which is hoped to discover more ultra-faint companions. Rubin will observe about half of the night sky in incredible depth, and as this paper shows, there are plenty more dwarf galaxies waiting to be found. Looks like we’re not done getting to know our galactic neighbours just yet!

Three roads diverge in a galaxy’s future, and the chosen one is almost entirely random!

The secret ingredient of the Magellanic Stream