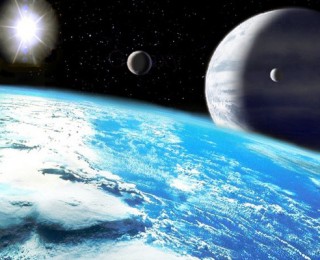 This paper reports that the M-dwarf star GJ667C is orbited by a system of six, maybe seven super-Earths, of which three are in the habitable zone. This is an extraordinarily closely packed system of planets, straight from science fiction! 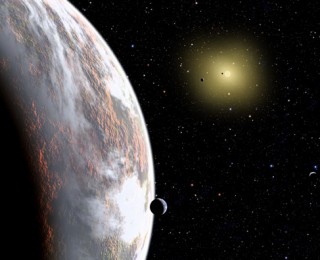 This paper describes the detection of transits for a planet previously identified via radial velocities (RVs). Measuring the properties of the planet with both the transit and RV method allows the authors to determine the density, which suggests it should have a lot of volatiles (e.g. H2O, CO2, etc). This discovery is particularly exciting because the planet orbits a bright, nearby star: ideal for follow-up observations to characterize its atmosphere! 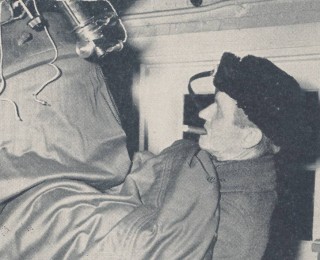 Caption: H. A. Sawyer loading plates into the Harvard 16” Metcalf Doublet telescope. Picture from http://hea-www.harvard.edu/DASCH/telescopes.php Paper Title: 100-year DASCH Light Curves of Kepler Planet-Candidate Host Stars Authors: S. Tang et al First Author’s Affiliation: Harvard-Smithsonian Center for Astrophysics, Cambridge, MA; Kavli Institute for Theoretical Physics, Santa Barbara, CA; California Institute of Technology, Pasadena, CA Journal: Publications of the Astronomical Society of the Pacific (Submitted) Introduction: the DASCH projectAstronomy has advanced in leaps and bounds over the last few hundred years. Perhaps the single greatest advance has been the switch from observing with our eyes to observing with cameras. Where once we inspected the heavens with our eyes and relied on sketches to record what we saw, now we attach imaging mechanisms directly to the telescope. Not only does this allow us to collect more photons, imaging mechanisms also give us the ability to store data for later analysis. A little more than a century ago, astronomers at Harvard made the switch to using photographic plates to image the heavens. Each plate, once analyzed, was cataloged, archived, and forgotten…until now.Researchers at Harvard recently recognized the promise of the data being held in these archives. Over a century’s worth of observations of the sky are recorded in these plates. By contrast, most objects observed as part of other projects have no more than a few decades worth of observations at best. This dataset offers us the remarkable opportunity to study how stars have evolved over almost a century. Who knows what long-term trends or cycles might be identified?To realize the potential of this dataset and answer questions like these, the... 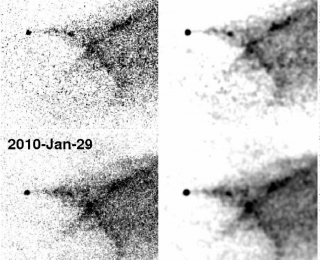 Paper Title: Dynamics of Large Fragments in the Tail of Active Asteroid P/2010 A2 Authors: Jessica Agarwal, David Jewitt, and Harold Weaver First Author’s Affiliation: Max Planck Institute for Solar System Research, Germany Journal: The Astrophysical Journal (Accepted) IntroductionIn January 2010, the LINEAR survey make a remarkable detection: it discovered an asteroid with a long, X-shaped trail (see Figure 1). Dynamical analysis of the tail (analyzing its orbit and stability) indicated the tail had been formed in a single event around nine months prior to the January 2010 observation.  This is very exciting: by studying this object, it’s possible, for the first time, get a direct observational handle on the process of asteroid disintegration! This is very important to understanding the evolution of the population of small asteroids in our solar system, as well as to understanding the formation of meteoroid streams which give rise to regular meteor showers like the Leonids.  Such studies are particularly important in light of recent initiatives by private industry and NASA towards mining asteroids.  Figure 1: Hubble Space Telescope (HST) image of the active asteroid P/2010 A2. The asteroid is the dark dot on the left. The tail is the material on the right, demarcated by an X-shape. The tail seems almost detached from the asteroid, an indication (along with the dynamical analysis) that it originated in a discrete, recent event. MethodPrevious work had indicated either a collisional (something smashed into the asteroid) or rotational (the asteroid spun itself apart) origin for the tail. In this paper, the authors took many Hubble Space Telescope (HST) images of the asteroid over time, starting in January 2010, to... 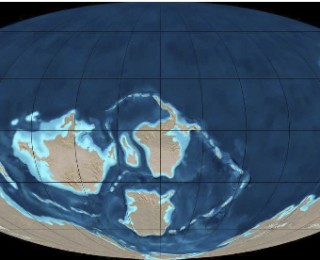 As we discover exoplanets in droves and the first hints of habitable worlds emerge, astronomers are starting to look to the next step: the search for life on those worlds.