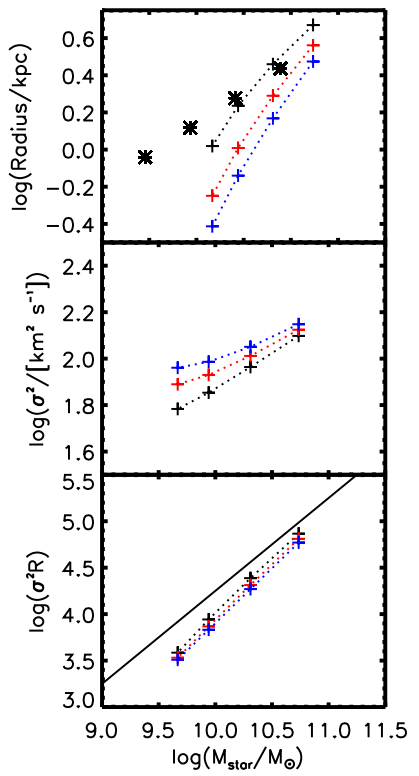 The general picture of galaxy formation was discussed a bit in an earlier Astrobites post.  To recap, it is thought that mergers of smaller galaxies to form larger “merger remnants” is one of the main ways that galactic structure has evolved in the Universe.  The new galaxy’s morphology (size, shape, velocity distribution, etc.) depends strongly on the morphology of the smaller galaxies that merged to form it.  Specifically, it is thought that the merging of disk galaxies is one of the main ways that elliptical galaxies form.

Elliptical galaxies turn out to have relatively tight relations among stellar mass (i.e. the total mass of stars in the galaxy), size, and velocity dispersion (or the distribution of stellar velocities in the galaxy).  For example, there is the Faber-Jackson relation, which is an empirically determined power-law relationship between galactic luminosity (hence, stellar mass) and velocity dispersion.  In fact, in the three-dimensional space of stellar mass, size, and velocity dispersion, elliptical galaxies tend to lie on a single “fundamental plane”.  The challenge, then, is to find a theoretical model of galaxy mergers that can reproduce and explain this fundamental plane.

The way that Covington et al. attack this problem is by using a common technique called semi-analytic modelling (SAM).  SAM essentially works by first building a simple model of galaxy mergers based on physical principles such as, for example, conservation of energy and the virial theorem (which Ian discussed earlier).  Then, any unknown parameters in the model are supplied by looking at the statistical outcomes of large collections of simulations, e.g. the galaxy simulations run by T. J. Cox  (Cox 2004, PhD Thesis), or the Millenium dark-matter-only simulation (Springel et al.  2005).

Ultimately, the authors found that the fundamental plane of elliptical galaxies can be better reproduced if the theoretical models of galaxy mergers include a term that accounts for energy dissipation from gas friction in the galaxies.  Accounting for dissipation strongly affects so-called “wet” mergers, where two gas-rich galaxies merge, whereas “dry” mergers are mostly unaffected.  If progenitors have a decreasing gas fraction with increasing mass (which we expect as larger galaxies are those that have had more time to convert their gas into stars), the authors find that this dissipation effect steepens the predicted size-mass relation of the elliptical merger remnants, as compared to that of their disk galaxy progenitors.  This difference in size-mass relations is observed in real galaxies.

In conclusion, dissipative effects during galaxy mergers may be a crucial ingredient in the process of elliptical galaxy formation.