Title: Model Atmospheres for Massive Gas Giants with Thick Clouds: Application to the HR 8799 Planets and Predictions for Future Directions

Taking a picture of an exoplanet is an incredibly challenging observational problem, because exoplanets are so close to their host stars and are orders of magnitude fainter (the common analogy is that directly imaging an exoplanet is like looking at a firefly right next to a foglight — on the moon!). Nonetheless, observers in the past few years have been working hard on new instruments that block out starlight and make these observations possible. Several planets have been discovered and are being studied at several different wavelengths.

Planetary modelers have been particularly puzzled by some of the latest observations of the only multi-planet system that has been directly imaged so far, HR 8799. There are four planets orbiting the star in this system, announced by Marois et al. in 2008. Currie et al. (2011) published observations of the HR 8799 system taken using three telescopes (Subaru, VLT, and MMT) from 1 to 5 microns. They then used these infrared observations at several wavelengths to constrain their models of the planets’ ages, temperatures, masses, and compositions. Their results were very interesting because the photometry of the HR 8799 planets showed that these planets look much redder in color than can be explained by the classic brown dwarf models (what brown dwarf folks call the ‘L/T dwarf sequence’). Currie et al. suggested that thicker cloud layers may explain this reddening of the planets and indicated that more extensive cloud models should be developed.

In this paper, Madhusudhan, Burrows, and Currie develop a whole grid of model planets with a range of temperatures, gravities, and metallicities, and then add different layers of clouds to these models. Their models span planet and brown dwarf temperatures from 600 K to 1700 K, surface gravities from 103.5 to 105.0 cm/s2, masses between 2 and 40 Jupiter masses, and ages between 4 and 5 billion years. They assume hydrostatic equilibrium, radiative equilibrium, and chemical equilibrium, and calculate the abundances of elements as a function of the pressure and temperature within each layer of the planet’s atmosphere. 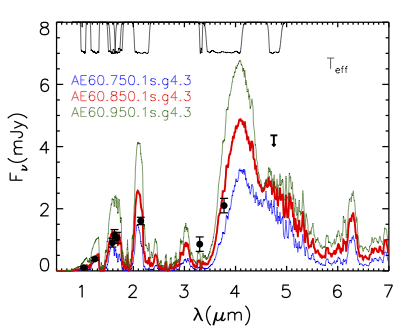 This plot shows how the spectra change if we vary the effective temperature between 750 (blue line) and 950 K (green line), while holding the clouds and gravity constant. Note that increasing the temperature of the planet increases the flux at some wavelengths.

They add clouds with a modified exponential particle distribution at the layers where they expect materials to condense out, based on the chemistry of condensation. Unlike Earth with water clouds, or Jupiter with ammonia clouds, these exoplanets are expected to be hot enough to have silicate clouds (forsterite) or iron clouds! They vary the particle distribution between two extremes — clouds extending to the top of the atmosphere and clouds cutting off sharply at altitude — with two intermediate distributions. 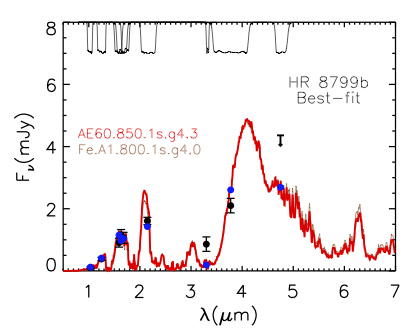 With this extensive grid of models (both with and without clouds), they compare the spectra  produced  by these models with the observations of the HR 8799 planets. They find a few key results:

The authors recognize that for the current observations there is a degeneracy between the forsterite clouds and iron clouds — we can’t tell them apart. They suggest that this could be resolved by observing in the visible or the mid-infrared where the spectra from the two types of clouds would look very different.

The authors suggest that these objects could be part of a completely new class of substellar atmospheres; the clouds required to explain the distinctly red color of these planets are much thicker than the clouds of L and T brown dwarfs. New instruments currently being built to image planets, including GPI and SPHERE, will image many of these planets and give us a lot more information about how to correctly model them. The models generated in this paper will likely be very useful in the next few years as these instruments begin to detect new planets.