The HR 8799 planetary system is one of my favorites: it’s the only directly-imaged multi-planet system discovered to date and has four known planets. These planets are massive, between 5 and 30 times the mass of Jupiter. We know that planets are born very hot—thousands of degrees—and cool over time; since these planets are still young (around 100 Myr) they still glow brightly in the infrared. To observe them, we block out the starlight with a coronagraph and actually measure the photons emerging from the hot depths of the planetary atmosphere. (Note that this is very different from measuring the atmosphere indirectly using transmission spectra, described here and here).

Two years ago this month, I wrote my very first astrobite about the puzzlingly cloudy atmosphere of the outermost planet, HR 8799b;  today I’m revisiting the system and looking at a recent paper which measured spectra of not just one planet, but the entire planetary system. This is the first comparative spectroscopic study of any multi-planet system (other than our own Solar System of course).

These observations were taken using an instrument called Project 1640. This instrument is designed to block out as much of the host star’s light as possible using a coronagraph combined with an adaptive optics system which corrects for atmospheric turbulence. The light is then passed to an integral field unit to take a spectrum for each point in the field of view. This means that spectra of each of the four planets are taken simultaneously. Figure 1 shows an example of how well the optical system alone reduces the speckles in the  observed images.

The coronagraph would ideally block every photon from the host star. However, tiny imperfections in the adaptive optics correction to the atmospheric turbulence and imperfections in the rest of the telescope optics mean that some parts of the starlight remain all over the image. Since some of these residual speckles are due to telescope optics which change slowly over the course of the observation, they actually can’t just be averaged out by taking enough exposures and they can’t just be measured once and subtracted; some speckles still remain.

For this reason, they develop two different advanced speckle-removing algorithms which are designed to remove speckles without also removing science signals. They test these by injecting fake planet and brown dwarf spectra into an image and then determining what the algorithm would find. They find that unlike some previously used algorithms, the new methods result in high-fidelity recovery of the injected spectra. Figure 2 shows how well the two algorithms are able to reduce remaining speckles, allowing us to see the planet signals.

The spectra that they find for the four planets are shown in Figure 3. A few conclusions are quite robust: 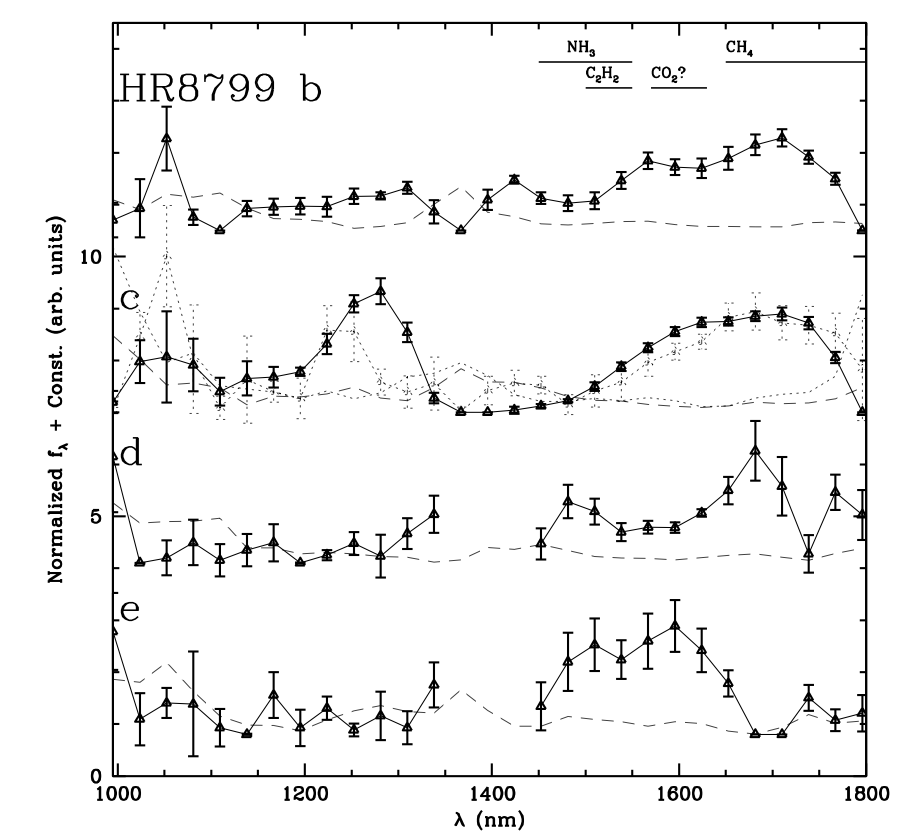 The spectra for each of the four planets are shown, offset from each other for clarity. The dashed lines show the noise level estimates. Locations of the tentative detections of molecular features are shown at the top.

They also propose a handful of potential absorbers in each planetary atmosphere, given the location of major absorption features. For example, they suggest that 8799b may contain ammonia and/or acetylene and carbon dioxide, but little methane, whereas 8799d contains methane, acetylene, and carbon dioxide but ammonia is NOT definitively detected. These are all tentative suggestions based on the broad molecular features, but certainly suggestive.

Towards a New Era of Exoplanets

This is this first time we have ever been able to measure the spectra of multiple planets in a system outside of the solar system. It represents a quiet first step into a new mode of exoplanet science: beyond the discovery of thousands of exoplanets and the characterization of single hot Jupiters and into an era of comparative planetology.