But what kind of companion is it? By the International Astronomical Union’s definition, if the companion is larger than about 13 Jupiter masses (the minimum mass for fusing deuterium), it is considered a brown dwarf, not a planet, which could have implications for the formation and evolution of the system. We’ve talked about brown dwarfs here before: they’re about the same size as Jupiter, but much more massive. The companion to HD 100546 has not been detected directly, but previous modeling of the surface density profile (surface density vs. radius) of the disk predicts the companion is at least 1 Jupiter mass and orbiting at 8 AU. The authors of this paper decided to measure the mass indirectly by studying the companion’s influence on the disk.

The authors were particularly interested in the far edge of the gap, where the outer disk starts. The shape of a gap wall depends on the disk height and viscosity and the mass of the companion in the gap, so a detailed study of this wall can be used to constrain the mass of the companion and determine whether it is a giant planet or a brown dwarf. Previous work has shown that this edge is not a sharp vertical wall but a more rounded one, gradually increasing in density farther from the gap.  In this paper, the authors used interferometric observations to determine the shape of the wall, then used hydrodynamical modeling to constrain the mass of the unseen companion.

Determining the shape of the wall from the spectral energy distribution (SED) is a little tricky, because the material at the disk wall is more exposed to the light from the star. It heats up and shows increased emission, which dominates over the emission from material at other radii. The authors used previous observations from the Mid-Infrared Interferometric Instrument (MIDI) on the European Space Organization’s Very Large Telescope Interferometer (VLTI) to measure the surface brightness vs. radius of the disk. Then they fit the data to different models with a vertical, steep, or rounded wall (see Fig. 1). It’s impossible to find a perfect fit because the disk is not axisymmetric (rotationally symmetric), but they found a small range of parameters that gives them a good fit to the data and indicates that the disk wall is moderately rounded. 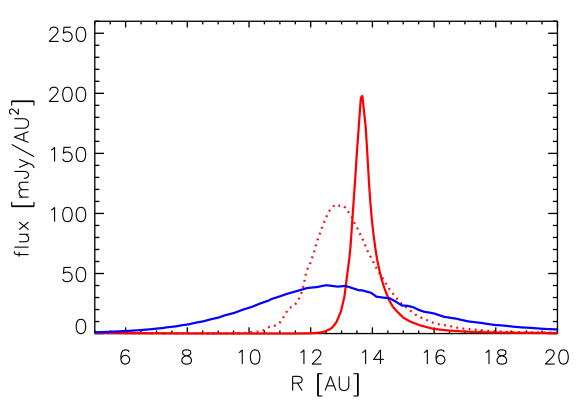 Fig. 1: Flux vs. radius for the disk with three different models for the sharpness of the disk wall. A completely vertical wall (solid red line) had a narrow brightness peak where the wall is heated by the star light. The steeply rounded wall (dotted red line) is broader, while the gently rounded wall (blue line) has a very broad peak, because a wider range of material is exposed directly to the star’s light.

Once they understood the shape of the wall from observations, the authors then modeled the disk and companion with a hydrodynamics code called Fargo, testing a range of companion masses from 1 to 80 Jupiter masses and a range of viscosities. Next, they compared their models with their fit to the observations, considering both the wall shape and the depth of the gap (how much gas and dust is left in the gap). The best-fit model had a 60 Jupiter mass companion at 10 AU (see Fig. 6 for a comparison of the model and the data). This would make the companion a brown dwarf, making HD 100546 a binary system. As a binary system, HD 100546 is not particularly unusual. Binary systems are common around these types of stars, and the orbital period of the star and the brown dwarf is also common among binaries. 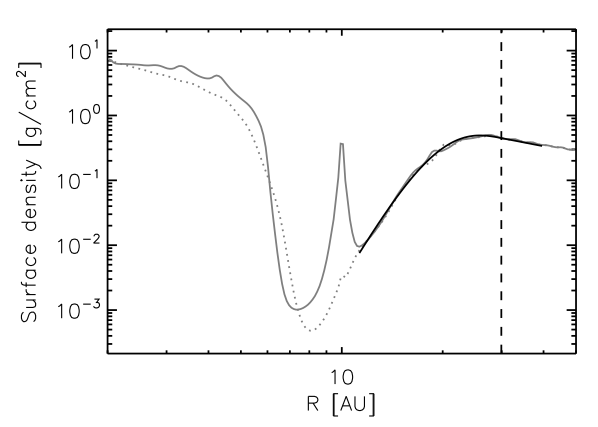 Fig. 2: The surface density of the HD 100546 disk vs. radius comparing models with a 60 Jupiter mass planet with (dotted line) and without (solid grey line) accretion to MIDI observations (black line).