When we look out at the Andromeda galaxy (our nearest neighbor), we’re seeing it as it existed two and a half million years in the past, because its light has taken time to reach us. For distant galaxies, it’s not unusual for their light to be reaching us from a few billion years ago- and the farther out we look, the farther back in time we go. What we see is that galaxies back then were much smaller: today they might be as much as twice as large (or more) as galaxies were when the universe was half of its present age! Something in the intervening time must have really puffed them up— but what? To answer this, researchers have frequently tried to pin down the effect a galaxy’s environment has on its growth. 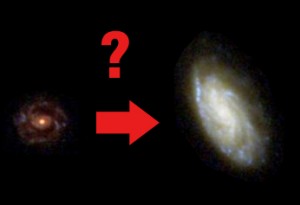 How did galaxies grow from their youthful state (left) to what we see today (right) ?

Generally speaking, galaxies might grow in clusters— large, gravitationally-bound collections of other galaxies— or by themselves in empty space (what we call the field). Galaxies clusters are hot, dense, and highly active, swarming with other galaxies in a gravitational well. You might rightly expect that the extremes of this environment will affect how a galaxy grows, forms stars, and takes shape— and it does. However, a galaxy’s fate is also partially determined by how it began: how massive it was to start, and when it was formed. The tough part is figuring out which of these factors dominate a galaxy’s subsequent evolution, the so-called “nature versus nurture” problem, which this paper addresses.

The authors used a massive data set of almost 100,000 galaxies pulled from the UKIRT Infrared Sky Survey (UKIDSS). Altogether this includes galaxies from when the universe was about 3 billion years old, to when it was about 6 billion years old: a time span of half of the age of the universe. We have seen galaxies forming just 500 million years after the big bang, so the youngest galaxies in this sample might be only 2.5 billion years old- quite young by today’s standards! By seeing how the average properties of these galaxies change in that time frame, the authors can quantify how galaxies have changed and evolved as a function of their environment.

How do you quantify a galaxy’s environment, though? One way is to measure the number density of galaxies in each region of the survey. You can do this by counting galaxies in a fixed volume and dividing by the volume. Clusters have higher number densities, and field galaxies exist in regions of low density. 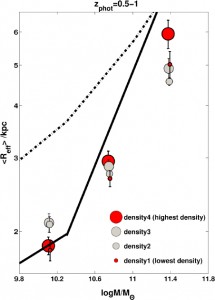 Galaxy size as a function of mass and density. You can see that while size increases with mass, it increases with density as well. From Figure 6 in the text.

Having determined this environmental density for each galaxy, the authors can then see how things like a galaxy’s mass, color, size and shape all depend on density thoughout the time period covered by their sample, building up a picture of galaxy evolution.

This paper actually investigates a bunch of important changes galaxies have undergone, but the growth in galaxy size is the most important result. The nature side of things comes in seeing how a galaxy’s size growth depends on its mass. As expected from previous investigations, more massive galaxies are indeed found to be bigger. There is a clear size-mass relationship.

The nurture side of it is found in the size-environment relationship. After accounting for the size-mass relationship, the authors still find that there is a very significant density effect on the size of galaxies. Galaxies in denser environments are larger, on the whole. These results allow one to actually determine the relative impact of nature versus nurture in galaxy growth.

So what does it mean? For one thing, a result like this helps astronomers figure out how important galaxy collisions (or “mergers”) are when forming the galaxies we see today— that would be on the nurture side of things. Galaxies in denser environments are more likely to merge with one another, leading to more massive and larger galaxies on the whole. Altogether this helps us figure out how galaxies like our own Milky Way have come to look the way they do today.