The Evolution of the Bar Fraction 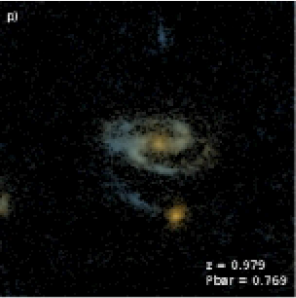 A barred galaxy at redshift z = 0.979 observed in the HST-COSMOS survey and morphologically classified by volunteers in the Galaxy Zoo Hubble Project.

There are many processes that are thought to affect the evolution of the shape (morphology) of a galaxy through it’s lifetime. It’s thought that these processes differ across cosmic time, depending on the environment in which the galaxy is found. In the hotter, denser, early Universe at high redshifts it is thought that this evolution is dominated by mergers, galaxy-galaxy interactions and ram pressure stripping; all of which are violent, dynamically fast processes. Conversely, in the low redshift Universe, mergers are rare in all but the densest regions (e.g. clusters) and a slower evolution occurs often, driven by processes internal to the galaxy (secular evolution). This calmer period of transformation is thought to lead to the formation of stable disc galaxies, within which bars can naturally form in order to redistribute angular momentum and funnel gas inwards to the galactic centre.

The ratio of the number of disc galaxies which do and do not contain bars is known as the bar fraction; in the local Universe this is thought to be around 50%. Understanding whether (and how) this fraction changes across cosmic time (i.e. with redshift) is important for determining the processes which dominated galactic evolution in the early Universe and at which epoch secular evolution became significant.

The paper makes use of the very first results from the Galaxy Zoo Hubble project, which asked volunteers to morphologically classify HST-COSMOS images of distant galaxies out to a redshift of z=1. This includes the biggest sample and, thanks to the depth of the HST-COSMOS survey, the most distant sample of galaxies ever used to study this effect. 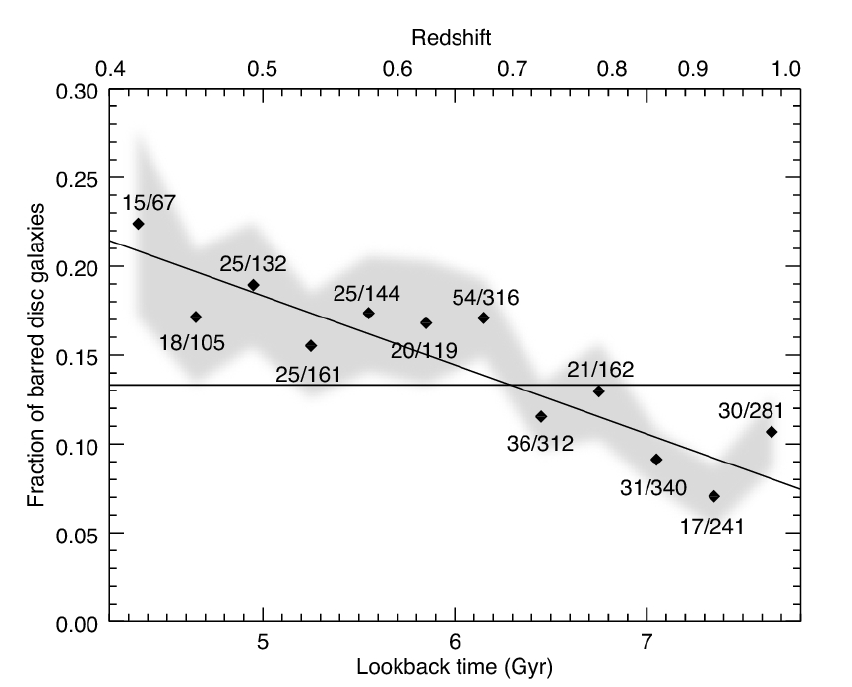 Figure 1. The change in the bar fraction with redshift. The dotted line shows the mean bar fraction for the whole sample, the solid line the linear relationship and the shaded region the 1σ errors. Figure 7 in the Melvin et al 2014 paper.

Figures 1 and 2 show the results of this study, where the fraction of bars is observed to decrease by approximately 15% across 4 Gyrs of cosmic time. Extrapolating this trend to a higher redshift, where the bar fraction would theoretically diminish to zero, suggests a timeframe for the era of change in the evolution of disc galaxies from violent to secular processes. Future observations out to this redshift will therefore be necessary to calculate whether this is the case.

When this evolution is studied in varying mass bins, as in Figure 2, the steepest decrease in this bar fraction is in the most massive disc galaxies. This suggests an influence on the overall bar fraction evolution shown in Figure 1, to be skewed due to these high mass disc galaxies. This bimodal trend where the bar fraction evolves more slowly for lower mass disc galaxies suggests that different processes may dominate the evolution of smaller mass galaxies. Possibly the bar formation is disrupted by some mechanism in lower mass galaxies or possibly they host different types of bars. 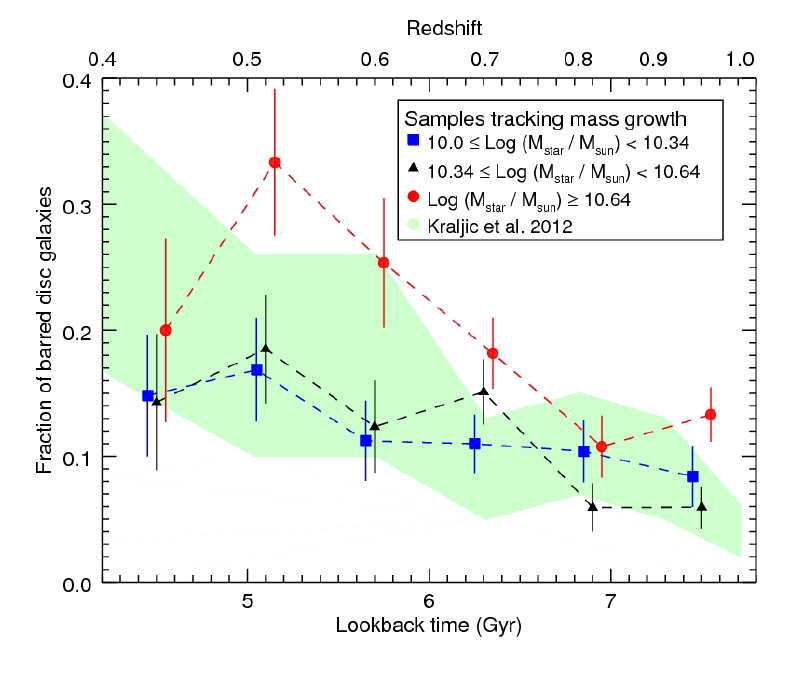 This idea has previously been voiced based on similar observations of the local Universe; finding similar results at higher redshifts therefore gives more weight to this argument and is something that will have be investigated by further observation and simulations.

These observations identify a very important point in disc galaxy evolution, where we cease to see mergers as the dominant mechanism and secular processes allow the galaxy to evolve more calmly and on longer timescales.