Nearly all of the presently-known exoplanets have been discovered by one of two methods: radial velocity observations or transit detections. Both of these methods are optimized for finding planets in short-period orbits: the amplitude of the radial velocity signal decreases with increasing orbital period, while the probability a planet transits its host star decreases for planets at larger separations. Therefore, while our knowledge of planets at small separations is becoming more complete, we know very little about planets at orbital separations similar to Jupiter.

In the future, the astrometric method of finding planets will be ideal for probing the planet population at these wide separations. By measuring the positions of stars very precisely, astronomers can look for the physical wobble of these stars as they are orbited by companions. This method has several advantages: the more distant a planet, the further from the star the system’s center of mass, so the wobble is larger. Moreover, since the size of the wobble can be observed in two dimensions on the sky, the relative size of the wobble in each direction provides information about the inclination of the system (specifically, the cosine of the inclination). Therefore, the true mass of the planet can be determined, unlike radial velocity observations which can only provide a minimum mass which depends on the system inclination.

Unfortunately, the angular motion of a star becomes smaller as its distance from Earth increases, meaning this type of observation is best suited for nearby stars. Moreover, the angular wobble is expected to be thousandths of an arcsecond (a few nanoradians) for nearly all nearby stars, so very precise measurements are required.

While most modern optical imaging systems don’t have the resolution to detect planets through astrometry, very long baseline interferometry can provide the requisite precision at radio wavelengths. The resolution that can be attained through interferometry is related to the distance between an array’s two most distant telescopes; the NRAO Very Long Baseline Array, a collection of ten telescopes spanning the western hemisphere from Mauna Kea, Hawaii to St. Croix, US Virgin Islands, can reach a precision of 100 microarcseconds, enough to measure planetary-induced wobbles. Although most stars are not strong radio emitters, certain magnetically active M dwarfs and brown dwarfs do produce detectable radio emission. The authors of this paper study a nearby M dwarf in the radio to look for planet-induced wobbles.

Astrometric observations of the M dwarf TVLM513. At left are the true observations, including an elliptical fit for the parallax of the star and a linear fit for its proper motion. At right are the residuals to the fit. These data allow the authors to eliminate the possibility of many massive planets, which would cause the star to wobble more than what is observed.

The star analyzed in this paper, TVLM513, is about 10 parsec away with a mass approximately 8% the Sun’s. Between March 2010 and August 2011, the authors observed this target nine times with the VLBA. Low mass stars such as this one are often variable in the radio, but the observers detected significant radio emission from the target in six of the nine epochs. The authors estimate that they can determine the position of the star in both right ascension and declination to 0.23 milliarcseconds (below): this corresponds to knowing the space position of the star to within half a solar radius! 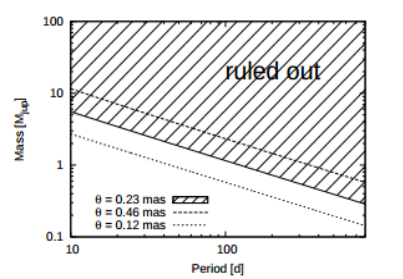 From the VLBA observations, the authors are able to rule out the presence of massive companions. Because the size of the astrometric wobble induced by a given planet increases with the planet’s orbital period, lower-mass planets are eliminated at longer periods.

From these observations, Forbich, Berger, and Reid are able to rule out many potential orbiting companions, as shown to the right. They rule out planets four times the mass of Jupiter in 16 day periods, all the way down to Saturn-mass objects in 710 day periods. Remember, astrometry is more sensitive to more distant planets, as long as the planet is not so far away from the star that its orbit is much longer than the observing baseline (so the wobble would not be detected). The authors do find weak evidence for a signal that could correspond to a 2.5 Jupiter mass planet in a 70 day orbit, but their observations are not sensitive enough to unambiguously determine if this signal is astrophysical or due to statistical fluctuations. With more observations, this potential companion can be detected or ruled out.

After decades of effort, we are finally reaching a point where astrometric planet detections are feasible, although only for the nearest stars at specific wavelengths. A new generation of telescopes, such as the space-based Gaia mission and ground-based CHARA optical interferometer at Mt. Wilson, California, are likely to enable the first bona fide detections of planets through astrometry, leading to a new generation of planet detection and characterization.