Now *you* can name a planet! 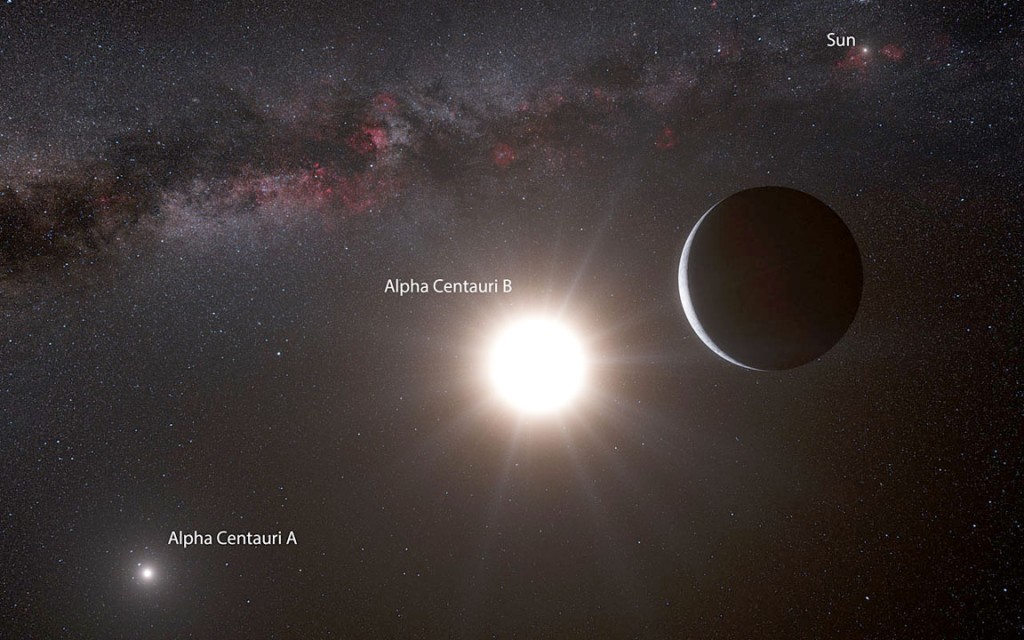 An artist’s impression of Alpha Centauri Bb, the closest exoplanet to Earth. What would you name this planet? The for-profit organization Uwingu asked that question and sparked a controversy over who gets to name exoplanets.

On August 14th, the International Astronomical Union (IAU) unveiled a system for giving non-technical names to exoplanets that involves public input, reversing its opinion on the public’s role in naming planets (see this Universe Today article).  In a previous statement this spring, the IAU announced that it only endorsed the technical naming scheme that has been common practice in the scientific community, resulting in names such as Kepler-16 b (the “Tatooine” planet with two suns) and GJ 1214 b (a potential water world).

Controversy over how scientists should name exoplanets arose when several organizations, but especially one called Uwingu, created forums that solicited planet names from the public.  The for-profit organization Uwingu ran a naming contest for Alpha Centauri Bb, an Earth-mass planet in the nearest star system to us at a distance of only 4 light years (see illustration above).  Participants who donated $4.99 could nominate a more imaginative name for Alpha Centauri Bb, and participants who donated 99 cents could vote for their favorite name.  The money Uwingu raised funded to scientific education and research.  In its April statement, the IAU condemned Uwingu:

“Recently, an organisation has invited the public to purchase both nomination proposals for exoplanets, and rights to vote for the suggested names. In return, the purchaser receives a certificate commemorating the validity and credibility of the nomination. Such certificates are misleading, as these campaigns have no bearing on the official naming process — they will not lead to an officially-recognised exoplanet name, despite the price paid or the number of votes accrued” (IAU press release, April 2013).

Although many astronomers balked at Uwingu’s financial method for soliciting nominations for names, those same astronomers and other astronomers expressed their disappointment with how the IAU handled the situation.  They reasoned that one of the priorities of the astronomical community should be to promote public engagement with science, and Uwingu and other groups that encouraged the public to come up with names for planets were succeeding in this endeavor.  (See Phil Plait of Bad Astronomy’s praise for Uwingu here.)  For many people (including non-scientists), the IAU’s besmirchment of Uwingu’s efforts seemed counterproductive.

The IAU’s reversal of opinion on public involvement in naming exoplanets seems to stem directly from this criticism.  However, the IAU’s colloquial naming scheme comes with a list of rules.  For instance, a planet name cannot be the same an existing name for an astronomical object, nor can it be profane or offensive.  (See this XKCD comic for some bad ideas.)

The most applicable rule with regard to organizations like Uwingu is that the IAU will only accept planet names that are nominated without any financial transaction, which bars Uwingu from nominating its most popular names to the IAU.  However, even without this rule, the existence of the IAU’s free nomination system might undermine Uwingu’s efforts to raise funds, although it will continue Uwingu’s tradition of public involvement in science.

One criterion is that the discoverers must approve the proposed planet name.  While this seems reasonable, large, modern planet surveys (such as the Kepler Mission) require follow-up observations from many different teams to confirm the existence of a planet.  Usually, many scientists study and characterize a planet before the scientific community accepts its planetary status.  In these cases, who is the main “discoverer” of the planet who gets to approve the public’s chosen name?  Also, this criterion can be at odds with the IAU’s other planet naming rules.  For instance, Xavier Dumusque, the principal author on the discovery paper of Alpha Centauri Bb, endorsed Uwingu’s naming competition.  However, the IAU’s current naming policy does not allow fundraisers as a means of generating planet names, in direct contradiction with Dumusque’s desire.

Jason Wright’s post highlights another issue that the IAU has not addressed in its new naming scheme.  The April statement cited exoplanet.eu as “a catalog of the exoplanets discovered, with their officially assigned catalogue designation,” when in fact there are many catalogues that have different lists of the exoplanets discovered.  For example, exoplanets.org only lists exoplanets that are validated in peer-reviewed journal articles, whereas exoplanet.eu includes exoplanets that are only candidates, and the Exoplanet Archive lists and distinguishes planets at various stages of the confirmation process.  Since astronomers debate whether certain planets exist or not (for example, the infamous GJ 581g), there is no universally accepted list of exoplanets among scientists.  At what point is the scientific community confident enough in the detection of a planet to name it?  The IAU’s new statement is not clear about which planets deserve names and which require more thorough confirmation.

Hopefully the IAU will resolve these ambiguities and contradictions in its naming scheme.  In the meantime, the IAU “fully supports the involvement of the general public, whether directly or through an independent organised vote, in the naming of planetary satellites, newly discovered planets, and their host stars” (IAU press release, August 2013).

What would you name an exoplanet?  Now is your chance.  Email [email protected] with your nomination today.