The effect of a cluster of galaxies on the shapes of galaxies in the background due to gravitational lensing. To make the effect more evident, the background sources are assumed to be round. When we look at them through the web of dark matter, galaxy ellipticities are distorted tangentially surrounding the center of the dark matter halo that appears within the small black box. From Kitching et al. (2010).

Citizen science projects have been very successful in involving the public in everyday research. Galaxy Zoo had tremendous participation in which volunteers classified galaxies and inspected images of astronomical objects,and the findings led to many publications. The [email protected] project asked users to identify dust particles collected in the encounter of the Stardust spacecraft with comet Wild 2. [email protected] has engaged several million users around the world, who donate part of their personal computer time to process the deluge of SETI data trying to find narrow-bandwidth radio signals from space. ‘Observing dark worlds‘ (in partnership with Kaggle) is different in that it requires the user to write an algorithm to solve a problem. It is more similar in spirit to the GREAT challenges, a competition to find the best algorithm to measure the shapes of galaxies in simulated astronomical images.

In the competition, the users were given two months to ‘train’ their algorithms in a set of catalogues of galaxy positions and ellipticities where the true position of the dark matter halo and subhalos were known. Then, there was a ‘public test set’, a catalogue of galaxies and shapes for which they did not know where the dark matter halos were. The task was to find them. They received a score that would tell them how well they had done and were then allowed to iterate and improve on their algorithm. Finally, there was a ‘private test set’. Once again, users ran their algorithms on the set and submitted the results. On this final set, the score was not provided and the results were used to rank the performance of the algorithms. 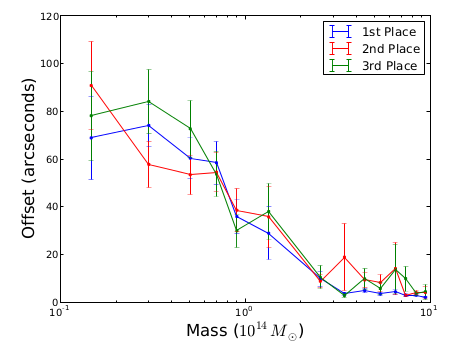 The performance of the three winning algorithms in terms of the offset between the reported center of the dark matter halos and their true positions as a function of the mass. More massive halos are located to greater accuracy. Compare to LENSTOOL, which can locate a 1013 solar mass halo (more or less the halo of a group of galaxies) with a typical uncertainty of 10”.  From Harvey et al. (2013).

357 users presented algorithms for this search.
The three winning algorithms are presented in detail in the paper. Their performance was evaluated by looking at the typical distance between the true halo center and the reported position, and whether there was a bias in a particular direction in the offset. The winning entries displayed a >30% improvement over LENSTOOL, one of the algorithms most widely used by the astronomical community.

In a nutshell, the top two algorithms use the information in the training set to construct models for the dark matter halos. Then they compute the probability of a dark matter halo being at a given position using the ellipticities and positions of the galaxies in the private simulated maps. The third algorithm constructed a model for the ellipticity of galaxies based on the existence of three classes of halos -large, medium and small- and looked for halos maximizing a function that compares the data to the model.

How to Read (LSS)Tea Leaves to Better Understand Dark Energy

The Crowded Cosmos: Effects of Blended Galaxies on Cosmic Shear