Figure 1: Radio emisson from the galaxy M51 as measured using the VLA telescope and data from the Effelsberg 100-m telescope in Germany. The right hand side gives the orientation of magnetic field lines measured by the polarization of the observed radio emisson. Source:  Rainer Beck (MPIfR Bonn, Germany), Cathy Horellou (Onsala Space) ; Image courtesy of NRAO/AUI

From observations we know that magnetic fields are everywhere: in solar systems,  massive stars, gas clouds, galaxies (Fig. 1), and galaxy clusters. The origin of magnetic fields in the Universe is poorly understood, however. We suspect they were initially formed as very weak fields at around 10-20 G, or about 1021 times weaker than a refrigerator magnet, but are still troubled by how they grow to the field strengths seen today. For example, in a typical galaxy such as that in Fig. 1 (see this astrobite for an atypical galaxy), the plasma contained within the galaxy has a roughly 10-6 G strength field (Earth’s magnetic field is about 0.3 G). Ultimately the journey of the magnetic field over time has direct implications for the evolutionary process of its host galaxy, the star formation rate in galaxies, and the supernova rate in galaxies over time. Therefore, we would like to know whether or not this a recent phenomena, or have the fields been long established since a galaxy’s infancy? The authors conduct a theoretical study of magnetic field evolution in early galaxies, investigating the physical processes that amplify galactic fields from their low primordial values to their currently observed strengths

In general we have a fairly good grasp on the most efficient mechanism by which initially weak magnetic fields are amplified; this is referred to as the small-scale, or turbulent, dynamo.  In certain plasmas, like those in a galaxy, magnetic field lines are “frozen in”, moving as the plasma moves. If the plasma is stirred around and becomes turbulent (think of stirring spaghetti noodles in a pot of water), the magnetic field lines become twisted, pulled, and stretched within the plasma. This pulling and stretching ends up strengthening the magnetic field, drawing energy from the kinetic energy of the plasma. This picture becomes much more complicated in a real galaxy however, and we need numerical simulations to help us better understand what is happening as a galaxy evolves.

The authors focus on simulating this process by constructing a simulation of a young galaxy (similar to one that would be found at about z~10) that begins with an initially weak magnetic field. They take two limiting cases for how the young galaxy would look, modeling both a spherical and disk galaxy. For reference, their spherical galaxy has a diameter about fifteen times smaller than that of our Milky Way, and the disk galaxy has a diameter roughly twice that of the spherical galaxy. They are designed to both have the same mean density of gas, and the same total mass, about 100 times less than the Milky Way. They simulate how the magnetic field evolves in the galaxy over time using two different mechanisms for generating turbulence: 1) the accretion of gas onto the galaxy during its growth, and 2) turbulence generated from supernova explosions pushing around gas in the galaxy. Independent of the small-scale dynamo, stellar magnetic fields can amplify a galaxy’s magnetic field when a star’s field is pushed out into the galaxy during a supernova explosion. The authors compare this process, fueled by the deaths of the first stars, to that of the small-scale dynamo.

In order to determine whether or not supernovae would be effective at distributing stellar magnetic fields in a galaxy, the authors examine how long 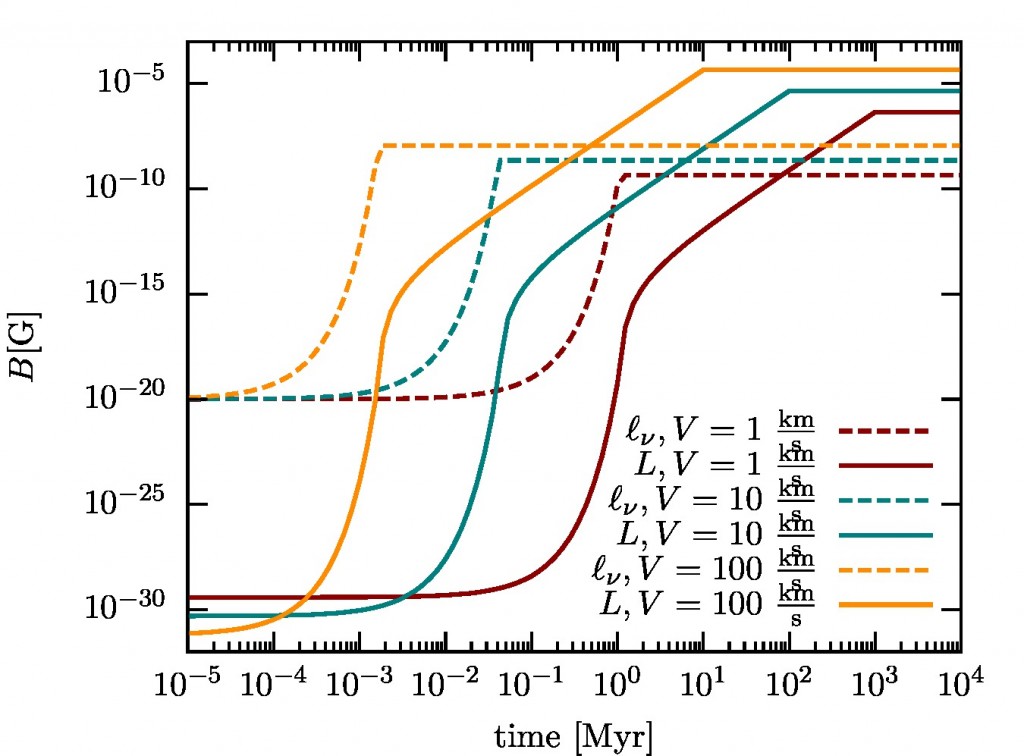 Figure 2: This plot depicts the evolution of the magnetic field through the small-scale dynamo as a function of time. The different colored lines indicate different kinetic energies of the turbulence within the plasma, red the lowest, and orange the highest. Source: Fig. 4, Schober et. al. 2013

this process would take in their simulated young galaxy. For an optimistic estimate of stellar magnetic fields (~104 G), they find it would take longer than the age of the Universe (~14 Gyr) for enough stellar magnetic fields to be distributed to reach 10-6 G in both their spherical and disk galaxies. They compare this process to the small-scale dynamo, showing that the latter is much more effective at amplifying fields. Fig. 2 depicts the growth of the magnetic field through the small-scale dynamo for various turbulence energies (denoted by the colors). As shown, the dynamo can amplify the initially weak field to current levels in much less time than the age of the Universe (about 104 Myr). Applying this to their galaxies with turbulence generated through gas accretion, they find the magnetic field reaches observed strengths in 270 Myr in the spherical galaxy, and 24 Myr in the disk galaxy. The supernova-driven turbulence operates even faster, taking only 15 Myr for the spherical galaxy and 3.8 Myr for the disk galaxy. In reality, it is most likely that both effects will be working together to amplify magnetic fields, so the real evolution may happen faster than the times listed. This is key, as these results predict that these two mechanisms are capable of amplifying the magnetic filed to present-day levels early in the Universe (at high redshifts), suggesting that galaxies have had their current field strengths for a long time.

Can this be observed?
Determining how magnetic fields evolved in galaxies through observation is challenging. Radio observations provide the best means of studying astrophysical magnetic fields, as the interactions between charged particles found in plasma and magnetic fields produces synchrotron radiation at radio wavelengths. The authors discuss a recent statistical study of Faraday rotation measurements (such as those that produced the magnetic field lines shown in Fig. 1) that is consistent with their results, suggesting constant field strengths out to z=5.3 (Hammond et al., 2012). However, nothing is conclusive yet. The upcoming Square Kilometer Array to be built in Africa and Australia is a shining example of the advancements made in astronomical instrumentation, radio astronomy, and international collaboration. Its construction will be completed in phases, initially becoming operational in 2019, and fully completed in 2024, potentially unlocking a new frontier in our understanding of astrophysical magnetic fields.