Say it with me: Once again, Astrobites is liveblogging AAS! In order to avoid inundating our readers’ RSS feeds, we’ll be updating this post with short paragraphs about the talks we’ve heard and posters we’ve seen. Keep checking back throughout Thursday.

Today is also the day we are presenting our poster. If you are at AAS, stop by poster 445.13 to talk to us. The poster contains our latest readership survey and other great information. 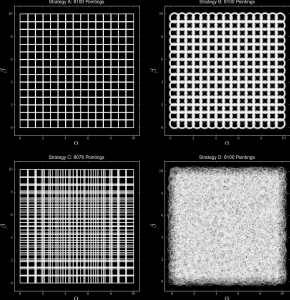 In this analysis of the optimal survey strategy for the Euclid project by Holmes & Hogg, the white outlines represent the borders of images to be taken on the sky. The random-like pattern (D) allows for much more successful self-calibration than the conventional strategy (A).

David Hogg’s plenary talk this morning sought to convince astronomers to be less organized in the way they take data! Actually, his point was sort of the opposite – if we really want to take advantage of all the photons our telescopes collect, we need to survey the sky in a less regular and more heterogeneous manner, and that can sometimes mean abandoning long-held conventions and convictions about experimental design.

For example, his and others’ work on self-calibration of astronomical surveys has shown that highly heterogeneous (almost random; see figure at right) survey strategies are the best way to actually cover the sky uniformly, and make overlapping measurements that are critical to understanding the performance of every aspect of your instrument and the astrophysical sources simultaneously. Moreover, if you design the survey well, he argued, the science data itself is more valuable for calibration than any conventional, dedicated, pre-survey calibration program could be.

David’s methods (many of which we have discussed before on Astrobites) rely on sophisticated computational techniques, heavy on Bayesian / probabilistic analysis. His fundamental point is that we need to build a “forward” or “generative” model for every question we want to answer in astronomy. For example, instead of just measuring the centroid of an object on an image, he would advocate, we should build a model for the position and surface brightness of the object on the sky and fit it along with a model for how the instrument responds to light (e.g. the point spread function and other calibration factors).

In this way, we can not only accurately measure the properties of objects on the sky, but understand our uncertainty in these properties and propagate that uncertainty through all our analyses. After all, “It is our duty,” he says, “to analyze our very limited data with optimal methods” if we want to justify spending taxpayer or foundation money on our research 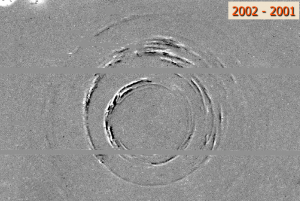 Light echoes, circular rings of ancient light from historical explosions scattering off dust, from SN 1987a as identified by Rest et al. in SuperMACHO data.

What happens to a star after it dies? Many leave their mark with a brief, but glorious, supernova explosion. Unfortunately, only one very nearby such explosion (SN 1987A) has gone off in the lifetime of any living astronomer, but we know that many more have occurred in our Galaxy and others nearby based on the stars’ much longer lived, nebulous remnants. Will we ever know what the explosions of those historical nearby supernova remnants looked like?

Rest specializes in bringing supernovae back from the dead, by studying the delayed light “echoes” from those ancient explosions after it cascades and scatters off nearby dust clouds. Rest has used massive imaging surveys like SuperMACHO to find these light echoes, emanating out from the central supernova remnant like ripples on a pond. We can even take spectra of these light echoes to make detailed classifications of these long lost supernovae and learn more about their long dead progenitor stars, and make 3D reconstructions of the dust sheets scattering their light.

More recently, Rest and collaborator Nathan Smith have studied light echoes from a new class of objects. Eta Car is the prototypical “supernova imposter” — it’s great eruption in the mid-19th century was bright enough to be dazzlingly visible to the naked eye, but the star lives on. By studying Eta Car’s light echo, they revealed new characteristics that challenge our understanding of that 19th century eruption. Rest concluded his talk by pointing out the full list of ~7 historical Milky Way supernovae for which we may study light echoes in the future, so look for more light echoes in the literature in the future. 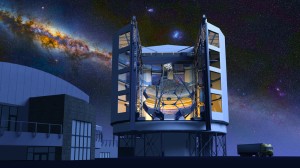 An artist’s conception of the Giant Magellan Telescope. The truck in the lower right looks tiny by comparison!

The Giant Magellan Telescope (GMT) is an extremely large ground-based telescope that will be built in Las Campanas, Chile. When completed, the GMT will have a collecting area of 380 square meters and an angular resolution ten times better than the Hubble.  As you can see in the artist’s conception at right, the primary mirror of the GMT will consist of seven 8.4-meter segments. Each of those segments is the same size as current top-of-the-line telescopes!

The GMT collaboration includes the Carnegie Institute for Science, Harvard, the Smithsonian, Texas A&M, the University of Arizona, the University of Chicago, the University of Texas at Austin, Australian National University, Astronomy Australia Limited, and the Korea Astronomy & Space Science Institute. The international partners are fully committed to cash contributions and the domestic partners have submitted commitment letters. In total, funding has been arranged for 85% of the total cost.

Natalie Gosnell (U. Wisconsin – Madison) presented a dissertation talk with exciting new results about an exotic class of stars known as blue stragglers. Blue stragglers are stars that have taken on additional mass at some point during their lives. Several formation mechanisms — Kozai-induced stellar mergers in triple systems, stellar collisions, and mass transfer from an evolved companion — have been suggested, but which one(s) actually operate(s) is still debated. Gosnell’s work follows directly on an earlier study from the Wisconsin group that suggested the presence of binary companions of approximately white dwarf mass in blue straggler systems in the open star cluster NGC 188 (see this astrobite). This lends support to the mass transfer mechanism, as such transfer occurs during the red giant phase, the evolutionary phase just prior to the white dwarf phase. Gosnell presented new Hubble Space Telescope observations of the NGC 188 blue stragglers. Three of these stars have significant ultraviolet emission only explainable by the presence of a white dwarf in the system. This is now direct evidence in support of mass transfer formation. Why didn’t they detect ultraviolet emission in all 15 or so blue stragglers? White dwarfs cool (and thus their emission becomes redder) over time, and thus evolution of the companion from red giant to white dwarf must have taken place within the last 500 million years or so for them to be detectable with these Hubble observations. In fact, exactly the expected number of blue stragglers had detectable white dwarf companions in this cluster, based on the cluster’s several Gyr age.

If you’re a dedicated astrobites reader, you might remember this recent post about the Crab Nebula, a supernova remnant. It’s well known that Chinese astronomers observed the supernova when it happened in 1054. But in the 1950’s, an anthropologist named Miller found two examples of rock art in the American southwest that he claimed as proof that people there saw the supernova event as well. The rock art he found depicted a crescent moon and star, and indeed the timing works out that the crab supernova would have been visible near a crescent moon at the best estimated date for the supernova event. Miller’s idea was widely accepted, and more examples were found throughout the following decades. But Krupp realized that the American Indians in the region tended to record cyclical events, not one-time events like comets or supernovae. Also, many of the examples found are probably too recent to depict an event from 1054 A.D. Further, the rock art also looks a lot like a conjunction of the moon and Venus, which is associated with a popular character from the local folklore, and would be expected to be depicted often in art. Indeed, the “star” in the moon/star petroglyph is often drawn with a face, cape, or weapons, further indicating that it represents Venus, and not the crab supernova.

Unfortunately, one of the sites, drawn in paint, was almost certainly too recent to be from a 1054 event, and additionally it looks like a different character from folklore. It turns out a head with one horn can look a lot like a crescent moon and circular star. Even if it were a moon and star, the moon is oriented incorrectly to depict where the supernova would have truly appeared in the sky. The other example is a true petroglyph, carved into the rock, but Miller’s photos from the original paper make it look like an isolated picture, when in fact the moon and star are just one part of a larger picture that does not seem to represent an actual astronomical event, but more likely symbols representative of stories or folklore.

The takeaway is certainly that no matter what the field, we should make sure we can reproduce findings independently, and we should carefully examine all our  sources carefully.

Well, that’s it for another AAS! Thanks for following us all week; we hope you enjoyed our live coverage both here and on twitter. We’re going to get caught up on sleep tomorrow and head back to our regular posting routine on Monday. Keep following along! Thanks again to everyone at the AAS for helping us set up our activities and providing us with press access, especially press officer Rick Fienberg. Thanks to all volunteers who hung out at our booth and poster, and thanks to you, dear reader, for following along and enjoying what we do!