A (Literal) Look Back in Time

Welcome back! Today, let’s ease ourselves into the post-AAS regular posting routine. While the arXiv is a Serious Website for serious articles, occasionally something lighter comes through the series of tubes connecting that site to my computer. This is particularly true on April Fools Day. Recent April Fools papers include “Non-detection of the Tooth Fairy at Optical Wavelengths” which rules out Tooth Fairies brighter than V=18.9 from one night of observations and “On the Ratio of Circumference to Diameter for the Largest Observable Circles: An Empirical Approach” which combined WMAP7, baryon acoustic oscillations, and Hubble Constant data to rule out π=3 at 5-sigma. 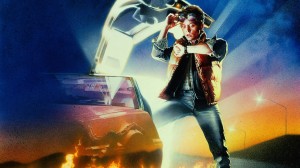 Cover Art from the 1985 Zemeckis/Gale documentary “Back to the Future,” one of the most popular studies of time travel.

Recently, another “lighter” paper came across the arXiv. The authors of this paper present “perhaps the the most comprehensive to date” search for time travelers. That’s not an easy task! There has been some previous work on the subject. In 2012, Stephen Hawking held a party for time travelers, only advertising it after the fact. Unfortunately for Dr. Hawking, no one showed up. In this paper, Nemiroff and Wilson turned to the internet for help.

The authors decided to search the internet for clues that someone may have had prescient knowledge of relatively current events. They probed for two terms that recently gained significance: Comet ISON and Pope Francis. They then attempted to search Twitter, Google, Bing, Facebook, and Google Plus for these terms and related forms (like #popefrancis). Google Plus and Bing weren’t very useful due to a lack of temporal search functions, but with the other three the authors found no tweets or posts suggestive of prescient knowledge of either the comet or the future pope before November, 2012.

The authors then searched the Astronomy Picture of the Day search archive for possible prescient knowledge of Comet ISON. (APOD was not searched for Pope Francis.) Before the discovery of the comet, there were actually a few searches for “ISON”! Unfortunately, each search was “related to extraneous information or misspellings.” Therefore, the authors conclude that none of these searches were prescient.

Finally, in September, 2013 Nemiroff and Wilson asked time travelers to go back in time and tweet with the hashtag #Icanchangethepast2 at any time between 2008 and August, 2013. They also gave the option of emailing said tag to the authors instead, if the time traveler preferred privacy. No emails or tweets were recorded. You might be thinking to yourself that this is obvious since time travelers can’t actually change the past! The authors were prepared for that, and also suggested time travelers who cannot change the past tweet/email with the tag #Icannotchangethepast2 in the past. Nemiroff and Wilson did not search for this phrase on Twitter before September, 2013, so that the past would not have to be changed for them to discover any tweets at that time. Again, no messages were recorded.

Nemiroff and Wilson conclude that they found no evidence for time travelers. Fortunately, the authors promise to continue the search! They end the paper by noting that the search may be in vain, as “time travelers may not want to be found, and may be good at covering their tracks.”

This paper, to me, has one major flaw: there are no statistics. From a set of nondetections, which the authors have, it should be possible to set an upper limit on the frequency of time travelers. Does this survey rule out the possibility that time travelers from the future are here right now? Or is it statistically likely that there are dozens of them that have evaded detection? Today, let’s leave that as an exercise for the reader. Turn in your work to the arXiv; the deadline is April 1st.