Circumstellar disks are made up of dust and gas orbiting a star. Younger, gas-filled protoplanetary disks are the birthplaces of planets, and older debris disks that have lost their gas can stick around long after the planet has formed. We still have a debris disk in the Solar System — we call it the Kuiper Belt. By studying disks, we can understand how planets form and even predict where planets might be based on the shape of the disk. But if you want to study disks, you need to find them first.

NASA’s Wide-Field Infrared Survey Explorer (WISE) telescope provided a great opportunity for spotting disks. WISE was launched in 2009 with the goal of taking infrared images of 99% of the sky. By the time it shut down in 2011, WISE had collected a huge dataset of infrared images of over half a billion objects at four infrared wavelengths. The dust and gas in disks are warmed by their star and emit light in the infrared, so disk hunters knew that there could be hundreds of previously undiscovered disks in the WISE data. 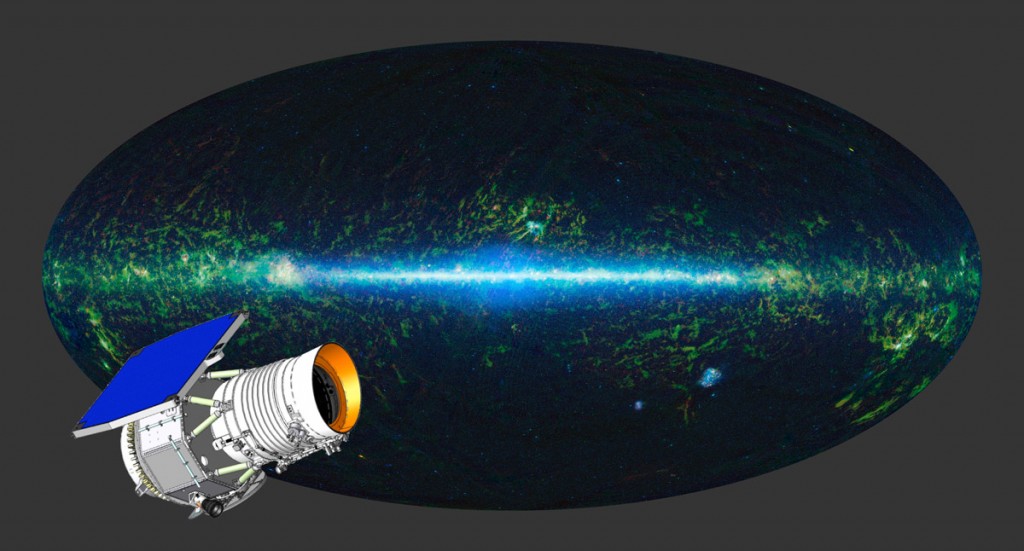 The full infrared map of the sky from WISE. The drawing on the lower left shows the WISE telescope.

The tough part was figuring out how to sort the circumstellar disks from all the other bright objects spotted by WISE, including comets, asteroids, galaxies, stars, and bright clumps of interstellar dust. Some objects could be rejected by computer algorithms (because they were too bright, or the wrong color, to be disks), but that still left a huge list of over half a million targets to sort through by shape. The low spatial resolution of WISE means that disks should show up as very round and compact objects (even edge-on disks!), while galaxies could look more elongated, and patches of dust would look large and extended. The astronomers working on the project found that they got more accurate results when they sorted the remaining targets by eye rather than trying to use a computer. But it would take much too long for the WISE science team to sort the objects themselves, especially since each object needs to be examined in multiple wavelengths (some objects, for example, look round and disk-like at infrared wavelengths but are clearly elongated galaxies at optical wavelengths).

Sound familiar? The astronomers sorting spiral and elliptical galaxies in the Sloan Digital Sky Survey (SDSS) ran into a similar problem — humans could do the job better than computer, but there was so much data to examine that it would take a small team of scientists months or years of solid work to do the job. So they started the Galaxy Zoo citizen science project, which asked volunteers to sort the images in their free time. The Galaxy Zoo team averaged together the classifications of multiple users for each image, which produced accurate classification results even though the users were untrained amateurs who had been given only a brief tutorial. Since then, the Galaxy Zoo team has added over a dozen other citizen science projects in astronomy, biology, and climate science to the Zooniverse website.

NASA astronomers searching for disks in the WISE data approached the Zooniverse team with a proposal for a new project to ask volunteers to identify disks based on images at multiple wavelengths. This proposal eventually became Disk Detective, Zooniverse’s newest citizen science project, which launched on January 30. For each object, users look at a flipbook of images from WISE and two previous optical and infrared all-sky surveys, the Second-Generation Digital Sky Survey (DSS2) and the Two Micron All Sky Survey (2MASS). If the object is round and stays at the center of the image at all wavelengths, the user marks it as a good disk candidate. But if the object is elongated or oddly shaped, or moves around at different wavelengths, the user indicates the problem and the object is flagged as a potential galaxy, dust clump, or other object. 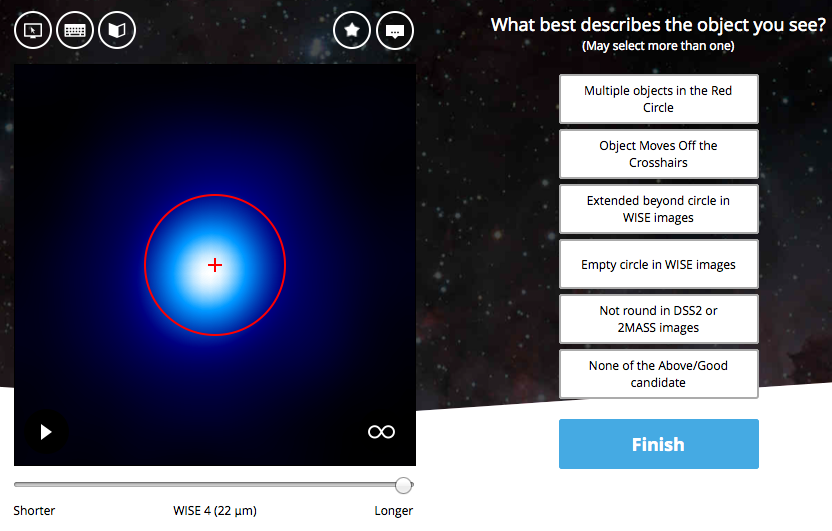 Screenshot of the Disk Detective website. The user flips through ten images of the object at different wavelengths, then select one or more options on the right.

Each of the 539,000 objects in Disk Detective will be examined by at least ten users. Once there have been enough classifications, the Disk Detective astronomers will examine the spectral energy distribution (SED) of each disk candidate and do follow-up observations to confirm which candidates are disks. The Disk Detective team expects that the users will find about 375 previously undiscovered disks! The final list of disks will be made public and will allow astronomers to study the statistics of the disk population. In particular, the WISE data will help us learn about disks around stars that have evolved off the main sequence, which have not been well-studied since astronomers looking for disks usually focus on main sequence stars.. Astronomers will also observe some of the nearby disks at high resolution (and maybe even spot planets!) with Hubble or the James Webb Space Telescope. None of this could be accomplished without the help of the citizen scientists on Zooniverse.

Want to give it a try? Just go to www.diskdetective.org and sign up!