X-ray binaries are stellar systems that are luminous in the x-ray portion of the spectrum. Matter from one star (typically on the Main Sequence) is transferred onto a more massive white dwarf, neutron star, or stellar-mass black hole. This accretion gives rise to the high x-ray luminosities because the infalling matter converts gravitational potential energy to kinetic energy, which is then radiated away as x-rays. Astronomers subdivide these systems into low-mass x-ray binaries (LMXB) and high-mass x-ray binaries (HMXB). This distinction depends on the mass of the star that is donating mass to the other component.

Occasionally these systems can begin to transfer relatively large amounts of mass, changing their mass transfer rate by up to a few orders of magnitude. However, they are typically found in a lower mass-transferring state referred to as quiescence. Since these systems appear to spend most of their time in these quiescent states, it is common to compare various systems using parameters determined when they were in this state.

The authors of today’s paper investigate the nature of one particular black hole LMXB, called Swift J1357.2-0933. They observed the source with the XMM-Newton satellite, which can observe between 0.1 and 15 keV. Concurrent observations were taken in the optical to confirm the source was in a quiescent state by comparing the magnitude to previously known values. 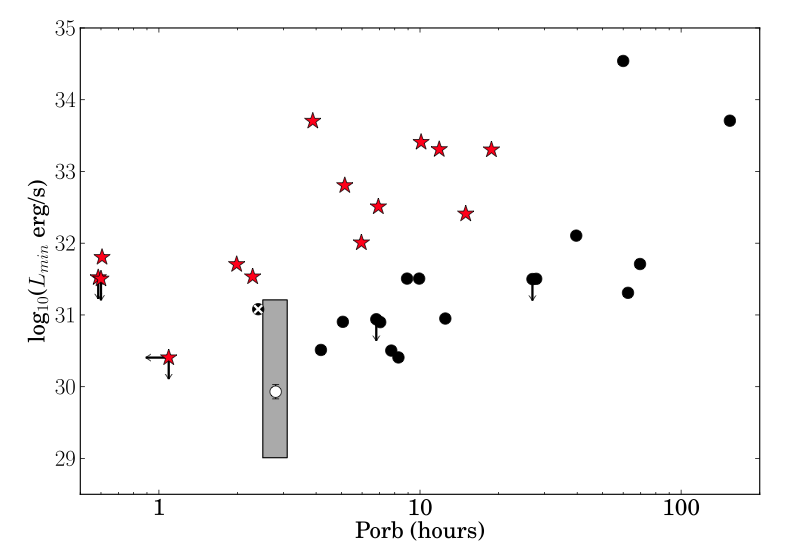 Figure 1: The x-ray luminosity plotted against the orbital period for neutron star (red stars) and black hole (black circles) x-ray binaries. The source studied in this paper is shown as the white circle. The grey box shows the orbital period and luminosity uncertainty given the uncertainty in the distance. The crossed black circle represents the only other currently known black hole binary around the theoretical switching point for the luminosity-period relation. (From Armas Padilla 2014)

A more precise distance will help constrain some theory about the behavior of BH binary sources. Binary sources will lose angular momentum due to gravitational radiation, causing the orbital period to decrease. It has been predicted that as the orbital period decreases, the luminosity would likewise decrease, but only down to a certain period, at which the luminosity would again increase. There are not yet enough known and measured BH binary sources to fully investigate this theoretical prediction. The object studied in this paper is around the period at which this luminosity is thought to switch. There is only one other black hole binary at a similar period, shown as the crossed black circle in Figure 1. Accurately determining the distance will allow a more accurate luminosity and feed into if or where this switch occurs.

This system has the potential to help provide an important constraint to our understanding of low-mass x-ray binaries and their evolution over time. The most important task to reach this potential is to more accurately determine the distance, which can be measured through obtaining more optical photometry and spectroscopy of the companion main sequence star.