We all know what to expect from the Kepler Space Telescope by now: a star appears to dim temporarily before returning to its original brightness, and this process repeats periodically. The phenomenon is explained by a planet passing in front of the star (“transiting”), blocking some of its light. This technique has been extremely successful, and Kepler has discovered 3,845 planet candidates to date.

But for one planet candidate, KOI-3278, things did not go according to plan. The star periodically dimmed as expected, but on closer inspection of the data the star appeared to periodically brighten as well. The brightening events occurred exactly halfway between subsequent episodes of dimming. What is going on here?

This situation is pretty unique. Although binary systems composed of main sequence stars plus a white dwarfs are not rare, it is rare for the magnification signal to be so strong. The magnification increases with increasing distance between the white dwarf and primary star. For KOI-3278, this distance is 0.46 AU (corresponding to an orbital period of 88 days). Typical separations for these binaries are much smaller, and for binaries with periods less than 16 days the magnification is weaker than the dimming, resulting in a normal-looking transit light curve. Furthermore, systems with large separations are inherently less likely to transit. Given that no telescope before Kepler had the ability to continuously monitor thousands of stars with very high sensitivity, it us unsurprising that this is the first time we’ve observed this phenomenon.

The authors model this system to match the observed light curve from Kepler, including the magnification and the occultation events (see Figure 1). From the measured magnification, the authors find the mass of the white dwarf to be 0.63 solar masses. They then derive its size to be 0.012 solar radii, using known relations between a white dwarf’s mass and radius. Finally, the authors use the depth of the occultation to measure the luminosity of the white dwarf. The luminosity depends on its size and temperature, so the authors determine its temperature to be 9960 Kelvin (the primary G star only has a temperature of 5570 Kelvin).  These properties are all consistent with what has been measured for other white dwarfs, which provides a good sanity-check that this system is interpreted correctly. 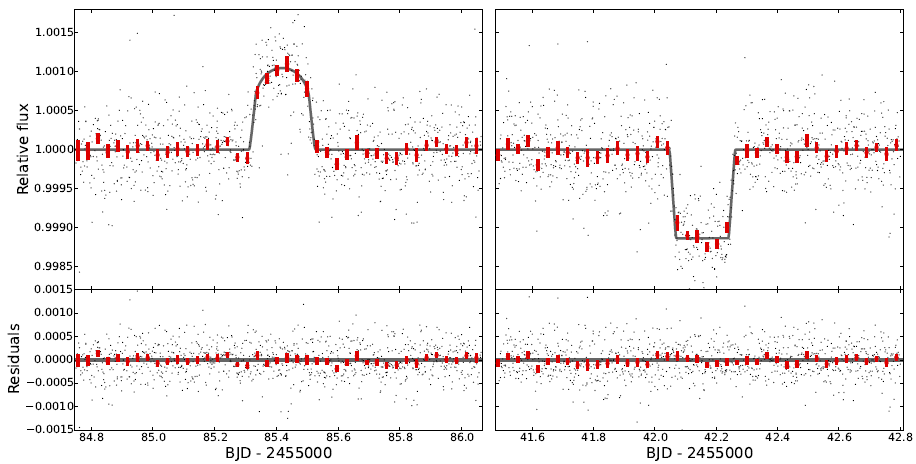 Next, the authors turn their attention to the age of the system. White dwarfs start out hot and cool over time, so the temperature of a white dwarf can be used to estimate its age. By this method, the authors find that the KOI-3278 white dwarf should be 660 Myr old. Adding to this the lifetime of the white dwarf’s progenitor star, estimated as 960 Myr, the authors deduce that the system is roughly 1.6 Gyr old. The age of the G star can be estimated independently from its measured rotation period, as stars are known to initially rotate quickly and slow down with age. This gives an age of 890 Myr. Because the two stars very likely formed together, these two age measurements are contradictory. The authors explain this discrepancy by noting that when the white dwarf progenitor star became a red giant at the end of its life, it likely transferred some of its mass onto its companion. This process would also cause the G star to spin-up, making it appear younger.

Future observations with other telescopes can reveal even more about this system. Measuring the Doppler wobble of the G star over time (as is done to find planets) will provide an independent estimate of the white dwarf’s mass. A spectrum of the G star could also reveal the presence of elements produced by the white dwarf’s progenitor and dumped onto the G star during the red giant phase.

Finally, obtaining the system’s light curve at UV wavelengths (Kepler is sensitive only to visible light) will give a better measurement of the white dwarf’s luminosity and temperature. The white dwarf, because it is much hotter than the G star, produces a large fraction of the UV light from this system, even though the white dwarf is much smaller. During the occultation, the system will dim considerably in the UV, producing a very strong signal.

Figure 2. An illustration of how the white dwarf would distort and magnify the light from the G dwarf it orbits. The authors use an image of the surface of the Sun for this illustration. A video showing the lensing effect during a transit can be found here.