If you want to make a room full of astronomers laugh, raise your hand after a talk and ask, “but what about magnetic fields?” For all their pervasiveness in astronomy—everything from planets to galaxies can be home to magnetic fields of varying shapes and strengths—relatively little is understood about magnetism in the cosmos. Consider, for example, the solar dynamo. (Dynamo is a fancy term for “thing that creates a magnetic field.”) We can all agree that the closest, best-studied star to Earth has complex magnetic fields which give rise to features like sunspots, but we do not understand the inner workings of our Sun’s dynamo.

While the Sun is an excellent starting point in a quest to understand magnetism, the authors of today’s paper want more. The Sun is but one star, and we know that other stars have dynamos. Properly characterizing stellar magnetic fields is important for exoplanet studies, among other things, because exoplanet observations are hugely affected by the presence of starspots. One way to measure stellar magnetic fields is with the Zeeman effect. Strong magnetic fields affect the spectra of stars, causing a single absorption feature to split into several components. However, this effect is most easily seen in hot stars, yet the cosmos is littered with cooler stars: G dwarfs like our Sun, and even more cooler-still K and M dwarfs.

Spectropolarimetry to the rescue

Today’s paper looks at something only relatively cool stars can have in their atmospheres: molecules. Specifically, the authors investigate how molecular absorption lines change in starspots as a function of magnetic field strength. This offers another advantage over the atomic Zeeman effect, because it measures the magnetic field only in starspots—definitive signatures of magnetism which are the only places certain molecules exist—instead of a “global” magnetic field that could result from several strong components canceling each other out.

The authors consider four molecules (MgH, TiO, CaH, and FeH) in three kinds of stars (G, K, and M dwarfs) that can be observed in three ways. One way is “regular” spectroscopy: measuring the strength of a molecular absorption feature. The other two ways use spectropolarimetry to measure the Stokes V and Q parameters.* Because different flavors of polarized light are sensitive to magnetic fields, astronomers can take advantage of this to observe how absorption lines change in the presence of magnetic fields. An example for an MgH absorption feature in K dwarf star is shown below. 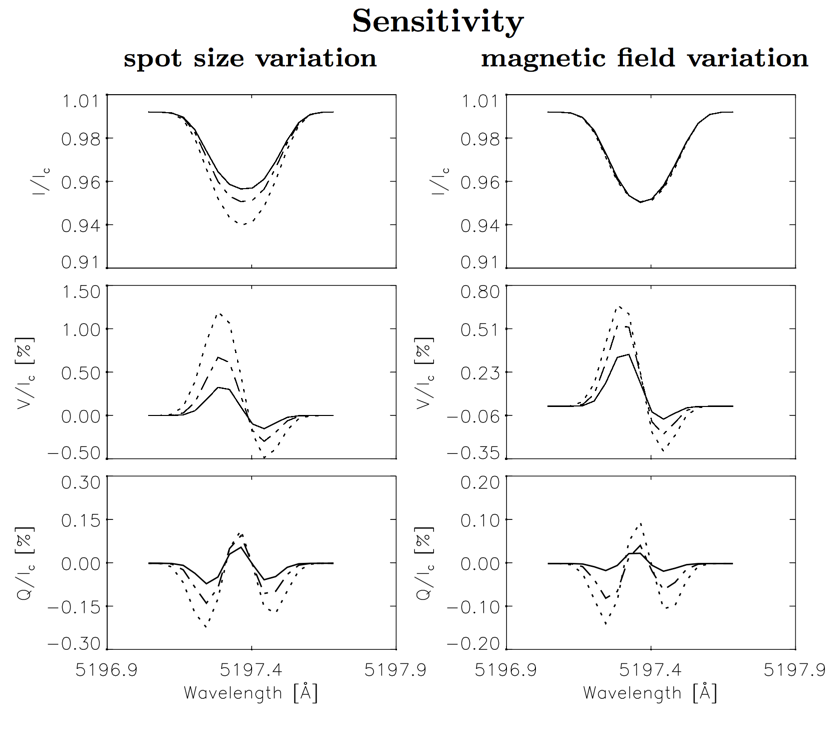 Magnetic starspots change how MgH absorption would look in a K dwarf star. The solid, dashed, and dotted lines show increasingly higher spot coverage in the left column and increasingly strong magnetic fields in the right column. The top panels are the absorption feature’s overall intensity, the middle panels are its Stokes V parameter (measuring circular polarization), and the bottom panels are its Stokes Q parameter (measuring linear polarization).

Of course, not all molecules, starspots, or magnetic fields are created equal. By modeling how different combinations of these would look on different kinds of stars, the authors make clear predictions to guide future observations. For example, are you most interested in Sun-like G dwarfs? Then you should probably focus on MgH and FeH absorption features. Or perhaps your instrument setup is better-suited to observing CaH and TiO. In that case, you might consider studying cooler M dwarfs and adjust your exposure times accordingly. The figure below summarizes the paper’s predictions for which Stokes V (circular polarization, left panel) or Q (linear polarization, right panel) signals are likely to show up for each molecule in a variety of cool, spotted stars.

Observers should find more signs of magnetic activity in some situations than others. Both Stokes V (left) and Stokes Q (right) signals are predicted to be strongest in CaH and TiO molecules for M dwarf stars, while MgH and FeH are a better bet for hotter G dwarfs.

These predictions pave the way for careful observations of magnetic starspots, because now observers can select targets and exposure times more efficiently. The Sun isn’t the only cool star in town with a detectable magnetic field, which brings us one step closer to unlocking the mysteries of stellar dynamos.

*Section 2.1.3 of this article introduces the Stokes parameters in a friendly astronomical context.