Drones are seriously awesome. They may be our next storm hunters. They make cool music videos. They can deliver pizza. Now, they’re helping us study the radio universe.

The authors of today’s paper use drones as an innovative way to calibrate radio dishes. To get a better understanding of this method, let’s review how radio dishes work. While optical telescopes use mirrors to focus light into an image, radio dishes collect radio waves into parabolic dishes. Radio antennas, even if they are “perfectly” manufactured, do not absorb radio waves in a uniform manner. Instead, the so-called radiation pattern of an antenna often takes the form of several lobes around the middle of the dish. A cartoon of such a pattern is shown in Figure 1. Every radio dish has its own unique radiation pattern due to its geometry and electronics. 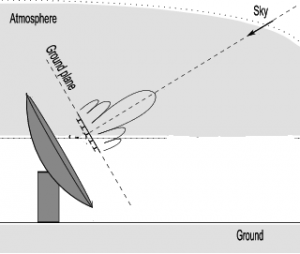 It is extremely important that we understand the radiation pattern of radio telescopes so that we will be able to deconvolve astronomical signals. This is especially important as radio telescopes become larger and their scientific missions require higher signal-to-noise. In particular, the authors are excited to apply their calibration technique to instruments which explore our universe through neutral hydrogen’s 21-centimeter emission line. These experiments will help us to measure our universe’s Baryon Acoustic Oscillation, which tells us about our cosmological history. In other words, our understanding of a manmade 5-meter telescope can hugely impact our insights about the cosmos.

Currently, we have a number of ways to measure the radiation pattern of antennas without drones. One of the most commons ways is using the Sun or other objects that are bright in the radio (like the supernova remnant Cassiopeia A). This is typically done by setting up the antenna at one location and letting the Sun drift across the sky throughout the day. Because we know where the Sun is as a function of time, it is easy to model the incoming light and expected antenna response. However, there is a downside. Our Sun 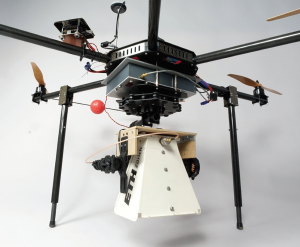 fluctuates in brightness with time, and we do not know exactly how bright it is at any given moment. Scientists have been getting around this problem by using man-made satellites with known radio signals which happen to orbit above the radio antennas. The downside to this method is that satellites are clearly not made for radio dish calibration and often do not emit signal at the most useful wavelengths. The authors of today’s paper aim for the best of both worlds: a man-made calibrator with a controllable and strong signal designed just for radio dishes.

To achieve their goal, they turn to drones. They trick out a hexacopter drone (shown in Figure 2) with a GPS,  barometric altimeter and noise transmitter. The GPS allows the team to know global coordinates of the drone to within a few meters, while the altimeter tells them the altitude within 10 centimeters! With this accuracy, they are able to fly the drone in a 75×75 meter grid pattern over the telescope to amazingly high accuracy, as seen in Figure 3. They then model this pattern and map the radiation pattern which is shown in Figure 4. The level of detail on this radiation pattern eclipses one made using the Sun as a calibrator, meaning that the drone method can lead to more detailed and reliable mapping.

Figure 3: Drone flight pattern design (left) versus the actual flight path (right). The black circle in the center of the left panel represents the radio dish.

So are drones the holy calibrator grail of radio astronomy? Not yet. Unfortunately, current commercially available drones are best used for smaller dishes (less than approximately 8 meters) because large dishes would require the drones to fly at higher altitudes. The authors argue that more sophisticated modelling could potentially solve this problem. Alternatively, we can just make awesome drones awesomer. 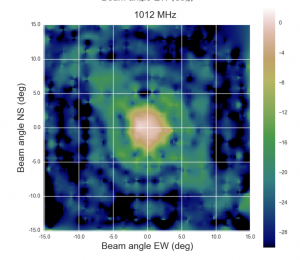 Figure 4: 2D radiation beam pattern of 5-meter radio dish at the Bleien Observatory. You can clearly see the main lobe and side lobes of the radiation pattern.