Asteroids have an important impact on us in several manners. Asteroid impacts can be fatally destructive, as most of the dinosaurs experienced, and as you may have realized after playing Atari’s late-70s mind-blowing audio-visual journey through space with the name – obviously – ‘asteroids‘. As an astronomer interested in planet formation, you do not purely consider asteroids as destructive, but also as an important piece in solving the puzzle of the origins of the solar system. The origins of the asteroid belt has to be explained together with two additional groups of orbiting bodies, namely the bodies of the second belt in the solar system, the so-called Kuiper belt objects (KBOs), and the planets, of course. The idea is that rocky bodies of the solar system (for instance asteroids or KBOs) grew ground-up with small bodies sticking together to form ever larger and larger bodies. Considering that giant planets also consist of a solid rocky core the authors of today’s paper investigate whether all of the solid bodies could have formed through a mechanism called chondrule accretion. Chondrules, which are millimeter-size, spherical particles that are ubiquitous in the solar system. We know that because they have been found in pieces of meteorites originating from different distances that have fallen on Earth. Since chondrules are located everywhere in the solar system, the idea that different bodies formed from the same material and through the same mechanism is encouraging. 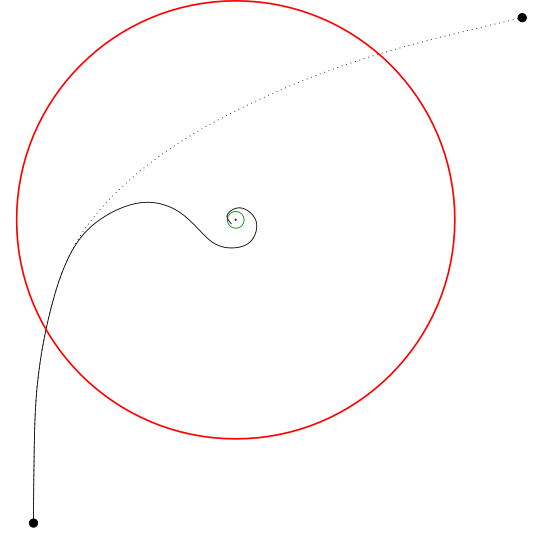 Illustration of chondrule formation: The chondrule (black dot) spirals toward the growing rocky body (the “seed”) at the center due to a combination of gravitational attraction and gas friction. The dotted line illustrates the scenario without gas, where the chondrule would have only been deflected. (The image is adopted from a lecture of the first author. You find the link to the lecture here.)

The fact that rocky bodies are found in orbits with similar inclinations can be best explained that during and after star formation a circumstellar disk consisting of gas and some dust (called protoplanetary disk) forms around the star as a consequence of angular momentum conservation. Accretion describes the effect of small particles growing into larger objects – in our case to bodies within a range of one to about a thousand kilometers in size. The small particles (pebbles) needed for that are the chondrules present in the protoplanetary disk. The authors assume that at the early stage of the disk, a sea of chondrules exists inside of it together with a few slightly heavier particles among them. The authors do not investigate how these “heavy seeds” have formed, but they suggest that it could be due to an instability, such as the streaming instability, which has been previously studied by the lead author. (The streaming instability can be heuristically compared to a bicycle race, where riders form a clump in the peloton to be shielded from the wind.) The larger seeds are higher in mass and therefore attract the surrounding chondrules gravitationally if the chondrules come close enough. Furthermore, the particles are slowed down due to gas friction (refer to this Astrobite for a classical analysis of the importance of gas drag). If the chondrule’s velocity is small such that it cannot escape the seed’s gravitational field – astrophysically speaking, the chondrule cannot leave the Hill sphere of the seed – it spirals inwards toward the seed (see figure). As a consequence, the seed becomes even more massive, thus attracting chondrules at larger distances. Eventually, this can lead to a run-away process of rapid growth for high enough masses if there is a sufficient supply of chondrules.

The authors find that chondrule accretion can form rocky objects (planetary embryos) up to Mars size on time scales of a few to several million years in orbital shells at radial distances of approximately one to a few times the distance between Earth and Sun. At larger distances, the accretion times increase because of the lower amount of chondrules out there. The authors find that at distances outside of 25 AU, the time it would take to form a kilometer-size body through chondrule accretion would be larger than the age of  the solar system. Since we do not believe that our measurements of the age of the solar system are substantially different, formation of large objects through chondrule formation cannot be the explanation further away from the Sun. This could mean that objects further out are instead formed through another (modified) mechanism or that they originate from smaller objects and migrated out at later times. According to the authors, chondrule accretion is a valid mechanism for the significant growth of bodies up to a few thousand kilometers in radius. For bodies larger than a kilometer, the importance of impacts as a contributor to the mass growth of solid bodies increases, which is why the authors conclude: Asteroid formation happens predominantly by chondrule accretion. However, the formation of terrestrial planets and rocky planetary cores of gas giants grow through a combination of chondrule accretion and mass growth through collisions with much smaller bodies that add mass to the bigger more massive object.

Disclosure: The last author on this article (M. Bizzarro) is the head of the research center (StarPlan) that I belong to. However, he is neither my supervisor, nor was I involved in the study.