The Kepler mission has become so important that it can compete in reputation with the founder of the laws of planetary motion! This astrobite has to do with both Keplers: it considers planetary motions as well as the findings from the Kepler satellite. (If you want to know more about the Kepler mission, you can find way more astrobites articles than I can list here; just search for “Kepler” on our site and your curiosity will be satisfied.) Kepler data indicates that planets of 1 to 10 Earth radii with orbital periods of less than 100 days are very common in the Milky Way. (For a nice back of the envelope estimate, please watch this talk by Eugene Chiang from minute 9:30 to minute 12.) There are different names used for this size range of planets such as super-Earths, mini-Neptunes and gas dwarfs — it’s an antonym to gas giants. I prefer the term gas dwarfs because it implies the main difference between the two: gas dwarfs have small gas atmospheres, while gas giants have large gas atmosphere. Classical models of planet formation were designed to explain one particular system, namely the solar system.However, the solar system appears to be unusual– it lacks lacks a gas dwarf and our innermost planet, Mercury, whose 88-day orbital period is similar to that of gas dwarfs, but is significantly less massive. As of this writing, there are two main scenarios for the explanation for the observed exoplanetary systems: 1) formation of planets at larger orbits and migration to smaller orbits later in their evolution, and 2) formation of planets at small distances, so called in situ formation. 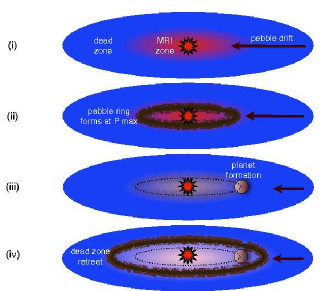 Figure 1: Illustration of the different phases of inside-out planet formation. (i) The gas slows down the pebbles. (ii) The pebbles are trapped at the pressure bump. (iii) The pebbles accumulate and form a planet that clears up its orbit. (iv) New pebbles drift until they are stopped by the light of the sun and form another planet.

The authors of today’s paper are fans of the latter explanation and they extend the idea by predicting that planets form inside-out. To better understand their idea, you need to know that planets form in disks of gas around the star, so called protoplanetary disks (and look at the figure above, which is figure 1 in the paper). These disks form as a consequence of infall of gas towards the young star and angular momentum conservation. First, the gas in the disk will move radially inwards towards the stars. (Since this region is supposed to be free of turbulence, astronomers refer to it as the dead zone). The more the gas approaches the star, the higher the temperatures are. As a consequence, the gas heats up and ionizes at a distance close to the star. As you might remember from electrodynamics, moving charges induce a magnetic field. The authors propose that such a magnetic field can yield to an instability, the so called magneto rotational instability (MRI), which can cause a local increase in pressure — a pressure bump. Okay, so far so good, but now comes the clincher. The disk does not only consist of gas, but also of dust grains, so called pebbles. So what do these pebbles do? Well, the gas slows down the pebbles (think aerodynamic drag), but once the pebbles reach the orbit of enhanced pressure, they cannot drift any further. The pebbles accumulate here and eventually form a planet that also sweeps up the available gas at this orbit.

Great! We have one planet, potentially a gas dwarf, but how can further planets form? A planet’s orbit is usually pretty empty, since the planet accreted the gas and dust surrounding it and you might assume that material falls into this empty region. However, this is not the case. Less light is absorbed in the empty planet-induced gap, which allows light from the star to push the gas and dust back. New pebbles accumulate at the distance, where the light of the star prevents them from falling in. In this way, another planet can form outside of the inner one, through accumulating dust and sweeping up gas. Since this planet causes another gap, yet another planet can form further out and generally, several planets can form in this sequence as long as enough gas and pebbles are available.

Not the final answer yet

To summarize, the planets form in a sequence — the first planet forms close to the star and the next planets form further out as the previous one. Hence the name: inside-out planet formation. Now you may think: “Wow! Does that mean that the riddle of planet formation is finally solved and researchers working in planet formation have to look for other jobs?” The short answer is: “No.” Clearly, the general idea of the authors is very nice and appealing, but the model is also based on a simplified version of the protoplanetary disk. For instance, it is not clear

In fact, the first point is not necessarily required, since other physical processes may be able to build up a pressure bump, too. Altogether, the authors’ inside-out model is a nice alternative to classical planet formation scenarios assuming migration. It will be exciting to see which model requires less fine-tuning.