Supermassive black holes (SMBHs) are at the centers of all large galaxies, having masses of millions to billions times that of the Sun.  They are everywhere, intimately connected to their host galaxies.  They diet on stars, they get kicked out of their host galaxies, they may even merge with one another.  However, we still do not understand how they form.

SMBHs are observed as highly luminous sources known as quasars less than one billion years after the Big Bang.  Let’s do the math: in order to make a one billion solar masses black hole in one billion years, it has to gain one solar mass per year.  This is an insanely huge, unsustainable feeding rate!  For a SMBH with 4 million solar masses (like the one in our own Milky Way Galaxy), a feeding rate above ~0.01 solar mass per year would already lead to strong heating of the gas as they spiral into the black hole.  The radiation from the hot gas would be so intense that it may stop the gas from further falling in.  The key to SMBH formation therefore lies in understanding how so much mass can be packed in such a short time.

Supermassive stars (SMSs) are the foundation of the so called direct collapse model of SMBH formation.  In this picture, a SMS with mass 100,000 times the mass of the Sun collapses to form a massive seed black hole (or not), and then further grows by swallowing surrounding gas.  Such a massive seed gives the black hole growth a head start, making it possible to gain enough mass with lower, physically sustainable rates.  The question then becomes: how does a SMS come to be in the first place?

We have a similar worry: will the hot radiation from a growing star kill off the gas supply before it gathers enough mass to be a SMS?  We talked about such worry when making massive stars in an earlier bite.  Two processes are at work here: the supply of fresh gas (accretion) and the settling of gas onto the surface of the growing star (Kelvin-Helmholz contraction).  If time is allowed for the gas to settle down, the star will contract and become hotter.  The intense radiation from the hot star may then be able to blow away the surrounding gas.  The authors predict that if we feed the star at a rate faster than a threshold of ~0.04 solar mass per year, the fresh gas cannot settle in time but piles up on the surface.  The surface of the star then expands as it gains mass (the ‘supergiant protostar’ phase).  The expansion results in a near-constant low surface temperature (of ~5000 K), so the stellar radiation would not be too strong.  Seems like we have a working scheme to build a SMS! 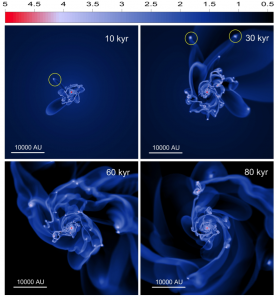 Figure 1. Snapshots of gas surface density at different times of the disc evolution (in unit of g cm^-2). The growing massive star is represented by the red dot in the center of each image. The yellow circles indicate the fragments that are swung out of the system due to gravitational interactions.

The same research group extends on this idea in today’s paper and asks the question: is this SMS-growing scheme realistic?  The authors address this question by considering an isolated massive star-forming gas cloud (SMSs may also be formed by smashing galaxies together).  Using numerical simulation, they follow the collapse of a massive gas cloud into a small star surrounded by a large gas disc, and observe how fast the gas from the disc feeds onto the central star.

Figure 1 shows the snapshots of gas surface density at different times of the simulation.  The highly clumpy and filamentary gas density is clearly visible in all stages due to gravitational instability, the same phenomenon that may lead to formation of planets around a star.  The gas clumps and arcs are highly dynamical, continuously being created, destroyed, or falling onto the star. 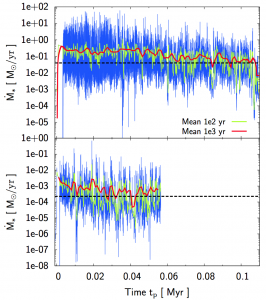 Figure 2. The gas feeding histories onto the star in the clumpy disc system. The bottom panel shows the same star-forming setup, but with the gas replaced by metal-free gas from which the first generation of stars form. The green and red lines denote the time-averaged rate with averaging windows of 100 and 1000 years, respectively. In both panels, the black dashed line indicates the threshold feeding rates.

To see if a SMS can really grow from this clumpy disc system, let’s look at how fast the gas is falling onto the star.  The top blue plot in Figure 2 shows the time evolution of the star’s feeding rate, with the threshold rate marked by the black dashed line.  We see that the rate varies drastically and crosses the threshold very frequently, while the time-averaged feeding rates represented by the red and the green lines are mostly above the threshold.

Could we trust the time-averaged rates?  Does the star contract and terminate its growth when the feeding rate falls below the threshold?  By inputting the feeding rate (top blue curve) into a detailed stellar evolution code, the authors confirmed that the stellar surface actually expands monotonically, remaining cool despite the frequent drops below the threshold.  This suggests such a star-disc system could indeed be where SMSs form.  For more news about supermassive stars, stay tuned!

Flying Free: A Supermassive Black Hole Kicked Out Of Its Galaxy