Classifying Civilisations: An Introduction to the Kardashev Scale 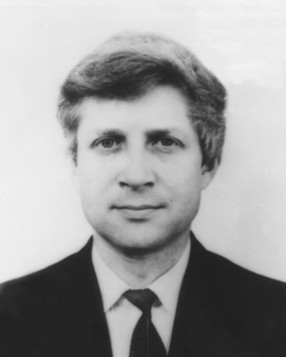 Nikolai Semenovich Kardashev in the 1960s

Theorising about extraterrestrials is hard. Since we only have one data point, our own little civilisation on our own little Earth, trying to pin down what extraterrestrial civilisations will look or behave like stretches the imagination, to put it mildly. But there is one commodity that most theorists agree any advanced civilisation will need in large quantities, and that’s energy. Just over 50 years ago, a Russian astrophysicist named Nikolai Semenovich Kardashev proposed a scale for ranking these hypothetical civilisations based on their energy consumption. The Kardashev scale was intended to help direct searches for signals from intelligent beings. Over the past few decades huge effort has gone in to detecting such signals, some of which have been written about here on Astrobites (see here, here, here, and here). So anything that helps us narrow the search, or understand the target better, is certainly welcome. But the scale is more than just a practical tool. Since its inception it has led to hypothetical new energy consumption mechanisms, inspired generations of science fiction writers, and influenced thinking around our own future energy consumption.

The scale has three types that follow the scale of astrophysical structures in our local universe. A Type I civilisation has complete control over the energy of its host planet. It would, for example, be capable of collecting all the starlight that falls on the planet. Other than coating the surface completely with solar panels, collecting such vast amounts of starlight could be achieved using solar power satellites, transmitting the energy to the surface wirelessly. Power from fusion reactions on an industrial scale could also be used to produce similar amounts of energy over geological timescales.

Type II civilisations have control over the energy of their entire host stars. The engineering challenge of achieving this would be huge, but conceivable structures have been proposed. One of the most famous is the Dyson Sphere, which encompasses an entire star and captures all or the majority of its energy output. A candidate for such a system has been proposed recently, the snappily named KIC 8462852. It’s light has been changing erratically in ways hard to explain through our current understanding of the physics of stars. But is it a Dyson Sphere? It’s a controversial claim, and certainly not one that will be confirmed any time soon until further, detailed observations can be made.

Type III civilisations completely blow the first two away, being capable of controlling the energy of an entire galaxy. This could be achieved using a whole population of Dyson spheres around all the stars in a galaxy, or by tapping the energy of the Black Hole at the center of the galaxy. Controlling energy on this scale would require unimaginable feats of engineering, as well as interstellar transportation mechanisms far beyond human capabilities today. 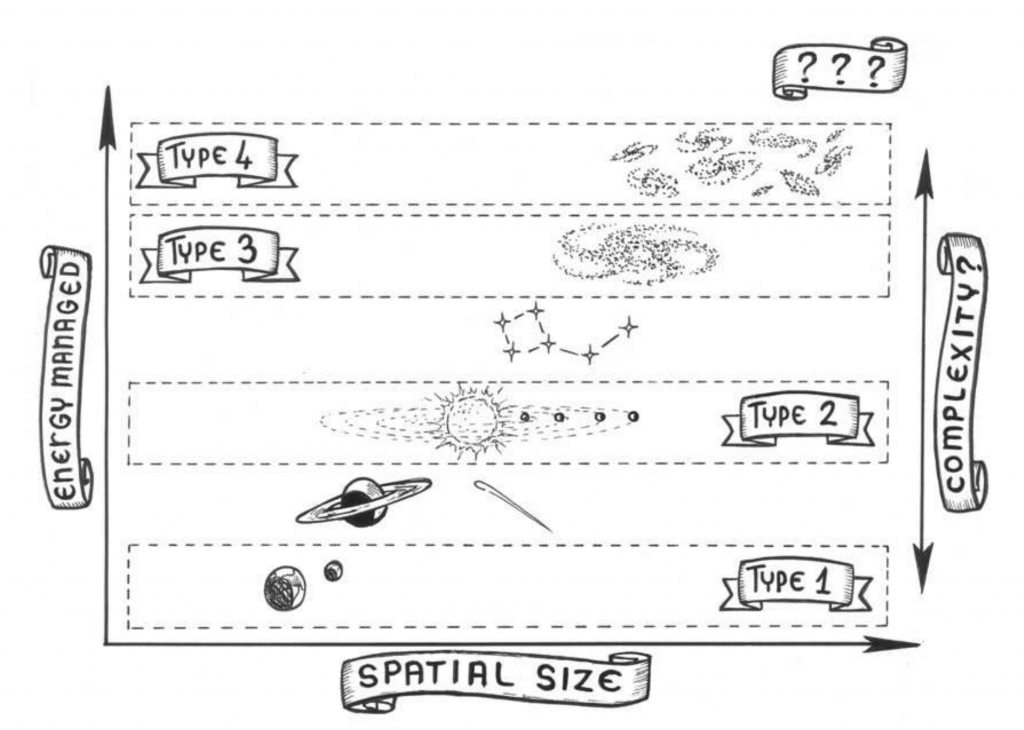 Cartoon showing the different Kardashev types. Each rung on the ladder uses larger astrophysical objects as its energy source, from single planets to whole clusters of galaxies. Source: Cirkovic 2015, Kardashev’s Classification at 50+: A Fine Vehicle with Room for Improvement

Puny Earthlings
Where does our own civilisation sit on this scale? Kardashev initially proposed that humanity was close to a Type I, but subsequent reclassifications have taken a more self-critical view. Carl Sagan’s modified Kardashev scale, which allows for continuous values, put humanity at a meagre 0.7. Some predict that our total power consumption could hit Type I levels on Sagan’s scale in around 200 years, but we are still incredibly far from realising Type II or III status.

Practical applications
Kardashev’s motivation for coming up with the scale was that if we can understand how advanced civilisations source their energy, we can look for clues that they are harvesting or using it in our observations of stars and galaxies. In fact, his scale provides a crude way of quantifying the detectability of a technological civilisation. Type III civilisations would hypothetically have a huge impact on their host galaxies, and be clearly identifiable due to their interactions with galactic objects such as stars and black holes. More speculatively, the transportation and communication mechanisms such a civilisation might use between these bodies could also be detectable. Recent searches found no evidence that such a civilisation exists in any galaxies in the local universe, though. For Type I and II detectability is harder, but any Dyson spheres out there could be observable. They would absorb and reemit their host stars light, changing the observed spectrum.

Are we alone(r)?
Alternatives and extensions to the scale have been proposed. Type IV civilisations can control the energy of clusters of galaxies, or even the entire universe in some definitions. Such propositions can feel a touch ridiculous, and the scale has been criticised for being too speculative. If we cannot understand advanced civilisations, then surely it is impossible to predict their behaviour? Whilst this is arguably true, what is beyond doubt is the profound impact of such thinking on how we view our own civilisation and the means of powering it. Even if we are alone in the universe, the Kardashev scale has influenced the dialogue surrounding our own civilisations source of energy in the future. If we can avoid destroying our own planet through global warming, or ourselves through nuclear war, how will we power ourselves in to the vast and exciting future?