Weighing yourself or anything on earth really, is a simple matter of getting on a scale and recording down the numbers. Not so for astronomical objects, especially black holes (check out this delightful PhD Comics strip for black hole 101). Black holes play hard to get by stealing away precious photons that reach us. However, the motion of objects around a black hole such as stars and gases give away its presence and allows us to directly measure its mass. This method of mass measurement is called the dynamical mass estimate, i.e. it is based on the dynamic movement of the surrounding bodies. Because our telescopes, even in space, cannot peer infinitely far away, we can only dynamically measure the masses of a small number of nearby black holes. This small sample is extremely powerful. From it we discovered that black hole mass correlates tightly with properties of its host galaxy, such as bulge mass, stellar mass, and luminosity; the most well-known is perhaps the Mbh- σ relation, where σ is the velocity dispersion of bodies in the galaxy bulge.  In other words, black holes conspire to co-evolve with their host galaxies, through some mechanisms we still don’t understand. These Mbh-(insert galaxy property here) relations are collectively known as black hole scaling relations. And they are pretty important: indirect black hole mass estimates and black hole abundance and evolution studies are anchored on these scaling relations. For instance, they bear imprints of the masses of high-redshift quasars and the type of mergers experienced by the black hole host galaxies.

But, what if these black hole scaling relations are not as correct as we think they are?

Recently it’s been observed that the distribution of properties such as velocity dispersion, half-light radius, and luminosity of galaxies with dynamical black hole mass estimates (let’s call these galaxies “BH hosts” from now on) are different from that of the whole galaxy population. In figure 1, the authors compared velocity dispersion vs. stellar mass of the most recent BH hosts sample with that of SDSS galaxies and showed that BH hosts tend to have larger velocity dispersions; they lie significantly above the relation defined by SDSS galaxies in the gray band. Is this offset physical, or is it a selection effect? 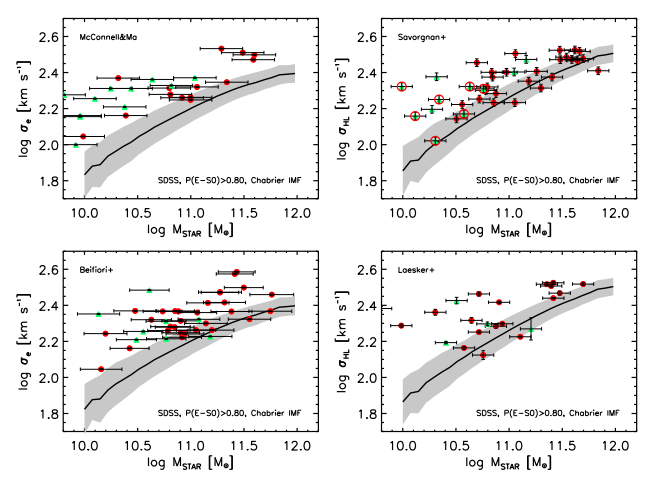 Fig 1 – Velocity dispersion vs. total stellar mass of galaxies. Each of the four panel compares different samples of BH hosts (colored points) with SDSS galaxies.The solid line and gray band are the mean and uncertainty around the mean for SDSS galaxies. In all panels, BH hosts lie above the relations defined by SDSS galaxies. [Figure 1 in the paper]

The so-called selection effect comes about because we can only dynamically measure a black hole mass if its sphere of influence is resolved, which depends on the resolution of a telescope. Therefore, the selection effect is the result of picking only those galaxies whose spheres of influence are resolved and ignoring everything else. If the offset in figure 1 is physical, this compromises our long-held lore that all galaxies host black holes; if it is a selection effect, this implies BH hosts sample is a biased subsample and that scaling relations strewn across the literature are biased as well. So pick your poison?

The authors showed that BH hosts samples in the literature are biased from selection effect. They simulated the distribution of BH hosts masses according to three different models which relate black hole masses with velocity dispersion σ, stellar mass Mstar, and radius of their host galaxies (equation 4 and 5 from the paper). Using the velocity dispersion distribution of the unbiased SDSS galaxies and stellar mass distribution from an earlier work, the authors built up a full unbiased BH host sample. Their biased subsample consists of BH hosts that satisfy a resolution cut. They then compared how black hole scaling relations look like for the unbiased, biased, and observed samples, shown in figure 2. The biased sample from simulation (black line) on the top panel fits remarkably well to data (blue points): selection effect is found to bias the observed Mbh-σ relations above the intrinsic ones by overestimating black hole masses by a factor of three. Worse still, the observed Mbh-Mstar relation is ~50-100 larger than the unbiased/intrinsic one. By studying the correlation between outliers from various scaling relations, the authors also concluded that black hole mass depends more strongly on σ than Mstar, suggesting that the Mbh-σ relation is the more important, if not the fundamental, relation. 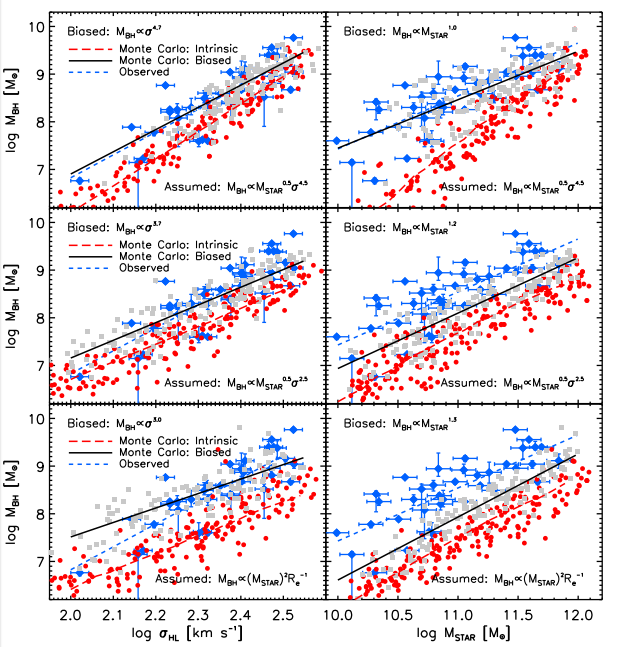 No Just Some Simple Relations

Lower normalizations for the Mbh-σ and Mbh-Mstar relations can affect our understanding of black hole-galaxy co-evolution. For one, they reconcile the differences between mass measurements from BH hosts and non-dynamical mass estimates made from active galaxy samples. The intrinsic Mbh-σ relation with lower normalization implies lower black hole mass density in the local Universe and constrains black hole accretion models. Furthermore, interpreting outliers in the Mbh-Mstar relation as indicators of galactic structures such as bars needs to take into account selection effects, else it would be misleading. Since the Mbh-Mstar relation is more biased and secondary compared to the Mbh-σ relation, black hole growth models based on that relation should be interpreted with caution, especially when selection effect isn’t removed.

This paper demonstrates one of many cases where selection effect gives rise to misleading results. Astronomers battle with extreme objects — very faint, very far, very old, very low energy, very not-detectable etc — every day. So one really needs to think carefully about how to best select the most representative sample to study and to keep in mind all the selection effects that can come into play, in spite of that.

In the heart of a trainwreck galaxy: potential for future gravitational waves