Title: A map of the large day-night temperature gradient of a super-Earth exoplanet

There is a scene from Toy Story where Buzz gets stuck in the toy machine with a bunch of green little aliens. When the aliens see the claw from the toy dispenser appear they all stare up at it and gasp “The Claw!!!!” When it comes to super-Earths, exoplanet scientists are the little green aliens gasping in amazement, confusion and admiration at some very confusing and unidentifiable object up above. This is why the subject of today’s astrobite, 55 Cancri e, has already been the subject of six other bites! And even though there have been previous observation of this exoplanet, just like the claw, we still do not have a clear handle on what exactly it is. 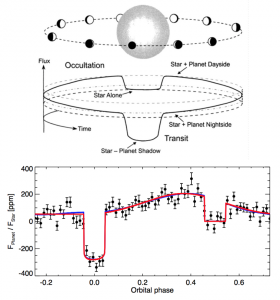 using the 4.5 micron channel of the Spitzer Space Telescope Infrared Array Camera. During those 75 hours of observation the brightness of the planet-star system was continuously monitored. As the picture to the right shows, when the planet orbits around its parent star we get a glimpse of it at several different phases. This technique, aptly called phase curves, results in longitudinal mapping of the planet’s temperature.

With these observations they were able to gain insights into how heat is distributed from the dayside of the planet to the night side (seen in Figure 2 below), which is interesting because this planet is tidally locked. Tidally locked planets always have the same side facing their parent star. Intuitively, you might imagine that the hottest point on a tidally locked planet would be at the direct center of the dayside of the planet, called the substellar point.  The authors find that the hot spot is actually located 41 degrees east of this point. Additionally, they find that the temperature of the dayside is 2697 K, while the temperature of the nightside is only 1379 K. This is equivalent to you  having a perfect 70 degree F day somewhere in the United States but your colleague on the other side of the world sweltering at 2,441 degree F. 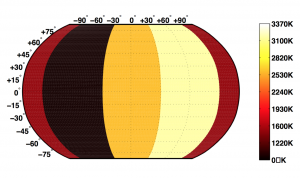 Figure 2. The longitudinal heat map of 55 Cnc e, showing large dayside-nightside temperature differences. This indicates no atmospheric circulation on this planet. Also note the hottest region is about 40 degrees east of the substellar point.

The observations of 55 Cnc e suggest the radiative timescale is much smaller than the advective timescale. This is puzzling because atmospheric models of this planet’s size, mass, and temperature suggest the opposite should be true due to a lack of hydrogen. One possible explanation for a small radiative timescale is that 55 Cnc e has an atmosphere with a high-mean molecular weight (lot’s of water or carbon dioxide). But, at 4.5 microns (the location of the observation), water and carbon dioxide are both absorbing radiation. This means that the atmosphere becomes optically thick higher up in elevation and the observer ends up seeing the cooler upper region of the atmosphere. If water and carbon dioxide were absent, we’d be free to see down to the hotter surface of the planet. Alternatively, 55 Cnc e could just be completely devoid of an atmosphere all together.

To make matters worse, I said previously that the hot spot was located 41 degrees east of the substellar point. But, if heat is not being transported to the night side, how then is the hottest point of the planet off axis? This requires transport of heat! One potential explanation for this is there is lava flowing at the surface of the planet. Molten lava on a planet this hot would flow on the surface like water down a stream.

Now it’s that time where I have to tell the reader that there is still no definitive explanation for what is going on in the atmosphere of this planet. But this is actually the best part. All of this incredible work has been done with a spacecraft that was proposed before we even knew exoplanets existed. Spitzer (and Hubble) were not designed to characterize exoplanet atmospheres and yet so many interesting observations, ideas and theories have come out of these two missions. We are creating a solid foundation of astrophysical questions that need to be addressed with the launching/building of the next generation of space and ground based telescopes. The community has a lot to look forward to. A lot of interesting science lies just beyond the horizon.