Supernovae are important for the existence of life on Earth. They account for the production of elements heavier than oxygen. In numerous previous astrobites, you may have heard about effects that can be caused by supernovae and their different types. Historically, astronomers distinguish between two main types of supernovae according to features observed in the spectrum of light (spectra) that they emit: spectra that do not show any hydrogen absorption lines are defined as type I and spectra that show hydrogen absorption lines are defined as type II. Among these types, supernovae show further characteristics in their spectra indicated by an additional letter. For example, supernovae that show no evidence for hydrogen and silicon, but do have a strong helium line, are labeled as type Ib.

Additionally, astronomers also follow the evolution of the ejected mass after the explosion of a supernova. In this way, astronomers can put a label on all supernovae. Well, not entirely… One small number of indomitable supernovae still hold out against receiving an adequate label. Although they first resemble the spectra of type Ib, the evolution of the material that is ejected during the explosion evolves differently. The ejected material quickly evolves into a nebula that shows strong signs of Calcium abundance in its spectra, but not of any other heavier elements. Furthermore, these supernovae are less luminous than seen for other types, and, last but not least, they are located very far away from  potential stellar host systems. This last observation in particular makes Calcium-rich (Ca-rich) supernovae particularly interesting objects to investigate.

Additional observations as constraints for the formation of Ca-rich supernovae

First of all the authors expand the available data for Ca-rich supernovae by observing five additional objects within a distance of 100 Mpc with the Hubble space telescope.  Two (SN 2001co and SN 2003dg) are located along the line of sight of the disks of two late type galaxies, while the remaining three (SN 2003dr, SN 2005E and SN 2007ke) are isolated. The authors refer to the three latter ones as remote examples because they resemble previously observed isolated Ca-rich supernovae. Besides a study of the supernovae themselves, the authors also study the surroundings of the supernovae to find potential signs of close host systems. Generally speaking, there are two kinds of mechanisms that can account for a supernova event: Either the collapse of a single massive star (core-collapse supernova) or a white dwarf that is somehow fed due to the presence of a close companion star star (thermonuclear explosion). Considering multiple scenarios of these two formation mechanisms, the authors rule out several of them based on their observations of Ca-rich supernovae in the context of their surroundings. 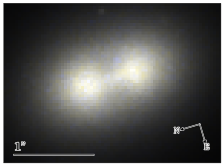 Figure 1: False contour image of the double core of NGC 1129. The authors suggest that the merger of the visible cores accounts for supernova 2007ke. (Figure 7 in the original paper)

Ca-rich supernovae as the result of merging castaways?

In line with their previous work, the authors rule out several formation mechanisms of Ca-rich supernovae. First they rule out that these supernovae formed from core-collapse of massive stars for the following reason. Even for the two supernovae located inside galactic disks, there are no regions that can account for the production of massive stars. Instead the authors argue that Ca-rich supernovae are more likely the result of a thermonuclear explosion in a binary system, and suggest a possible binary system that may account for supernova 2007ke (figure 1).

However, it remains unclear where the stellar binary system that accounts for the supernova comes from. Astronomers use the term progenitor for the stellar system that eventually evolves to a supernova. Currently, the most popular idea is that the progenitor was ejected from a globular cluster. To test the idea the authors compare the luminosities of some Ca-rich supernovae with the luminosity distribution of globular clusters. They conclude that this scenario is unlikely because the luminosities of the supernovae are very low compared to typical luminosities inside globular clusters (Figure 2). For the same reason, the authors also exclude the possibility that Ca-rich supernovae were part of dwarf galaxies. Another possible origin for these stars could be the halo of bright galaxies, but even  these locations with low stellar densities, the distances between the stars are still too high to account for the observed isolation of Ca-rich supernovae. Therefore, the authors argue that the progenitor stems were expelled with high velocity from their original birth location. As a most likely cause for the actual supernova event, the authors suggest the merger of a neutron star with a white dwarf. Finally, the authors refer to other studies and suggest that interactions of a binary system with a super massive black hole might account for the high velocities that allowed the progenitor to travel significantly far away from its host before the supernova explosion. 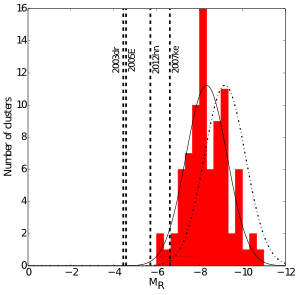 Figure 2: Comparison of the upper limits of luminosity for some supernovae (vertical dashed lines) compared to the luminosities expected in globular clusters (red histogram) as observed in the R-band. The solid curve represents the normal distribution of the histogram and the dot-dashed curve represents the luminosity weighted fitted distribution. (lower panel of Figure 8 in the paper)

To summarize, the additional observations of five more Ca-rich supernovae provide important constraints on the formation of this odd type of supernovae. They plausibly suggest that such observations can be explained by an expelled binary system that later merges. However, it remains to be seen  what models of  the suggested formation mechanism will tell us.