Status: Accepted for publication on A&A

In the last decade, instrument development has allowed for the direct imaging of giant exoplanets around nearby stars and many surveys, like the Gemini Planet Imager Exoplanet Survey (GPIES), and Spectro-Polarimetric High-contrast Exoplanet REsearch Survey (SPHERE), are currently looking for new exoplanets at wide separations from their host stars.  Based on the number of planets detected with radial velocity measurements, it was thought that these surveys would find 50+ new planets in their multi-year campaigns.  However, the number of giant exoplanets and brown dwarfs (bigger than planets, but to small to be a star) have been drastically lower.  GPIES has only discovered one planet to date and the SPHERE instrument has been used in the discovery of one other gas giant by an independent research team.  Why are we not finding these wide-separation gas giants?

Even though these studies have found little to nothing so far, we are still able to learn something about our universe.  A recent paper takes a look at the numbers of giant planets found around low-mass stars.  The authors report their results from a survey called MASSIVE (M-dwArf Statistical Survey for direct Imaging of massiVe Exoplanets).  They observe 58 M-dwarfs (the smallest stars) and find no new exoplanets but do see two gas giants already known.  They additionally find that 13 stars in their sample are actually close binaries.  Using their survey sample, the team determines how likely they are to find a planet as a function of its mass and separation from the host star (Figure 1).  They go on to determine generally the likelihood of finding a 2-80 Jupiter-mass companion from 8-400 AU (Earth-Sun distance)—a likelihood of ~4.4%.  When just looking at exoplanets (2-14 Jupiter-masses) the probability is ~2.3%.  These are the probabilities of finding substellar companions around M-dwarfs only.  What about larger stars?

Figure 1. These plots show the likelihood of finding planets in the MASSIVE survey. On the left, the colours show the the probability of finding a planet of a certain mass as a function of it’s distance from the host star. On the right, the sensitivity probability is shown by the colour contours. This shows that the survey will find any planet from ~5-80 Jupiter masses 90% of the time. Plots from the paper.

The authors compare their results to surveys of the more massive A to F type stars with three cases.  In the first case, they look at all the stars.  While ~4.4% of low mass stars host a gas giant, surveys of larger stars find an occurrence rate of ~10.8% (see Figure 2).  This suggests that there is a ~74% chance that there are actually two distinct populations that arise in low-mass star systems and high-mass star systems.   In the second case they look just at the numbers of planets with a low mass ratio between the host star and its planet.  They find that 9.1% of high-mass stars host a companion, compared with 2.6% for low mass stars.  It seems that the number of giant planets is correlated to the host star mass, a finding that was predicted by planet formation theory.   They also study the number planets with an intermediate mass ratio in the third case but find no evidence of two populations for low and high mass stars.  Overall it seems there is a correlation between the number of wide orbit substellar companions and the stellar mass. 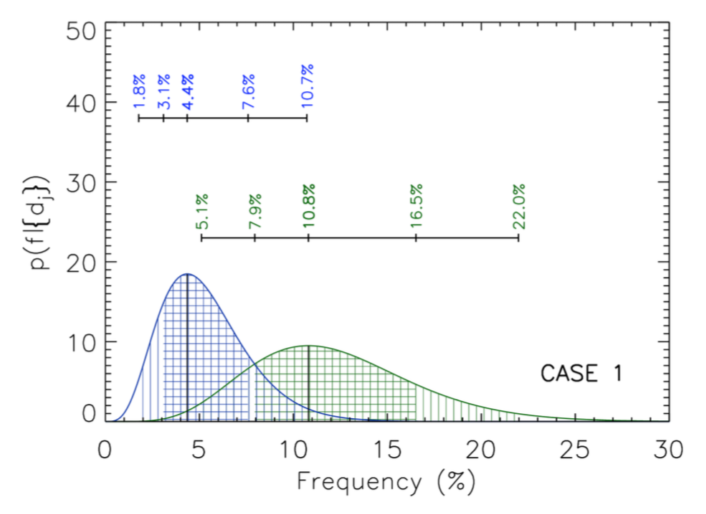 Figure 2. This plot shows the difference in the frequency of finding planets around low-mass stars (blue) and high-mass stars (green) for case 1, which includes all the stars. The two distributions are different, though overlapping which means there is a good chance the two represent different populations. Plot from paper.

It is important to study the statistics of exoplanets as they are indicative of how planets form and the MASSIVE study can tell us something about how planets form around the lowest mass stars.  There are two main theories on planet formation.  Core accretion is a “bottom up” route to planet formation in which dust and small grains in a protoplanetary disk clump together to form larger bodies which eventually gravitationally attract more material until they form planets.  Alternatively, planets can form “top down” where small instabilities in the protoplanetary disk causes it to fragment and clump.  This method is known as gravitational instability.  Core accretion is the accepted method for how the Solar System formed and how many hot Jupiters (gas giants very close to their host stars) are thought to have formed.  Giant planets further from their host stars may form by gravitational instability.  The three cases the authors looked at (all planets, low mass ratio, intermediate mass ratio) were designed to test these formation mechanisms.  The second case is thought to be planets more likely formed by core accretion and the third case possibly by gravitational instabilities.  The different occurrence rates for the different mass classes of cases two and three indicate that the formation mechanisms may be dependent on the mass of the disk, which is in turn dependent on the mass of the star.  Core accretion likely only forms planets in a system with a planet-to-star mass ratio of only a few percent.  On the other hand, gravitaitonal stability seems to only form when the system has a high mass ratio.

Direct imaging, despite its benefits, is a slow technique and relatively few stars have been imaged compared to the high number of stars studied in other detection techniques like radial velocity and transit surveys.  Because of this, the statistics in this paper are based on a small sample size.  Only as more direct imaging surveys continue will we be able to truly understand the impact of mass on planet formation.