Imagine you sit down to watch TV and the fourth Harry Potter movie is just about to start. You aren’t a fan (gasp) of the Harry Potter series so you haven’t read any of the books (double gasp). You watch the movie anyway and are wildly confused. Nevertheless, you end up knowing pretty well what happens in the fourth book, and barely enough to make some guesses about the other three books.

Now, why the long winded analogy? Planets are complex. They form through dynamical interactions of billions of planetesimals in a disk, evolve to form bonafide planets, and develop atmospheres with complicated molecular abundances. Ideally, we could thoroughly analyze each stages of a planet’s formation history (i.e. read all the books) but the reality is that all we can do is indirectly measure the planet’s current atmospheric composition via transmission spectroscopy and use that to infer something about the planet’s formation history. In other words, we are the ninnies who only watched the fourth Harry Potter movie.

The author’s of today’s paper try and assess how much knowledge you can actually gain about the first four Harry Potter books by only watching the fourth movie. In other words, by looking at observations of exoplanet transmission spectra, what can we learn about the various stages of planet formation?

In order to tackle this problem the authors create separate computer models to describe each process associated with planet formation. The input of one model goes into the output of the next, just like a series of novels weaving together to form a greater story.

The first model depicts the very first seeds of planet formation starting from when there is just dust in the protoplanetary disk itself. It computes how the disk evolves and how the first seeds of a planet are born through accretion. Although this is a canonical model (see this and this), the authors provide a novel addition. It is well-known that once particles in a disk form small planetesimals, several of them begin to collide with each other to coalesce into a larger planet (like a snowball rolling down the side of a hill). When this newly formed planet gathers enough mass it starts to gravitationally attract a gaseous envelope, creating an atmosphere. Once the planet develops an atmosphere, any new planetesimals colliding with the planet evaporate in the atmosphere, instead of adding more mass to the planet’s core.

This process entirely changes the composition of the young planet’s atmosphere as these evaporating planetesimals deliver new, unknown molecular species. This is the climax of Book 1’s story line. With our newly formed planet and atmosphere combo, we’ve set the stage for Book 2: Evolution.

The second model propagates our newly formed planet through a thermodynamic evolution. Our planet begins to cool and contract as its planetary structure solidifies. As the temperature and structure of the planet changes, the atmosphere itself begins to evaporate away. Our planet is now about 5 Gyr old and it has a clearly defined mass, radius and luminosity: the three pillars of the Book 3: Composition.

Book 3 is where the planet’s atmosphere officially gets its chemical makeup. Think of this as a flashback in our story during which the authors work on character development without progressing the story any further. Remember that it was the planetesimals bombarding our newly formed planet that were providing most of the atmospheric enrichment. In this model the authors assign various viable chemical compositions to those planetesimals in order to determine a full range of chemical compositions the planet’s atmosphere could have. This leads us to our last Book 4: Observations.

The authors now take all the information from Book 1-3 and use them to set the storyline for our final book. Using the chemical composition and temperature structure of our planetary atmosphere, the authors create model transmission and emission spectra (see this and links therein). Figure 1 depicts what our model spectra look like. Each scenario presented has a different structure, since each spectra was produced under different conditions (explained below).

But then, the movie comes along and butchers the highly intricate and detailed book the authors have written. Observing with even the most state-of-the-art telescope introduces a series of instrumental noise sources, which make what we see through the eyes of our telescopes slightly different from what we model. Figure 2 shows what the series of spectra shown in Figure 1 will look like through the eyes of the James Webb Space Telescope, scheduled for launch in October of 2018.

Figure 2. Here are the same exact scenarios as Figure 1 but now we are looking at what those planet cases would look like through the eyes of the James Webb Space Telescope. Main Point: Because instrument noise degrades the resolution and quality of our spectrum, now our models look very similar in some regions.

We’ve completed the story line but we haven’t yet answered the question. By looking at observations of explanatory spectra (the movie) can we infer what’s happened in Books 1-4? The authors answer this question by creating two wildly different initial conditions and propagating them both through the four models (think of this as two different prefaces to the same book series). In the first scenario our planet begins to form in the warm inner part of the disk (red and black curves in Figure 1 & 2) and in the second, the planet begins to form in the outer colder part (blue curve in Figure 3). Both scenarios, after being propagated through the models, form Hot Jupiter-like planets. But, is their chemistry different enough, such that we would be able to tell?

If this were the case, the final observations in Figure 3 would need to be so different that we could easily discern between the author’s two cases. However, the authors find that even these extremely different initial conditions lead to pretty similar JWST observations. Hot Jupiters, regardless of where they formed in their disk, end up being oxygen rich. See Figure 3 below, where the authors demonstrate the various outcomes of Book 3: Composition. In all the different chemical scenarios, most planets form with a carbon-to-oxygen ratio of less than 1. 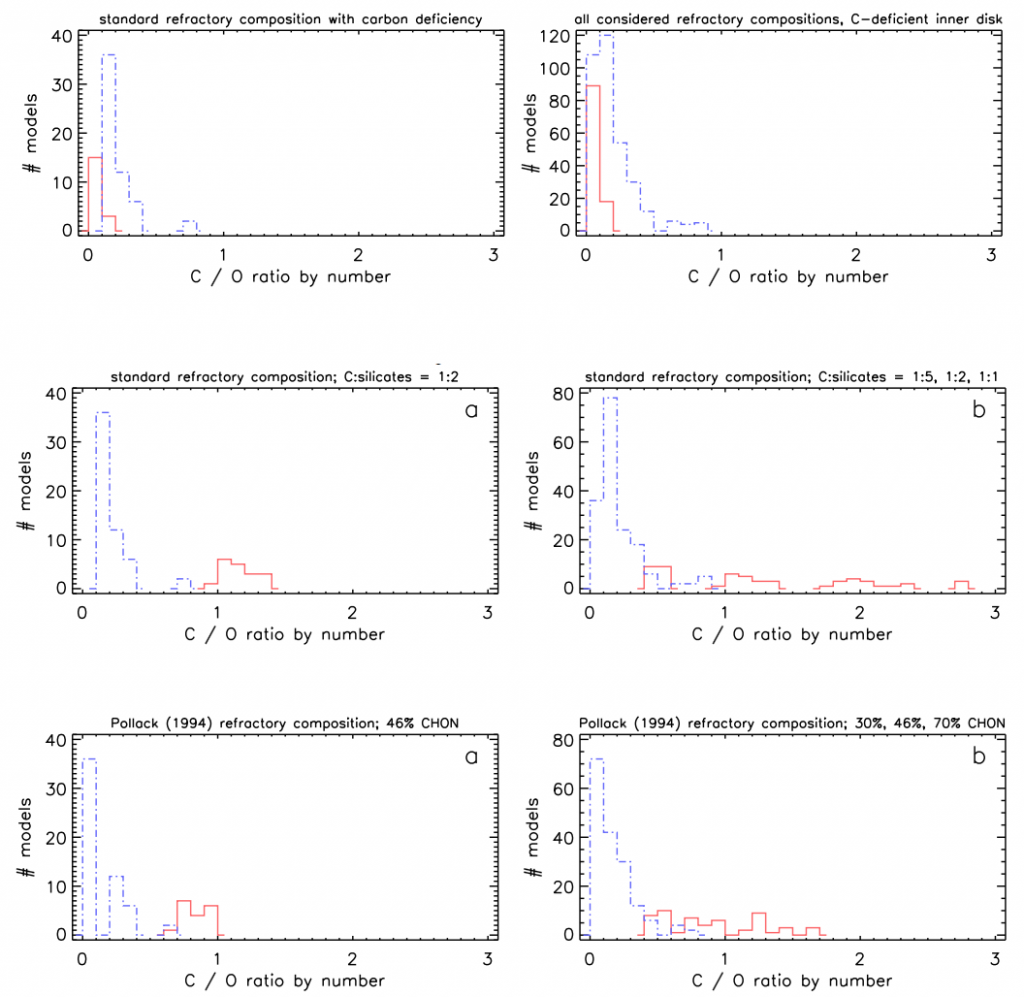 This is where my Harry Potter analogy ends because I can’t think of two wildly different prefaces to Harry Potter and the Sorcerer’s (Philospher’s…) Stone that would’ve resulted in nearly identical movies. Consider this a formal challenge to all the people still reading this. I conclude by saying that planet formation is definitely more complex than the Harry Potter series. And in the coming years, as we prep for the launch of the James Webb Space Telescope, you can expect to gain more insights into this complicated tale.