One of the best things about being a scientist today is being part of a huge, supportive community. Through the sharing of ideas at conferences all over the world and through the publication of scientific papers on sites like arXiv, unlikely collaborations are formed. This often results in a better scientific output. Moreover, in an age where the costs of cutting-edge facilities and ground-breaking space missions have crept over into the billions,  global cooperation and collaboration are vital if we are going to keep pushing the frontier of what we know about our pale blue dot and the universe which engulfs it. Today’s bite focuses on a recent workshop, hosted by the International Astronomical Union (IAU), held to discuss the future of space-based Ultraviolet-Optical-Infrared (UVOIR) telescopes, more specifically the main scientific motivation for such a telescope and how it fits into the long-term plans for space missions.

Is there anyone out there? 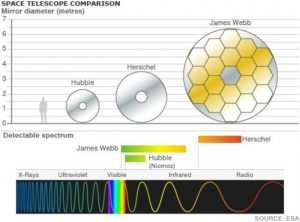 When it comes to the big questions in science, it’s hard to get more fundamental that one of the biggest drivers for space exploration we have — are we alone in the universe? With an ever-increasing catalogue of potentially habitable exoplanets and technology advancing at an impressive rate, we are certainly reaching an era where it is possible to find signs of extra-terrestrial life. One promising opportunity lies within the study of exoplanetary atmospheres by searching for the characteristic traits indicative of life. To be confident in such observations, current predictions suggest that a space-based telescope must have a mirror with a diameter larger than 10 m, preferably 12 m. For context, the largest mirror in space belongs to the now decommissioned infrared space telescope Herschel, which is 3.5 m in diameter, but next year this will be superseded by the impressive 6.5 m mirror of the James Webb Space Telescope. Clearly, a mission with a mirror larger than this requires widespread support.

Why do we need such a large mirror?

To investigate atmospheres on exoplanets, we turn to spectroscopy. One method, transit spectroscopy, involves waiting for a planet to creep over the disk of its host star, light from which will travel through the planet’s atmosphere before it reaches our detectors, and looking at what wavelengths are absorbed (see an astrobite on this subject here). However, this method is limited to planets close to their parent star, the so-called Hot Jupiters, meaning we are not able to target Earth-like planets we would anticipate to be more suitable for hosting life. 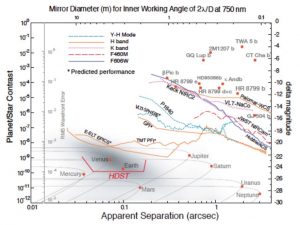 Figure 2: The planet/star contrast for F, G, and K-type stars versus the planet/star apparent separation. This highlights the limits of direct imaging exoplanet experiments current and future. HDST represents the desired UVOIR telescope. Figure 1 in the paper, but taken from the report “From Cosmic Birth to living Earths: The Future of UVOIR Space Astronomy”.

In the past few years, we have progressed towards directly imaging planets by blocking out the light from their host star using a coronagraph — such experiments require mirrors with large diameters. Ground-based experiments can use huge mirrors to look for signs of life, so they tend to be limited by our atmosphere and are more inclined to focus on highly contrasting planets sitting close to their host star — Hot Jupiters. Space-based experiments are limited by the logistics of the size of mirror we can launch into space, but the upside is that they don’t have Earth’s atmosphere. This means that they can generally target planetary systems with smaller planet/star contrasts. This is apparent when we look at Figure 2 as the directly-imaged exoplanets and instrumental limits are focused towards the top-right of the plot, the Hot Jupiter domain, whereas our solar system is located towards the lower-left in the void where no direct imaging experiment currently exists.

Space missions are time-consuming and expensive, meaning it is important to be able to target scientific goals within a variety of fields in order to justify costs and to engage a wider scientific community. With a large UVOIR telescope in space, many other areas of science will benefit including: 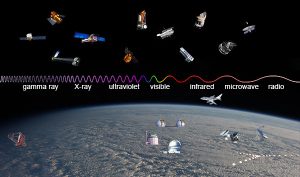 Figure 3: A selection of NASA missions currently in orbit, as of February 2013, across the electromagnetic spectrum. Credit:NASA

A large UVOIR mission would be an exciting addition to an array of space missions currently under construction and those proposed, including:

These are only a few examples but, clearly, there are no plans for telescopes comparable to the James Webb Space Telescope in the works. There is a huge gap in the market for an UVOIR telescope, but the expertise and money required to develop a mission of this scale requires a coordinated approach to make it worth it. It must be able to accomplish something new, whilst complimenting current and future observing capabilities. This workshop represents the start of this telescope’s 20-year journey to becoming a fully-fledged mission, so even though no concrete instrument has even begun to take shape, it is still very exciting to read about.