Stars start their lives surrounded by a disk of gas and dust. After several million years, the gas and most of this dust will dissipate, marking the end of the opportunity for gas giant planets to form. This timescale places strong constraints on our theories for how gas giants must form. The authors of today’s paper take a closer look at how the observations of disks around young stars have been carried out, and they find that many stars may actually retain their disks for far longer than previously thought.

Stars are not born on their own; rather they are born in clusters. The typical lifetime of protoplanetary disks is measured by first looking for disks around the stars in a cluster, and then comparing the fraction of stars with disks among different clusters of different ages. Such results are presented in Figure 1, which shows that 50% of stars lose their disks after 2 or 3 million years and 90% have lost their disks by the time they are 6 million years old. The author’s of today’s paper critique these results by identifying several selection effects that plague cluster observations. 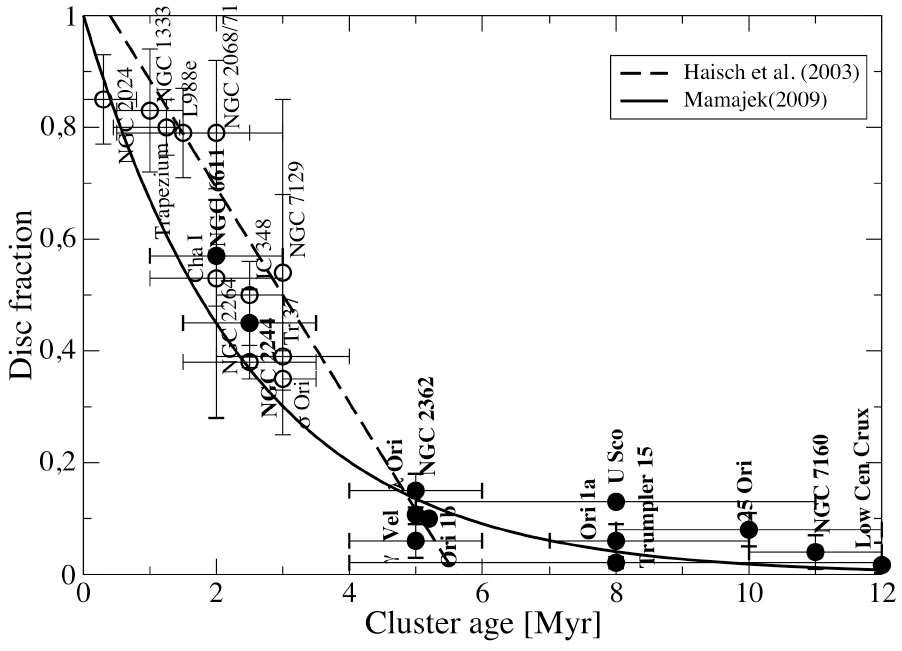 The standard picture showing how quickly the fraction of stars with protoplanetary disks decreases with age. The lines show linear and exponential fits to the data.

The core problem is that shortly after they form clusters will begin to expand and dissolve as the stars near the edges of the clusters are expelled. By the time clusters reach an age of 10 Myr, only 10-20% of their original stars remain. Clusters quickly expand beyond the field of view of most telescopes, so observations of older clusters are dominated by the stars that started in the cluster’s dense central region. The disks around stars in the central region are easily disrupted by gravitational perturbations from nearby stars as well as photoevaporated by the light from nearby bright massive stars. (For more on how cluster environments affect protoplanetary disks, see these astrobites.) In older clusters, the bias towards sampling these central stars may severely under-predict the disk fraction, resulting in an inferred disk dispersal timescale that is too short.

The authors attempt to correct some of these effects, and in Figure 2 they present an updated version of Figure 1. They added measurements of stars from the outer parts of clusters, and they added disk fractions for sparser clusters. These adjustments increase the disk fraction for older stars and lengthen the average disk lifetime. However, these corrections are not easy to make. The ages of sparse clusters are difficult to determine, and including stars at the outer reaches of clusters runs the risk of including stars that are not actually members of the clusters at all. These interlopers are likely much older and disk-free, so including them would artificially lower the measured disk fraction. For these reasons, the authors note that their updated values are still lower-limits on the true disk fractions.

In the end, the authors estimate that between a third and a half of stars may still host disks when they turn 10 Myr old. Perhaps we need to extend the deadlines we’ve placed on planet formation. 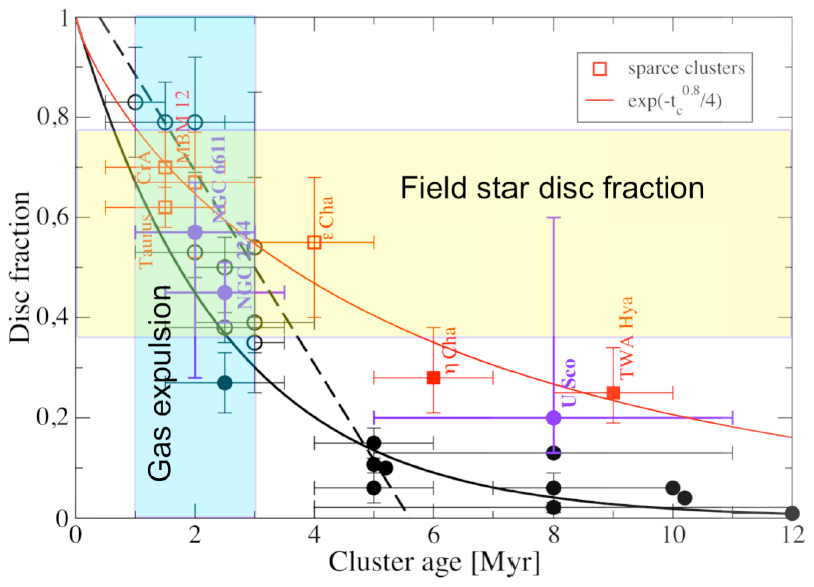 An updated version of Figure 1, now showing a longer protoplanetary disk lifetime (red line) when sparse clusters and stars at the edges of clusters are included. The authors note that this is likely still underestimates the disk fractions and of the average disk lifetime.