‘One Direction’ – Isotropic Universe or not?

Title: How Isotropic is the Universe?

By the end of this article, you will have learnt two things:

General Relativity and Cosmology gave rise to the current model of the universe – the famous Lambda-CDM. This is a universe made up of regular matter, cold dark matter and dark energy. One of the pillars of this model is something called the Cosmological Principle, which says that the universe is homogenous and isotropic on large scales. Isotropy implies that there are no preferred directions, and homogeneity means that there are no preferred locations. With respect to our observable universe, this means that an observer sees the same distribution of matter no matter (!) where in the universe she is (homogenous), and an observer sees the same distribution of matter in whichever direction in the sky she looks. This is obviously not true when you look in the direction of or sit in the middle of, let’s say, a cluster of galaxies which has a much denser concentration of matter than most parts in the universe, but on a large scale of the order of millions of light years, observations indicate that homogeneity and isotropy are principles that we can live by when it comes to the universe. Figure 1 illustrates these closely related yet different properties.

Fig 1. Cases of homogeneity and isotropy being preserved independently, in a) 3-D and b) 2-D examples.

It is crucial that we convince ourselves that it is possible to construct a model of the universe that is homogenous but not isotropic i.e. a universe that has roughly the same density, but a preferred direction where distribution of galaxies or even gaseous matter is more clumped or sparse. We could possibly be in a universe that is uniformly dense, like M&Ms lined up in neat straight lines on a chocolate cake – in the direction of the straight line, the universe looks different than it does in a diagonal direction.

One awesome way that astrophysicists have figured out that the universe could be isotropic is by looking at the Cosmic Microwave Background – the relic radiation from the first epochs of the universe that is a signature of the early stages when matter and light headed their separate ways. The CMB is a radiation that is uniform to roughly 1 part in 100,000 – in whichever direction you look at! Since the CMB indicates the rough path that matter perturbations took since the early universe, it is suggestive of an isotropic (and hence a homogenous) universe. Here’s the catch though.

Fig 2. PLANCK map of the CMB in the entire universe. While being mostly of the same temperature, at small scales, one can see anisotropies (denoted by blue cold and red hot spots).

CMB actually does have anisotropies – fluctuations/inhomogeneities in the tiniest parts in temperature – the very 1 part in 100,000 that I mentioned above. This means that it’s worth investigating theoretical models of the universe that demand homogeneity but allow a subtle level of anisotropy, and map that to data from CMB telescopes like PLANCK, a telescope in space. These theoretical models are called the Bianchi Models.

Today’s paper characterizes some Bianchi models that are within the realm of the anistropy of the CMB. Anisotropy dictates that CMB photons from the early universe travel different paths and take different times (that changes their orientation or polarization) because of the tiny anisotropy. This is called ‘shearing’ of the CMB photons, an effect that is minute yet detectable in CMB maps. In this paper, several new kinds of shears were studied in order to investigate whether the universe is definitely isotropic, or mostly isotropic with tiny fluctuations and some slightly ‘preferred’ directions. For this, the team uses not only CMB temperature data, but polarization data too. Polarization of the CMB tells us of the orientation of the photons (especially a characterization of their electric and magnetic fields), which means more information on the ‘shearing’ due to these anisotropies. 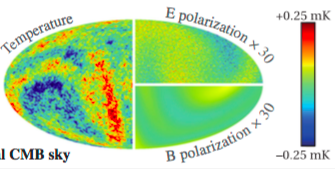 Fig 3. Temperature, and Electric and Magnetic field polarization data were used to reconstruct the CMB map of the universe, with Bianchi models that conformed to current Lambda-CDM predictions.

In this study, the universe was modeled as a perfect fluid with dark matter, dark energy and normal baryonic matter, and allowed to expand with the formalisms of General relativity and CMB anisotropy i.e. the universe was allowed to depart from isotropy and yet kept in check so that cosmological parameters resemble the ones observed. Keeping the theoretical details aside, the team concluded that the Bianchi models being considered here resemble the Lambda-CDM model to a greater degree. In other words, they were successful in improving the constraints that we have on the isotropy of the universe. Hence, for now, the universe is nearly flat, homogenous and isotropic – there’s no ‘one direction’ that’s preferred. Long live Lambda-CDM!