Deep in the fathomless centers of galaxies, there lurk fantastic beasts of incredible energy and power. Legend has it that our ancestors have long since been aware of their presence (e.g. Carl Seyfert in 1943 and Maarten Schmidt in 1963), but separated by our great divide and limited by our technologies, little has been known about them. Appearing in various shapes and sizes, some beasts have been spotted to spurt out jets, while others appear more docile. How to find these fantastic beasts, you ask? Well, most give away their presence in the optical and UV, while others show up in the radio.  These shape shifters are unified by one thing: the source of their power through the accretion of matter onto supermassive black holes. Astronomers call them active galactic nuclei, or AGNs (shhh, here is a secret guide on their different shape shifting abilities).

Although active galactic nuclei are predominantly discovered in the optical/UV and radio, they actually emit all the way up to X-rays, which is true with most highly energetic astrophysical phenomena. Their spectral energy distributions (SED), an example shown in Figure 1, are characterized by different components that arise from different parts of their structures. First, we have a blackbody-like bump — the “big blue bump” — in the optical and UV, which is thought to originate from their accretion disks. The big blue bump is well-fit by the standard accretion disk model, which is geometrically thin and opaque to radiation (or optically thick). Then, we have some emission in soft X-ray (< 5 keV) whose origin is still unclear. Finally, we have hard X-ray emission (> 5 keV) well-described by a power-law. The origin of the hard X-ray emission is not completely solved, but astronomers believe that the up scattering, or inverse Compton scattering, of accretion disk photons by plasma of hot electrons in a corona surrounding the disk produces these hard X-ray emissions.

Fig. 1 – An example spectral energy distribution (SED) of an AGN.

The formation of the hot corona and its heating mechanism are still unclear. Leading models posit that it is formed by the evaporation of material from the underlying cool disk, and then continuously heated by the disk magnetic field. More specifically, magnetic loops produced by the disk emerge and reconnect with other magnetic loops in the corona in a phenomenon known as magnetic reconnection, thereby releasing magnetic energy to maintain the corona at high temperatures. The authors of today’s paper investigate the effect of magnetic field on the structure and spectrum of the magnetic-reconnection-heated disk-corona model, particularly focusing on luminous AGNs.

The authors encapsulate the effect of magnetic field in their model in a parameter they call the magnetic parameter β0 = (Pgas + Prad)/PB, where magnetic pressure is assumed to be proportional to the sum of the gas pressure and radiation pressure in the disk. Larger β0 corresponds to weaker magnetic field strength and vice versa. By tuning β0 and the accretion rate, the authors solve for the disk structure and derive the emergent SED. Figure 2 shows the simulated SEDs for different β0 and accretion rates. When β0 is small, strong magnetic fields are produced, which gives rise to similar-looking spectra regardless of accretion rates. As the magnetic field gets weaker (going down the panel), the model with higher accretion rate (dashed line) produces less and less hard X-rays. Eventually, the spectrum is dominated by the disk’s “big blue bump”. This agrees with observational trend that hard X-ray spectra of luminous AGNs become softer at higher accretion rates. 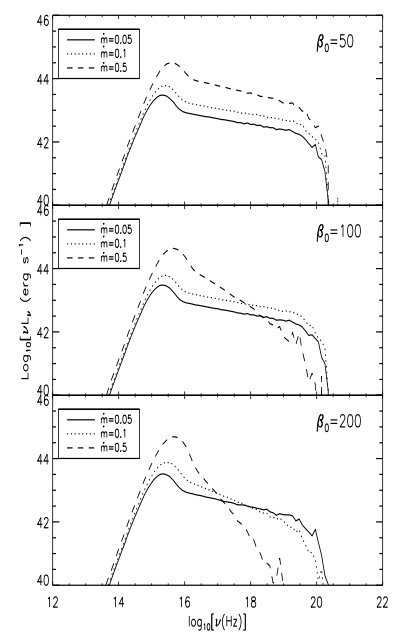 To compare their models with observations, the authors plotted the observable Lbol/Lx as a function of accretion rate for different magnetic field strengths, as shown in Figure 3.  The red crosses are observational samples of luminous AGNs with measured black hole masses from a different work. The model with β0=200 more or less agrees with observations at ṁ < 0.2, where beyond that the model underpredicts Lx — the corona becomes too wimpy to produce enough X-rays. At ṁ > 0.2, the model with β0=100 at slightly higher magnetic field agrees with the last data point, although it fails to at lower accretion rates. Although the model is far from perfect, it agrees with observational results at large. As with all things research-related, there remains more work to be done before we can piece together a complete picture of those fantastic beasts called AGNs. 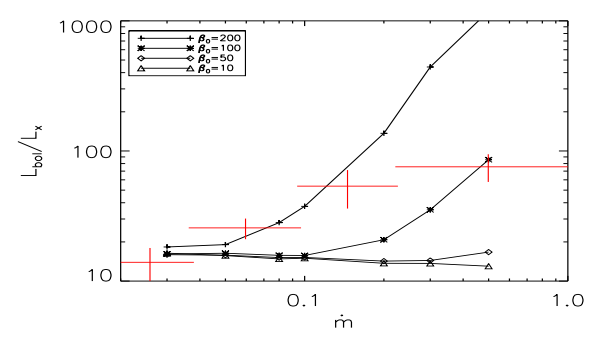