It was a cold Christmas morning. I peered out the window and saw a blanket of snow covering the ground, shimmering in orange-red light from the Sun as it peeked over the horizon. My bedroom door was open just a little, just enough to see that the lights in my house were still off and the shades on the windows were still closed. Everyone else must still be asleep. I tiptoed out of my room through the house, trying to keep quiet as I made my way towards the tree downstairs. Before anyone else woke up, I wanted to catch a glimpse of what presents had spent their night resting patiently under the tree waiting to be opened. They were much more patient than I could ever be.

When I finally made it, I saw one gift shone brighter than all of the rest. Could it really be what I thought it was? It was packaged in the biggest box, but it did not quite fit and it was poorly wrapped too. I could already see what it was. It was a giant planet! It was just what I wanted for Christmas, but where did it come from?

When I wished for a giant planet, I never expected anyone would actually get me one. I did not think that was actually possible, but someone figured out where to buy one. I picked up the planet and searched for clues that might indicate where they bought it. There were no tags in the planet’s atmosphere from stores like Macy’s or Target. The box did not have an Amazon logo on it. The planet must have come from a distant planetary system in outer space.

I wanted to know at precisely what distance from its star the planet formed, so that I could search young extra-solar planetary systems for such a planet and get someone else the same type of wonderful gift I received. Puzzled by the lack of tags, I borrowed the Wide Field Camera 3 on the Hubble Space Telescope in order to take spectra of the planet’s atmosphere, hoping this would tell me where the planet formed. I looked for emission lines from the most abundant molecules in the atmosphere: CO, CO2, H2O, and N2. (Most of the atmosphere is actually made of H2 and He, but these species do not emit any spectral lines at cold atmospheric temperatures.)

Using modeling techniques from two other astrobites (and this article), I found that the atmosphere contained 4 times as much CO as N2, and also relatively little H2O or CO2. From this, I can already tell that the planet must have formed far enough away from its star that its natal disk was cold enough to freeze H2O and CO2 into solid form. Only CO and N2, with much lower freezing points, were able to stay in gaseous form at these colder temperatures and in turn, end up in the planet’s atmosphere.

With most of the atmosphere’s carbon and oxygen contained in CO, its ratio of Carbon-to-Oxygen (C/O) is about 1.0. Similarly, with two nitrogen atoms per N2 molecule, its ratio of Nitrogen-to-Oxygen (N/O) is about 0.5. If these ratios have not changed over time, the ratios of C/O and N/O in the planet’s atmosphere should be the same as the gas ratios of C/O and N/O in the planet’s natal protoplanetary disk at the particular distance where the planet formed. Thus, these ratios can tell me where my planet formed.

I turn to my copy of today’s featured paper by Piso et al. and find their simplest model of how the C/O and N/O gas ratios vary throughout a protoplanetary disk (See Figure 1). They point out that both the C/O and N/O ratios are lower at the closest distances to the planet’s star because the molecules with higher freezing points (H2O and CO2) have more oxygen atoms than either carbon or nitrogen. Looking at the diagram, I see that ratios of C/O = 1.0 and N/O = 0.5 would suggest my planet formed somewhere between the CO2 and CO freezing point lines (known as snow lines) at about 10 AU and 60 AU respectively — which is not very specific.

Figure 1. C/O and N/O ratios in protoplanetary disks over a wide range of distances. The snow lines of each molecule are marked with vertical dashed lines (assuming pure ice). With C/O = 1.0 and N/O = 0.5, my planet gift probably formed between the CO2 and CO snow lines. But could these lines be much closer to their stars? Taken from Fig. 2 of the featured paper.

In their second set of models; however, Piso et al. point out that I might be able to do an even better job of determining where my planet formed! They emphasize that the freezing points of CO and N2 might be much higher depending on the structure of individual ice grains. Frozen CO and N2 molecules do not just sit by themselves in a protoplanetary disk. When they freeze, they collect in a shell – along with other frozen molecules – around a silicate dust grain core (see Figure 2). In particular, these shells often contain frozen H2O, the most abundant form of ice in a disk. 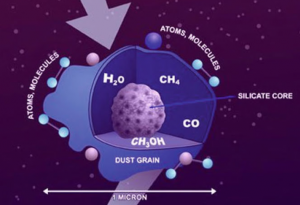 Figure 2. Dust grain covered in an ice shell (known as a mantle). The CO (or N2) part of the ice can stay frozen at much higher temperatures if it mixes with the H2O component of the ice. Image Credit: Bill Saxton, NRAO/AUI/NSF.

If my planet is from a disk with mostly water-dominated CO ice, then I would know it formed between 10 and 20 AU. Unfortunately, whoever gave me this gift did not leave me any observations of the planet’s original disk that would indicate the location of the CO snow line. For now, I will have to settle with knowing that my giant planet gift originally formed somewhere between 10 AU to 60 AU. And just as I would like to narrow down that range, Piso et al. point out that we will need more observations of snow lines in protoplanetary disks to be able to use the C/O or N/O ratios in exoplanet atmospheres to figure out where these planets formed.

All in all, I am overjoyed with my giant planet gift!

Author’s Note: This is a fictional story.