The Sun In A Distant Mirror 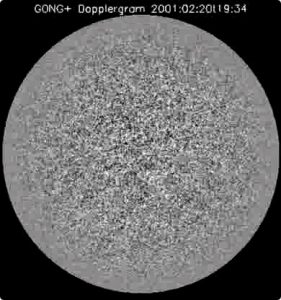 Figure 1: Snapshot of the line-of-sight velocity variations on the Sun’s surface, measured from the Doppler shift of atmospheric absorption lines. (Image: GONG/NSO/AURA/NSF)

How can we learn what lies beneath the surface of a star? One approach, called asteroseismology, is to study a star’s vibrations to infer its internal structure. The inside structure of the Sun in particular can be studied in great detail, because its vibrations are actually apparent on its surface (Fig. 1, see also: Helioseismology): The visible pattern of surface quivers shows the imprint of global acoustic oscillations, which are caused by resonant waves traveling through the Sun on peculiar paths, probing various depths. The same must be happening in faraway stars, yet due to their distance only the variability of their overall properties can be measured, for instance changes in brightness or temperature, which are however similarly caused by the stars’ intrinsic oscillations.

An impressive instrument that has been built specifically to measure the brightness of stars with extreme precision over time is the Kepler space telescope. Its primary aim is to detect the transits of exoplanets, but its features make it suitable for asteroseismology as well. The authors of today’s paper investigate how Kepler would see a Sun-like star from far away, by pointing it at Neptune.

The key idea of the paper is to determine the oscillation characteristics of the Sun by analyzing the intensity variations of the sunlight reflected by Neptune. This kind of measurement would allow a novel check of the calibration of widely used scaling relations, by observing the reference star – the Sun – with the same instrument as the actual target stars. These scaling relations are equations that connect the measurable (asteroseismic) quantities with the fundamental stellar properties, for example mass and radius.

), which corresponds to the dominant “5-minute oscillation”, and the mean frequency separation between overtones (

), which are weaker oscillations that are also excited. The paper’s authors split up into seven teams to independently measure these parameters, all using slightly different methods of analysis. The underlying data, namely the light curve and its power spectrum (a decomposition of the light curve into frequency components), are treated just like the data of any other Kepler target (Fig. 2).

Figure 2: Left: The full Neptune light curve taken with Kepler, showing the intensity variations of the reflected sunlight over 49 days in 1 minute intervals. Right: The gray and black lines are the raw and smoothed power spectrum of the Neptune light curve. The solid red line is the best-fit model, which includes several noise components indicated by the dashed red lines. The main signal due to the 5-minute oscillations of the Sun appears at the bottom right of the plot, around 3100 μHz. For comparison, the green line shows simultaneous VIRGO data (see text). The blue peaks are caused by Neptune’s rotation. (Figure 1 from the paper.)

Surprisingly, all teams consistently overestimate the mass and radius of the Sun significantly by about 14% and 4%, assuming the standard solar reference values. However, this discrepancy can be explained by comparison with another, simultaneous light curve that was taken with the dedicated Sun-observing instrument VIRGO (on board the SOHO satellite). The true value of

was larger than usual during the time of observations, simply due to the random nature of the Sun’s oscillations.

In addition, the teams attempted to determine not just the frequency spacing, but also the heights and widths of the individual overtones (“peak-bagging”), to create a complete model of the observed oscillation spectrum. The results are rather uncertain due to noise, but the findings of the teams are generally consistent, and they agree well with the VIRGO measurements, after differences in the technical design have been taken into account (e.g. different bandpasses).

The successful indirect detection of the Sun’s acoustic oscillations in intensity measurements, with Neptune as “a distant mirror”, is a marvelous technological achievement. Not only that, but the lessons learned from this experiment will help further explore the limits of high-precision asteroseismology with Kepler.