New information from an old result: planets in globular clusters

If the orbital plane of an exoplanetary system is almost edge-on as seen from Earth, there is a good chance the system’s close-in planets will ‘transit’, or pass directly over the face of the host star. When this happens, we see the total light from the system make a characteristic dip.

In just the past few years, there has been a glut of transiting exoplanet detections (mostly from Kepler) sufficiently large for us to start figuring out exoplanet demographics. And in just the next few years, there will be many thousands more detections in episodic blasts of data releases from missions like TESS (projected launch in 2018) and PLATO (>2025), together with the slow but steady pitter-patter of planets from wide-field ground-based surveys like SuperWASP, KELT, HAT, XO, MEarth, TRAPPIST, NGTS, and others.

The field has been changing so fast that the year 1998 lies in the depths of antiquity. No transiting exoplanets were known back then, and one could have counted the total number of radial velocity detections on two hands. It was in that year that a group led by Robert Gilliland made what was classified as a “scientifically risky” proposal to use the Hubble Space Telescope (HST) to actually go looking for transiting exoplanets.

A general-purpose space telescope like HST is good at making sensitive optical observations, but the restricted fields-of-view and the high competition for observing time make them unsuitable for large-scale surveys. But Gilliland et al. had an idea: why not harness the sensitivity of HST to observe a dense globular cluster, where thousands of stars are packed together in the field of view?

The proposal was accepted. In July 1999, Gilliland et al. burned through 120 HST orbits to stare at the 120-light-year-distant cluster 47 Tucanae for 8.3 days. They monitored a field of 34,000 stars in a pioneering observation which today remains the deepest exoplanet transit survey of any globular cluster. Know what they found, aside from some variable stars?

But transiting exoplanets were not long in coming. The first transit detection, of the planet HD 209458 b, occurred just a couple months after the 47 Tucanae observations. HD 209458 b is a ‘hot Jupiter’, a giant and heavily-irradiated planet in a tight orbit around its host star. Due to their frequent transits and large size relative to their host stars, hot Jupiters are the exoplanets which are the easiest to detect using the transit method.

The detection of HD 209458 b came early enough for Gilliland et al. to incorporate the result into their analysis and try to figure out what their null result really meant. Since HD 209458 b represented the best idea of what detectable transiting planets looked like, they made the simplest possible assumption that they all looked the same, with radii of 1.3 Jupiter radii and orbital periods of 3.5 days. Based on a direct extrapolation, they found that they should expect to have detected 17 planets among the 34,000 stars of 47 Tucanae. Given their null result, they concluded that planets around stars near us and stars in 47 Tucanae must come from two different samples. Case closed. 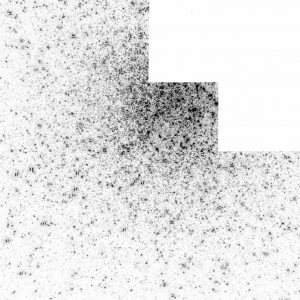 Figure 1: Nothing there?? This is what Gilliland et al. stared at for 8.3 days. The greyscale is reversed to bring out more contrast to the human eye. (The MAST archive, dataset U5JM180ZR, PI Gilliland)

Or was it? In today’s paper, Masuda et al. look back at Gilliland et al.’s result and ask, ‘Based on our much better understanding of planet statistics seventeen years on, do we still come to the same conclusions?’

Masuda et al. list a few reasons for which Gilliland et al.’s null result might not be surprising. For example, hot Jupiters tend to be found around metal-rich host stars. If the correlation holds here, the hot Jupiter frequency can be expected to be low because 47 Tucanae is old and metal-poor, with [Fe/H]~-0.7. Also, planetary orbits may become unstable due to the gravitational yanking-and-pulling of nearby stars, or they can unravel over the long timescales of an ancient globular cluster. Plus, the crowded stellar environment contains lots of stellar feedback in the form of winds, jets, or supernovae which could disrupt or blow away protoplanetary disks before they have time to form planets.

Our understanding of these and other scenarios require more data, so Masuda et al. put the 47 Tucanae result into an updated context with the best transit dataset at hand: the Kepler dataset. Their methodology followed that of Gilliland et al. as closely as possible so to make the best possible comparison. Then Masuda et al. simulated a Kepler-like sample of 47 Tucanae stars and derived total numbers of detections in 1000 tries. They repeated the process using only Kepler stars with masses within the range of masses of the ancient main sequence stars of 47 Tucanae (which tend to be small and long-lived). As a check, they did it a third time under all the same assumptions as Gilliland et al.

What they found was this: for planets with 0.5-2 Jupiter radii, Gilliland et al. should have found about 4.0 planets based on their first version of their simulation, or 2.2 planets based on the restricted mass range of main sequence stars in 47 Tucanae. Based only on knowledge of HD 209458 b, Masuda et al. found that they should indeed have expected to find 17 planets.

Why does the Kepler dataset predict fewer planet detections? The authors note that among the Kepler stars, transiting planets are half as abundant as what Gilliland et al. assumed. Furthermore, the abundance of transiting planets is further halved around host stars with low masses, like those in 47 Tucanae. Furthermore, hot Jupiters in the Kepler dataset have smaller average radii than HD 209458 b, which makes them less detectable.

Figure 2: Histograms of transiting planet detections in Masuda et al.’s three set-ups. Top: based on sample draws from the full Kepler dataset; middle: based on draws from Kepler stars that have masses corresponding to main-sequence stars in 47 Tucanae; bottom: based only on knowledge of HD 209458 b. (Fig. 3 in today’s paper.)

So can the Kepler and 47 Tucanae planet populations still be considered to be from different samples? The answer: probably, where the word ‘probably’ has a ~3-sigma (99.7%) confidence. Can we say that the two planet populations are the same when we restrict the analysis to host stars with the same masses? Again, probably, but only with ~85% confidence. Thus the non-detections of planets around 47 Tucanae is actually less surprising than it was in the year 1999, and we still really don’t know how exoplanet populations of a globular cluster compare to stars like those observed by Kepler. Masuda et al. finish by calling for the obvious next step: let’s have some new surveys of planets in globular clusters!