First detection of an equatorial jet on Venus

Title: Equatorial jet in the lower to middle cloud layer of Venus revealed by Akatsuki

Venus’ thick atmosphere is full of surprises. Our nearest planetary neighbor (between 0.28 and 1.72 astronomical units away, depending on the time of year), Venus has been visited by over a dozen spacecraft. The fleet of past and present Venusian spacecraft have revealed sulfuric acid clouds, a surprising lack of a global magnetic field, and a young surface studded with sprawling mountains but devoid of any Earthly plate tectonics. Chief among the oddities discovered at Venus is its ferociously fast atmosphere; though Venus rotates sluggishly, just once per 243 Earth days, its atmosphere whips around much more quickly—the speediest layer, at an altitude of about 70 km, takes only a few days to circle the planet. This phenomenon is called superrotation. Although Venus’ atmospheric superrotation was discovered in the 1960s, the cause is still debated. What, then, makes Venus’ atmosphere go ‘round?

The newest of the Venusian spacecraft, Japan’s Akatsuki orbiter, is equipped to study the atmosphere of Venus and may help to answer this question. Slated to arrive at Venus in 2010, Akatsuki initially missed its target and spent a few years orbiting the Sun before achieving orbital insertion at Venus in 2015. In its brief time at Venus, Akatsuki has observed the dynamics of Venus’ atmosphere, including a planet-wide gravity wave (not to be confused with a gravitational wave!) shortly after arrival.

In today’s paper, the authors study atmospheric dynamics on Venus using near-infrared images from the Akatsuki orbiter. Specifically, they observe the silhouettes of clouds against the background of thermal radiation from the planet’s night-side surface. They then use an automated cloud-tracking method to determine the wind speeds in the lower and middle cloud layers.

The cloud-tracking analysis, shown in Figure 1 below, reveals a gradient in the wind velocity in the lower and middle cloud layers, which span altitudes between 47 and 57 km. The clouds near the equator travel faster than clouds at higher latitudes, peaking at 85 m/s. The authors dub this speedy equatorial cloud band the equatorial jet. Despite the long history of Venus atmospheric observations, this is the first time an equatorial jet has been observed. Even over the relatively short timeframe analyzed here, the equatorial jet varies substantially, leading the authors to suggest that perhaps the earlier nondetections of the jet indicate that it simply wasn’t there; it may arise due to some unknown episodic stimulus. 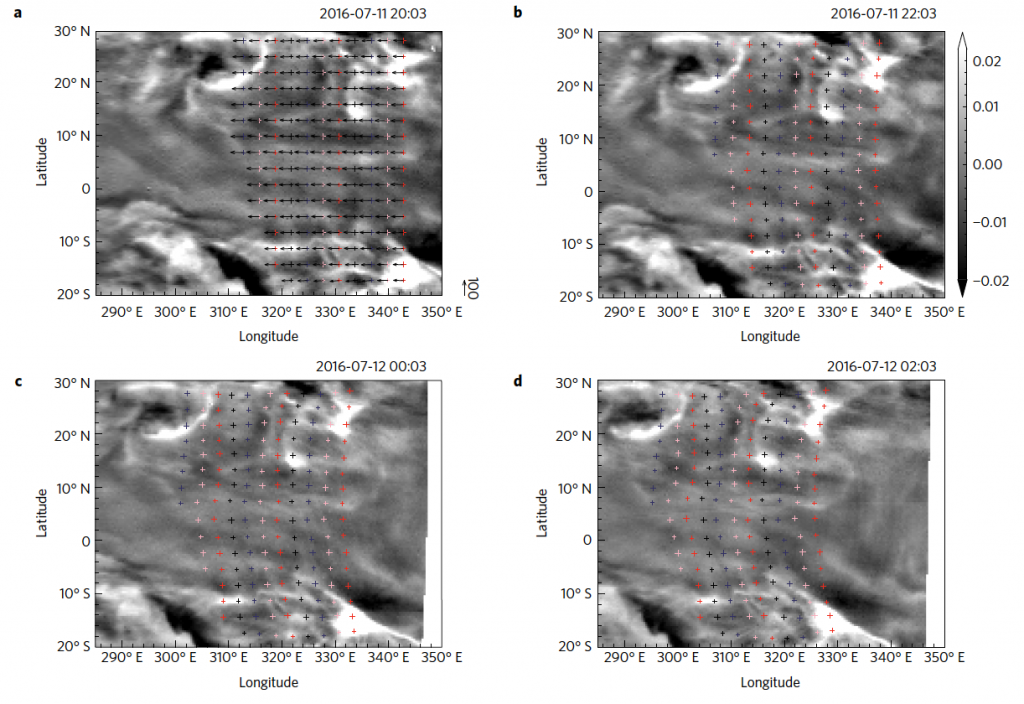 Figure 1. Near-infrared images of clouds on Venus taken with Akatsuki‘s IR2 camera. The westward velocities are indicated with the black arrows in panel (a). Panels (b)-(d) show the locations of those points 2, 4, and 6 hours later, as indicated by the labels in the upper right corner of each panel. The colors are added to guide the eye in tracking each location from panel to panel. The highest velocity occurs just northward of the equator. Figure 1 from the paper. 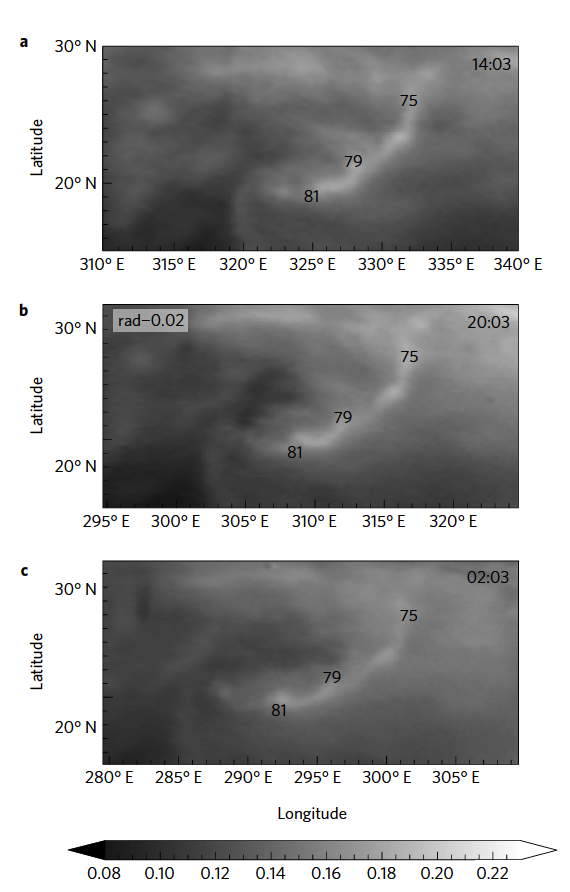 Figure 2. Near-infrared time-series of atmospheric holes. The shading indicates the radiance, with the brightest features appearing white, and the labels indicate the velocities of the individual features in meters per second. Panel (b) has been corrected by 0.02 radiance units to correct for light leaking over from the dayside of Venus. The features closest to the equator move the most rapidly. Adapted from Figure 3 from the paper.

In order to confirm that the observed variation in the wind velocity is due to latitudinal variation rather than altitude variation, the authors trace the motion of individual features in the near-infrared images. These bright features, where more of the thermal radiation from Venus’ surface escapes through the clouds, are called radiance holes. Using this technique on multiple features near the equator, one of which is shown in Figure 2, they confirm that for a given altitude, the wind velocity increases as you approach the equator.

The authors also compare their near-infrared images of the low-altitude cloud layers on the nightside to ultraviolet scattered-light images of the top of the cloud layers on the dayside. Interestingly, these daytime cloud-top images tell a different story—instead of peaking, the wind velocity is smallest at the equator. Clearly, the equatorial jet is a fickle and elusive feature, demanding particular observing techniques and, evidently, looking at the right layer of the atmosphere at the right time.

The authors identify two main hurdles that need to be cleared in order to understand the origin of Venus’ atmospheric superrotation: discerning the way that momentum is passed between layers in the atmosphere and estimating how much torque Venus’ solid surface applies to the base of the atmosphere as the planet spins. Ultimately, the authors conclude that the discovery of the equatorial jet on Venus may help us to understand the mechanism behind Venus’ atmospheric superrotation, although the puzzle is still far from solved. Interestingly, both global circulation models and numerical models produce equatorial jets of varying strengths, indicating that scientists are inching closer to a better understanding of the unusual behavior of Venus’ atmosphere.

Watching the transit of Venus